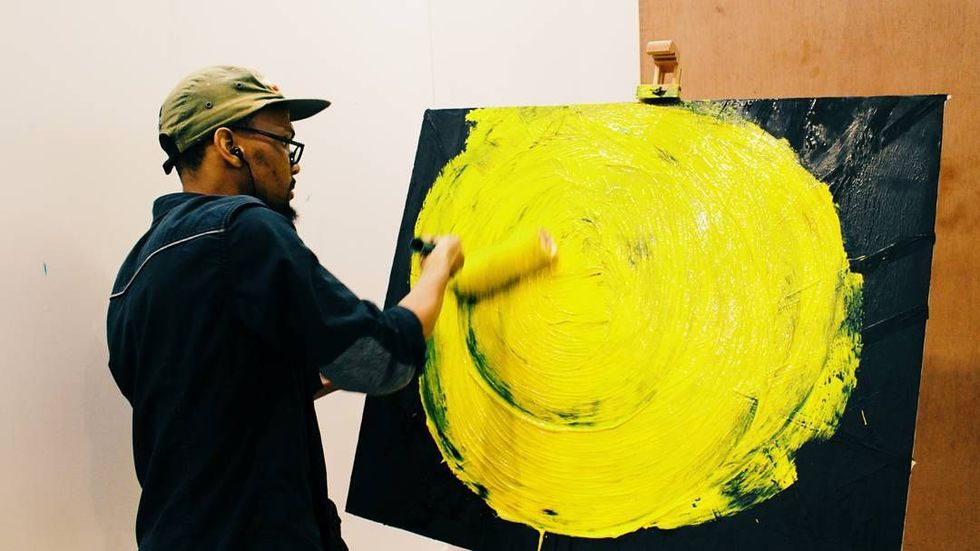 Okayafrica touches base with Olatunde Alara, who participated in ART X Lagos' 'Intersections' live performance art this past weekend.

Olatunde Alara is a member of a growing crop of Nigerian artists who are exploring a variety of artistic mediums, topics and in turn, refuting the singular definition of “African art.” His collection of collages released in 2013 combined satire and mixed media to address issues such as patriarchy, religion and politics.

As a participant at ART X Lagos, Alara performed as part of the live Intersections performance, which brought together Nigerian visual and musical artists, as well as a producer, to create a body of work. Before his performance, Alara talked to Okayafrica via email about the role of music in his work, his foray into mixed media art and how sociopolitical issues influence his artwork.

Ashley Okwuosa for Okayafrica: You often call yourself a “failed graffiti artist”, but for people who are just being introduced to your work—how would you describe your aesthetic?

Olatunde Alara: My aesthetic is founded on a DIY ethic and approach, which is motivated by the idea of creating art with very little but doing so very efficiently.

Can you talk to us about your collection of collages from 2013? How did the idea to use that medium come to you?

So, I decided to pursue art full time in 2013 but there was slight problem, I didn’t have access to materials because I was broke. My brother is really into fashion and he had a pile of fashion magazines lying round, so I decided to try it out and see what I could come up with. I spent about six months just constantly creating collage based art and I was able to see growth, so I decided to explore further.

A lot of your collage work from 2013 is a direct response to social and political issues affecting Nigeria. How did those issues influence the creation of those pieces?

Some of the themes explored from my early collage work either directly affected me—for example, classism and its pervasiveness within the Nigerian society—or were issues that affected those around me, like sexism and patriarchy. Seeing as these issues were close to home for me, it only made sense that they were explored, especially since most of the artwork that deals with socio-political themes are usually one dimensional and only deal with corrupt leaders while ignoring nuance and how different intersecting factors affect the average Nigerian.

How was that collection received by the larger audience?

Most people thought the work looked too “foreign” because I wasn’t creating art that referenced issues that most of the Nigerian audience engaging with the art could connect to. Up until they were purchased recently, most of the work was somewhere catching dust.

How has social media contributed to redefining what is considered contemporary art in Nigeria?

I think it has given artists who are not necessarily creating art that fits into the mainstream a platform to get their work across to a larger audience independently. For example, I was having a difficult time getting galleries and other art institutions interested in my work, and social media not only provided me with a platform to showcase my work, it also gave me the agency to create the type of artwork I wanted without having to worry about whether it looked “Nigerian” or not.

As an artist working and living in Nigeria, what are some of the challenges you encounter?

There is still a lack of proper exhibition spaces that are accessible to the average artist. I am also of the opinion that most Nigerians have a very limited tolerance for diversity in art, although that perception is slightly changing now. But most people are used to engaging with mostly traditional looking artwork, which makes it hard for artists such as myself that are interested in exploring non-traditional mediums and styles. There’s also a culture of mediocrity which doesn’t receive a lot of resistance because some artists are not really concerned with maintaining high standards. Instead, they are more concerned with the superficial aspects, like being famous or having lots of Instagram likes.

What are some resources or initiatives that you would like to see implemented in the art industry to help grow and sustain it?

More art education and workshops for young people, so that they’re exposed to art from an early age and it gets them thinking about art from a broader perspective.

This piece is from 2013, for an exhibition that never happened, because they were apparently too "provocative" lol. Needless to say this person was a square, so maybe it wasn't such a bad idea after all. #collage #ink #art #political #misogyny #drawing #oncardboard #typography

You'll be participating in the 'Intersections' portion of ART X Lagos, where you produce work in tandem with musical artists. How does music influence or inspire your work? Who do you tend to listen to when you create work?

Music plays a very crucial part in how I create art—it helps me to better channel and communicate certain moods. Plus, some of my favorite music has some pretty awesome cover art, which sometimes serves as inspiration. I’m currently listening to Earl Sweatshirt, MF DOOM, Mobb Deep, Gravediggaz, D'Angelo, Madlib, and Mos Def amongst many others.

This past weekend, ART X Lagos touched down at The Civic Center in Victoria Island, Lagos and widened Nigeria’s connection to the contemporary art scene across Africa and the world.

If you missed our conversation with Tokini Peterside, ART X Lagos' founder and director, have a look here.