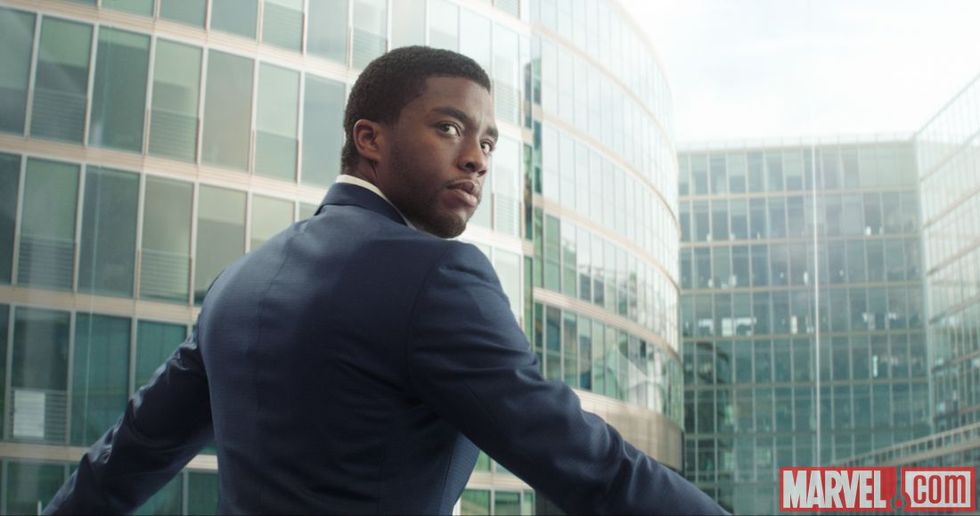 'Captain America: Civil War' has cinema-goers across the continent and the Diaspora talking about Marvel's first African superhero.

Those five letters appeared in big, bold and 3D letters in movie theaters across the world as more than $180 million worth of people in North America and over $675 million globally flocked to see Captain America: Civil War over the weekend. After a brief flashback sequence, the movie's present-day action opens in Nigeria, where we catch up with Captain America (Chris Evans) and his team of Avengers mid-covert mission as they run and fight bad guys in the sea of a busy Lagos market.

The latest in the Marvel franchise, which some are hailing as the best yet, Captain America also marks the official cinematic debut of the first African superhero in the Marvel universe: Black Panther, aka T'Challa, king and protector of the fictional African nation known as Wakanda. In the movie he’s portrayed by Chadwick Boseman, who’s signed on to star in at least five Marvel films, including the first standalone Black Panther movie in 2018.

A portion of the opening Lagos scene

Indeed, Captain America has cinema-goers and comic book fans across Africa and the Diaspora talking.

Okayafrica’s own CEO, Abiola Oke, who watched the movie in Johannesburg over the weekend, mentions that he was giddy like a kid at a candy store as he watched Captain America, Iron Man and Black Panther face off. “They didn’t make Africans look sub-par. They didn’t belittle us. Black Panther was a strong character with no sort of caricatures or African exaggerations.”

“Even just the significance of seeing Lagos as a location choice on screen.”

For the Nigerian comic book startup Comic Republic, seeing their hometown portrayed in the opening scene was a pleasant surprise. “We all gasped in excitement as the words LAGOS crept up on the big screen,” Comic Republic CEO Jide Martin and Marketing/Communications head Eduvie Oyaide tell Okayafrica. “It was a beautiful feeling.”

#CaptainAmericaInNigeria trended for hours as Nigerians on Twitter shared memes about what it would be like to have superheroes roam the streets of Lagos. Some joked about the city’s fuel shortage and power failures. Many agreed that Captain America would stand no chance against corruption in Nigeria.

“We were excited to see more people recognise the importance of heroes as icons,” the Comic Republic team tells us. “We loved that this movie helped add some more spark into a conversation we’ve kept alive for over three years.”

They did find one problem with the opening Lagos scene: the city’s name was mispronounced. “A friend of the house, Okechukwu Ofili, puts it quite succinctly: It should be Lay-gos; Lay as in Lays chips should not be that hard to pronounce.” Also, they would have loved to see more of Lagos’ beautiful sites make it on the screen, though they agree that the market scene was spot on.

Interestingly, the sequence was actually shot at Pinewood Studios in Atlanta. Roye Okupe, creator of the Nigerian superhero Wale Williams, tells Okayafrica that despite knowing about this going in, he felt the filmmakers did a pretty decent job depicting Lagos. "From public transportation to wardrobe and even the uniforms the police officers wore, things were pretty accurate" he says. Although one thing was missing: it didn't really "sound" like Lagos, says Okupe. "I was hoping to hear someone speaking Yoruba or pigeon English, or at the very least hear some Naija music thumping in the background."

For Comic Republic, Black Panther’s debut is further confirmation that they’re in the right place at the right time. “There is now an increase in awareness in the need for diversity and inclusion in all spheres of life,” they tell Okayafrica. “It is a great delight that Black Panther and T’Challa specifically were portrayed in a positive light. It was a beauty to behold. He was epic.”

And while they agree that the movie succeeds in showing that Africans fit perfectly into the superhero universe, Comic Republic dream of the day that the “African superhero” becomes destigmatized. “We never hear the term ‘western superheroes’” they say. “[Our] job is done when these African superheroes are just known as superheroes as well. No labels just an appreciation for the act who happens to be African.”