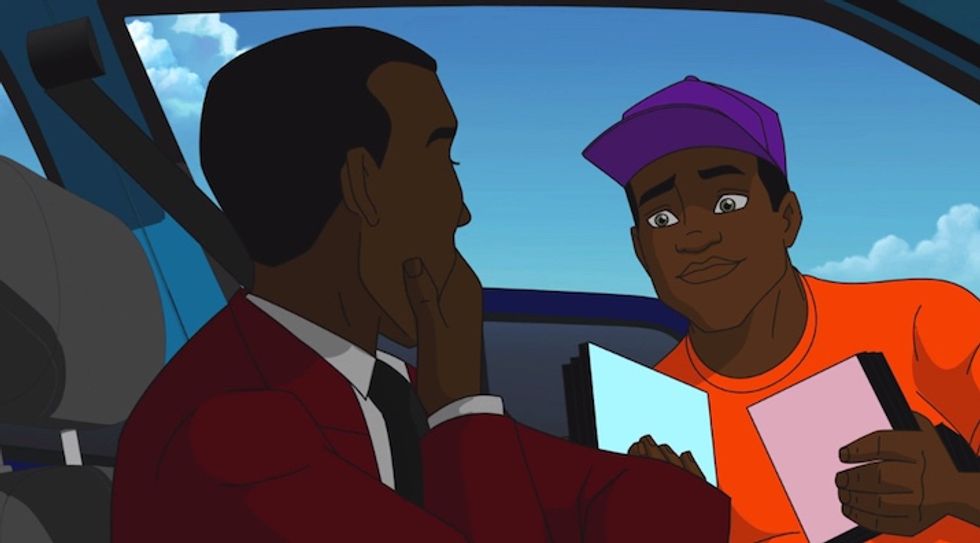 E.X.O.: The Legend of Wale Williams is a forthcoming graphic novel trilogy centering on a young Nigerian named Wale Williams who returns home to investigate his inventor father's disappearance in a country overrun with corrupt leaders and robotic exoskeletal drones known as DREDS. Set a decade in the future in the Lagos Island-inspired Lagoon City, part one of the superhero series sees Wale inheriting a Nanosuit which gives him superhuman abilities that he uses to protect the city from The C.R.E.E.D, a radical extremist organization that aims to eradicate Lagoon City's "myopic government." This recent addition to the emerging canon of African superhero stories is the brainchild of Lagos-born digital animator and YouNeek Studios founder Roye Okupe, who began developing the project after noticing a lack of characters with African origins that fans of the genre could relate to. We recently spoke to Okupe over e-mail to talk about his inspirations for the afrofuturistic graphic novel and what he sees for the future of African superhero stories.

Okayafrica: What drew you to develop a superhero story with a Nigerian protagonist?

Roye Okupe: From the first day I laid my eyes on the Teenage Mutant Ninja Turtles cartoons in the '80s, I've been hooked on superheroes. Since then I've watched, played and read every single superhero-related title I could lay my hands on: movies, comics, manga, anime, graphic novels, animated movies/series, video games etc. Then in 2008, after noticing there wasn't a lot of diversity within the genre, I decided to tell a story about a hero from Nigeria.

OKA: Were there any particular superhero characters or graphic novels that inspired the project?

RO: Not necessarily. EXO is a culmination of ideas I've had running through my mind, probably since I was 5.

OKA:What impact do you hope your project will have?

RO: My mission with EXO: The Legend of Wale Williams is to put Africa on the map when it comes to telling superhero stories, be it animated or through superhero comics and graphic novels. We have so many people with a wealth of creative and appealing stories on the continent, but they never really get the proper commercial exposure. I myself experienced this when I approached investors and distributors. I was told it was a great idea, but there was no fan base for this sort of product. But I refuse to believe that. I believe if done properly (great script, good production values etc.), Nigerians, Africans and people all over the world will be receptive. We don’t necessarily love characters like Superman, Batman or Spiderman because of their place of origin. We love them because they have great stories we can identify with. That's why I took my time (5 years so far) in developing the story and characters. My hope is that EXO fulfills my lifelong goal of adding something unique to the superhero genre.

OKA: When will the series be available?

RO: The graphic novel will be released first (this summer). While there are very early plans in motion for the animation, there is no set release date as of yet. We’re hoping to build a strong fan base with the book, using that as impetus to eventually produce the animated feature.

Update 4/11:Okupe launched a Kickstarter campaign for 'E.X.O.' earlier this. He's also shared the first chapter of the novel ahead of its August release.