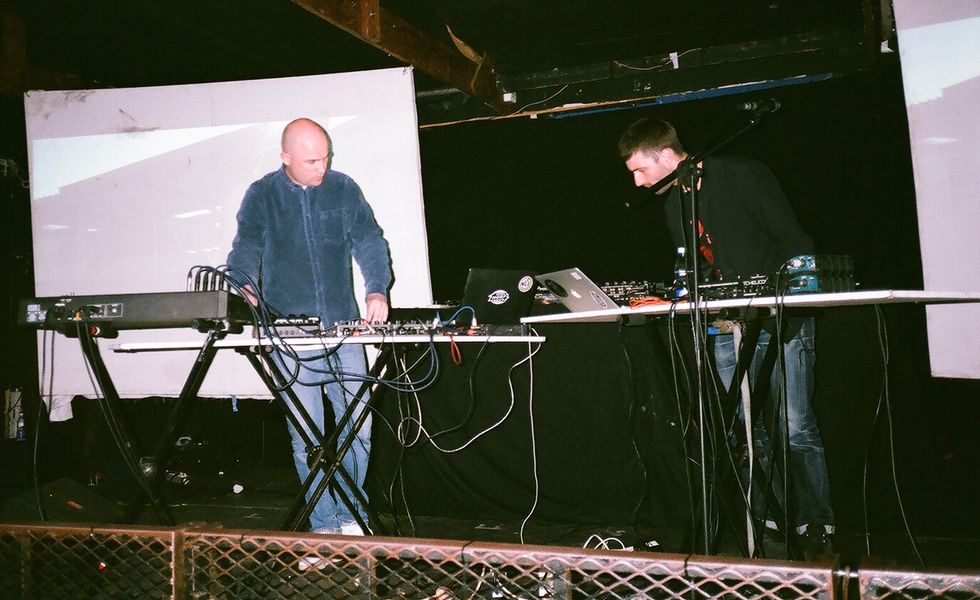 Okayafrica sits down with Darkstar during the UK production duo's recent trip to South Africa.

In 2015 Aidan Whalley and James Young of the UK production duo Darkstar set out to document the young voices of a town in Northern England not far from where they grew up. They began meeting with teens and early-twenty-somethings in Huddersfield, Yorkshire––a halfway point between Whalley and Young’s own hometowns––and used the recordings to shape the sounds, lyrics and emotions of their brilliant third studio album, Foam Island. The result was an unprecedented look into the lives of a neglected British youth as well as one of the year’s most brilliant offerings of electronic music.

“We wanted to talk about life for people in their late teens and early 20s in 2015, but avoid that ‘grim-up-north’ clichéd perception” says Whalley. “We wanted a full picture, not just something that was heavy on the heart, but something that reflected a positive as well as an ambivalent side to how young people feel right now. These themes should be recognisable to anyone in the world right now.”

The British Council Connect ZA and Encounters South African International Documentary Film Festival invited the group to South Africa this month. Over the course of a week, Whalley and Young brought their Foam Island social experiment to Cape Town and Joburg, meeting with South Africans, hearing their stories and weaving those sounds and images into a pair of live performances in both cities.

I caught up with Whalley ahead of the group’s show at The Good Luck Bar in Jozi.

Aidan Whalley for Darkstar: We just flew from Cape Town. It’s going quite well. It’s our first time in South Africa, first time in Johannesburg. We’ve been in Cape Town for almost a week. We arrived on Monday. We’ve had a busy week. It’s been really good. We’ve tried to condense as much as we can in the space of a week and collect as many recordings, which we’ll be feeding into the live show for tonight. We’re going to perform in Johannesburg and then we’re back in Cape Town for the second show tomorrow night.

I’d like to get a better understanding of your last record, Foam Island. What brought you guys to Huddersfield?

We decided to go to Huddersfield after being in London for a little while recording our first record. We wanted to get out of the city, get a different environment, change of space. We were all from the north, and Huddersfield was sort of a place in between where the three of us were from [at the time, Darkstar had a third member]. And we just decided on renting a house in the countryside there to write what was News From Nowhere. Huddersfield then became a place that we spent and wrote a record. We felt like there was more to explore in that part of the world, so that was the start of the idea behind Foam Island.

For those who might not be familiar with the socio-political and economic climate, what should we know about Huddersfield and communities like it?

There’s a lack of representation in politics for younger generations. Or there was at least when we were doing the record. There’s a lot of people not engaged with politics because they feel like they’re not represented, and they in turn don’t have much to do with it. Because it was the year of the general election, we had an idea to include voices with atmospherics and ambience and create an atmosphere with voices and music together. We felt that with it being a general election year that it was a current topic and quite a fitting topic to focus on, and that would be the sort of thread that attached everything together.

And what were some of your findings after speaking with the kids there?

There’s a lot of good things going on there, and there’s some amazing people. We made a lot of friends there. It was in these small pockets of the UK, and also it translates to further afield, different countries, different parts of the world, that there are really interesting things going on, and people have a sense of pride about their local community and families. There’s a lot of nice things going on, but people don’t document it in a positive light. It’s very stereotypical sometimes about the north of England––you always get “it’s a bit grim up north.” We wanted to avoid that stereotype and paint a picture that was like, “yeah, there is some hard shit going on there and there’s not many opportunities for some people, but there’s another side to it which is really beautiful.”

Do you see any parallels with Huddersfield and South Africa?

Yes and no. Obviously within the people and the sense of character and friendships and families, those sorts of things, yes. But here everyone’s way more politicized. It doesn’t take long conducting interviews over here to get down to politics very very quickly.

What took us a year in the UK, we only have a week to do here. So we’re only scratching the surface. What we did in Huddersfield is we met people, established relationships, they introduced us to their friends, and it was an ongoing thing for a long time.

What have you been doing here in SA?

We’ve been meeting a lot of people from all different areas, really. We went to the CBD of Cape Town, we went to Khayelitsha, we went to Mitchells Plain, and tried to talk to as many people as possible, and just get an idea of what’s going on around there. And the thing is, because we come from sort of a stance through music, and we get to talking about certain things, you tend to end up with other creatives and other musicians. Just by chance really. It’s just serendipitous.

When we do the performance you’ll hear the voices and you’ll see. We have a filmmaker called Cieron Magat that did our visual stuff in Huddersfield as well. He came with us, so he’s been documenting it all on film. And he’s editing still right now, just before the show.

What should we expect tonight?

You’ll expect a Darkstar set, which we hope will be inspiring, unique and also make people dance.

Did you know much about South Africa’s electronic music scenes before coming here?

Not so much, a little bit. There’s a guy called Nozinja who’s on Warp Records. And then obviously DJ Mujava. “Township Funk” was a massive tune in the UK and all of Europe. I know about Gqom. And I’ve also been introduced to DJ Fosta.