Hommage to DJ Arafat, the King of Coupé-Décalé 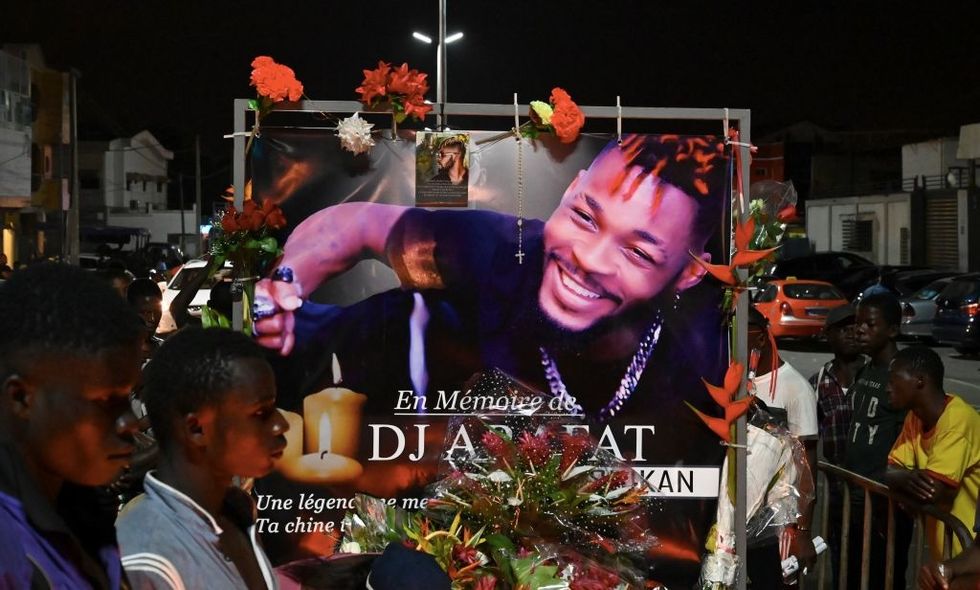 Fans pay tribute to DJ Arafat at the site of his motorcycle accident in Abidjan. Photo: ISSOUF SANOGO/AFP/Getty Images

A nation mourned. Europeans mourned. Africans worldwide mourned. Abidjan, his home, is said to have been cloudy all day.

Fans cried and screamed in front of the hospital his body lay as well as his home. They chanted, "Il n'est pas mort" ("he isn't dead"). The King of Coupé-Décalé was gone.

Fans cry outside a hospital in Abidjan where DJ Arafat was taken after his accident. Photo: ISSOUF SANOGO/AFP/Getty Images

A petition would launch to celebrate his life in Abidjan's biggest arena, Le Stade Félix Houphouët-Boigny, nicknamed Le Félicia, a stadium holding 50,000 he never had the chance to fill while alive.

At just 33 years old, he left a void in the music industry and it is uncertain it will ever be filled. His career had spanned 16 years and he had produced 11 albums.

DJ Arafat, born Ange Didier Houon on January 26, 1986, was raised in Yopougon, a commune in Abidjan, the son of Tina Glamour, a controversial musician reproached for her risque dance moves and Houon Pierre, a prominent sound engineer. He was predestined to make music.

He would get his start as a DJ in his hometown. His song "Hommage a Jonathan" about a friend whose untimely death was brought on by a motorcycle accident would ironically catapult his career. He would leave for France and so overstay his visit that he would be placed in detention as an undocumented migrant. After a French tour, he would decide to set up shop in Paris, despite not having the proper documentation to do so. He would start deejaying in french clubs and selling burned CDs and would eventually be apprehended by police and sent back to Abidjan.

Like many icons before him, he suffered for his art. He was an extremely talented individual lauded for his ability to produce, infuse rock into his sounds, drum, capture audiences with onomatopoeia-filled chants and create such technical dances as "Gbonglor," "C'est Moi," "Lebede," "Dosabado," "Kpangor," "Zoropoto," "Kpankaka," "Maplorly," and "Moto Moto." To dissect the complexity of these dances would take more time than we have here. It goes without saying, Ivory Coast's dance scene owes him all the accolades. Despite the aforementioned, his career was marred by controversies ranging from domestic abuse to social media disputes. Still, he pushed forward as prolific as he was when he first stepped onto the scene.

It's important to note the innovator's mastery of personal branding. He adopted a variety of names: Yorobo 5500 volts, l'Apache 8500 volts, Yorobo 10500 volts, Yorobo 12500 volts,Yorobo 100000 volts, commandant koné zabra, and commandant Koné Baracuda. The last name that stuck was le President de la Chine(The President of China) and his fan base was dubbed la Chine(China), a metaphor for the scale of his influence. He moved a young generation through his use of social media, news channels and engaging videos. He was unafraid to tell it like it is and reminded us of his greatness every chance he got.

His loss hit hard, for despite his flaws, he had transcended every division present in his country. He had triumphantly fallen and risen time and time again. As fans watched the video of his accident, they hoped he would rise again. That his life would end on a motorcycle seems too surreal. He had alluded to his death in this manner, in the past—surely this isn't something he wanted to manifest. His advocacy of Africa's urban music had remained consistent.

A memorial service is set for August 30th in Le Stade Félix Houphouët-Boigny. More than 100,000 fans are awaited in the stadium in Abidjan.