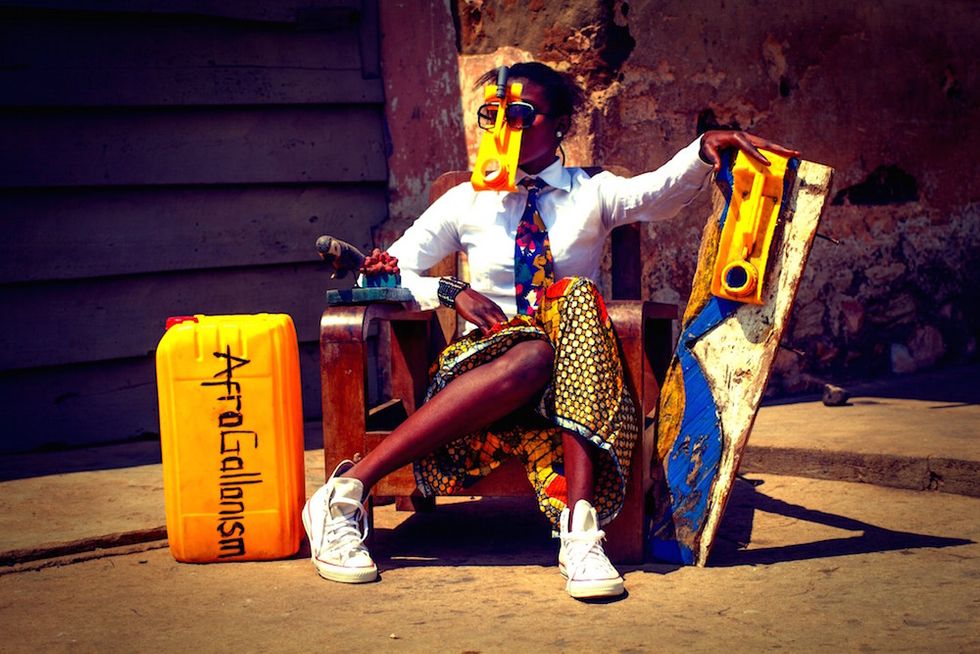 This Ghanaian Independence Day, Accra is getting a new addition to its art scene. We talk with Gallery 1957's Creative Director, Nana Oforiatta Ayim.

Serge Attukwei Clottey, Awaiting (Europe in the Eyes of Africa Series), 2013, ® the artist, courtesy of Gallery 1957

On March 6, 1957, Ghana became the first African nation to gain independence from European colonization. On the 59th anniversary of Ghana’s independence next Sunday, Accra-based artist Serge Attukwei Clottey and his GoLokal performance collective will burst into a luxury 5-star hotel dressed in their mother’s clothes.

GoLokal’s performance, "My Mother’s Wardrobe,” marks the official opening of Gallery 1957, the latest addition to Accra’s already buzzing contemporary art scene. Founded by British Lebanese-born collector Marwan Zakhem, the new space will present exhibitions, installations and performances by Ghanaian artists, old and new. Okayafrica spoke to Gallery 1957’s Creative Director, Nana Oforiatta-Ayim, about her vision for the gallery and how she plans to use it to engage audiences and profile the work of local artists.

On the surface, her position at the gallery seems like a change of direction for the cultural historian and filmmaker, who tends to focus her work outside of the confines of ‘white cube’ style spaces. One of her ongoing projects is the Living History Hub, where small kiosks, initially set up in different regions of Ghana, become centers for collecting oral histories managed by local communities.

Oforiatta-Ayim admits 1957 may look like a departure from her usual projects, but explains that she wants to “treat it more as a concept than a space.” The concept is to touch on a type of Ghanaian art history each year. She says they hope to profile local artists who also have an international presence in the first year, focus their attention on up-and-coming artists from the younger generations in the second year, and look at the work of the contemporary art veterans of the 60s, 70s and 80s, as “foremothers and forefathers of the artists who are working now,” in the project’s third year.

But, how does Oforiatta-Ayim intend to ensure this concept reaches a wide range of audiences with its location being the 5-star Kempinski Hotel? Aware of the risk of touching only a certain demographic of people in Ghana’s capital, she notes, “I insisted when I took the position that for every single exhibition I do at 1957 there is going to be a correlating public exhibition, for example in a market place.”

Studio of Serge Attukwei Clottey, work in progress for My Mother's Wardrobe. ® the artist, courtesy of Gallery 1957

Along with the need to make Ghana’s contemporary art accessible to a wider audience, these sort of community-oriented exhibitions make sense for artists like Serge Attukwei Clottey and Zohra Opoku, whose work centers around the public. Clottey’s opening show will see between 50 to 100 members of his community perform. “I like the idea of opening the boundaries — what is a 5-star hotel anyway? And who can have access to it?” Oforiatta-Ayim says.

An important part of Oforiatta-Ayim’s vision is collaborating with organizations that already promote arts and culture in Ghana, such as the Foundation for Contemporary Art Ghana and the Nubuke Foundation. One of the gallery’s initial activities is at Asa Baako, a music festival in the Western Region fishing village of Busua. Oforiatta-Ayim also plans to develop films, publications and workshops through her own organization, ANO, in order to explore the issues covered by the gallery's participating artists in greater depth.

There’s also an important practical element that 1957 is adding to Accra’s creative scene. “The thing we’re all lacking here in Ghana is funding,” says Oforiatta Ayim. But gallery owner Marwan Zakhem hopes to work with other organisations to build a stronger infrastructure for the arts in Ghana, where artists must often seek out opportunities overseas. And while Oforiatta Ayim says “we’re getting along quite nicely on our own,” the curator is excited at the prospect of improving the sustainability of the arts in Ghana through a space that hopes to empower Ghanaian artists to not just carry out their projects, but also to make a living from them — without having to leave home.

Gallery 1957 officially opens its doors March 6 with an opening reception and performance by GoLokal at 5pm. Serge Attukwei Clottey’s exhibition, “My Mother’s Wardrobe,” curated by Nana Oforiatta-Ayim, is on view March 7 to May 20, 2016.

Alice McCool is a freelance journalist and masters student at the University of London’s School of Oriental and African Studies. You can tweet her at @McCoolingtons.