Here's What Happened at OkayAfrica and Global Citizen's Next 100 Summit 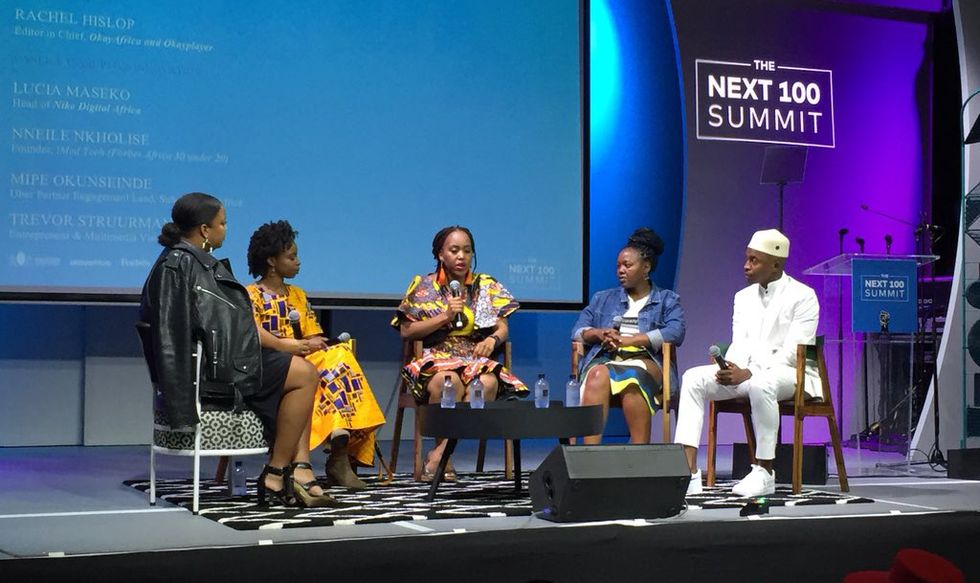 If you missed any of the action, you can watch it now on our live stream.

OkayAfrica and Global Citizen teamed up yesterday for the first-ever Next 100 Summit a the Venue at Melrose Arch in Johannesburg.

It was a day packed with panels, performances and talks all in honor of Nelson Mandela's legacy. The event brought together a number of thinkers, doers, artists and performers with the shared mission of exploring ways to continue Madiba's work as we head into the future.

Next 100 began with opening remarks from Azania Mosaka, before an opening prayer and performance by the Grammy-award winning Soweto Gospel Choir. You can check out a shot clip of their performance below.

The first panel of the day was hosted by OkayAfrica and Okayplayer CEO, Abiola Oke and focused on the topic "Economic Inclusion and Exclusion in Africa." Speakers included South African actressPearl Thusi, president and chief executive of Sebvest Holdings George Sebulela, CEO of Goodbye Malaria Sherwin Charles and founder and CEO of The Moloto Capital Investments, Merafe Moloto.

“It’s time that we as Africans make the stand and stop relying on others for solutions.” - Sherwin Charles #Next100Summit
— OkayAfrica (@OkayAfrica) 1543491172.0

Mipe Okunseinde describes a disruptor as someone who’s not only asking the questions, but answering them as well.… https://t.co/WRk8rnhuZY
— OkayAfrica (@OkayAfrica) 1543494765.0

Here a few memorable quotes from the discussion:

“To run the world, we have to run corporations, not just work for corporations.” - Makaziwe Mandela-Amuah #Next100Summit
— OkayAfrica (@OkayAfrica) 1543500384.0

“Sisterhood means being brutally honest with each other to encourage growth. And it’s also about being there for ea… https://t.co/DmDX4YfOmd
— OkayAfrica (@OkayAfrica) 1543500472.0

The second part of the summit included a concert, that saw some of the most innovative artists in South Africa hit the stage including DJ Doowap, Amanda Black, Samthing Soweto, Nonku Phiri and The Soil.

If you missed any of the action yesterday, don't fret, you can check out the full live stream of the event below.

GLOBAL CITIZEN AND OKAYAFRICA PRESENT: THE NEXT 100 SUMMIT & CONCERTyoutu.be