South Africa: I Voted Today and I've Regretted Nothing More​ 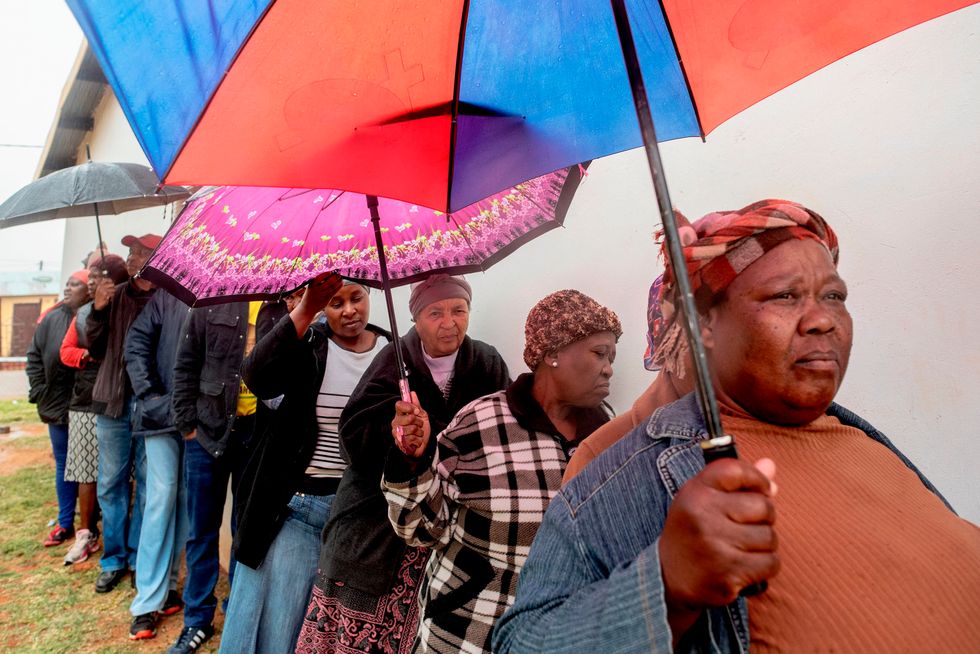 People queue to vote for South Africa's national and provincial elections at a polling station in the Tlhabologang township in Coligny on May 8, 2019. - South Africans voted on May 8 in the country's sixth democratic general election since the end of apartheid in 1994. (Photo by LUCA SOLA / AFP) (Photo credit should read LUCA SOLA/AFP/Getty Images)

Op-Ed: They say we need to vote because people died to win us this right. The gag is, people are still dying needlessly even though they have it.

Yesterday was the sixth year anniversary of my father's death. He died from colon cancer in a government hospital that forgot to let us know that he even had cancer to begin with. After being treated with such indignity for months, day after day, the cancer is not what killed him. He simply pulled out the tubes of his ventilation machine. He'd had enough and I have never held that against him.

As I stood in the long queue to vote in today's elections, I considered turning back and going home numerous times. ''Walk away before you get to the front" is what I kept telling myself. But I eventually voted because that's what politically aware and responsible citizens do—even when it doesn't seem like the responsible thing to do personally.

I placed my "X" next to the United Democratic Front (UDM) which is a minor political party led by Bantu Holomisa. I've watched countless interviews with Holomisa speaking about his political party and even after reading the manifesto, I don't feel I made a bad decision.

The UDM is a decent party. But in spite that, I don't believe my voting for them will change anything. I believe this cynicism is precisely why many South Africans have experienced such inner turmoil about deciding who exactly they'll be voting for today, although many may not admit it openly because of the can of worms that then opens.

Some of you may roll your eyes or even scoff at the idea of not voting. "We vote to bring about change" and "You can't complain if you didn't vote" is what you're saying. And you're not wrong but you're not entirely correct either. Have we not been voting all along? Do we not still find ourselves in a country where the government is literally still killing off its citizens with impunity despite our votes?

We voted and yet the Marikana massacre still happened.Thirty-four miners were murdered and we have the footage to prove it. And yet, Cyril Ramaphosa, who was a "non-executive" shareholder in the large mining company has never offered us or the families of the deceased an explanation. He's never apologised to a child who learnt of their father's death as they watched him flailing on the ground—on television.

We voted didn't we?

What about the 143 mentally-ill patients who died as they were being moved from the Life Esidimeni institution like cattle on the backs of pick-up trucks? Whole human beings who were treated like fractions and died without any dignity while being herded from a place whose name literally translates to 'place of dignity'.

Did those patients not vote?

I stood in the queue with a number of nurses who had come to vote along with some of their patients from the government hospital nearby. The patients were dressed in ragged gowns with numbers on the back and their IV lines were still in their arms. Despite their appearance, they looked determined. "If I just vote, things will get better" is what I read in their eyes.

I wondered if they'd even survive their stay at the hospital to see any change at all.

Vote for the party that promises to bring about change especially when it comes to the poor and the failing health system. Which party is that? The EFF steals from the poor whose plight they purport to champion, the ANC is only getting by because if its seemingly sacrosanct "liberated us from Apartheid" status and the DA, well, what about the DA?

If our own government officials only ever receive private healthcare or alternatively fly off abroad to get the very best treatment there is, what would honestly compel them to do anything about the disgusting state of government hospitals here?

But we vote anyway, because change, right?

Before today, I could never have imagined not voting. I didn't comprehend the idea of boycotting the vote as a form of protest. Now I'm beginning to see it.

I'm in no way saying that the electoral process will get us absolutely nowhere. Sure, some things will change for the better. Perhaps politicians won't steal as much, maybe Chris Hani Baragwanath hospital will get extra beds and patients won't have to sleep on the concrete floor. Perhaps, we'll make strides in bridging that huge inequality divide and we won't make the cover of Time for all the wrong reasons as a country. Perhaps.

The only "change" of late are the few silver coins I occasionally give the homeless guy at the traffic light before I roll up my window because I have nothing left to give the other homeless guys at the next eight traffic lights ahead.

But today, today was markedly different. Perhaps it's because I feel that the one time that voting ever really mattered was when we wanted Apartheid gone. That was revolutionary. That mattered.

Perhaps it's just the gloomy weather or the fact that I miss my father, but I just don't believe that voting is a revolutionary act anymore and I'm uncertain as to what is.

And it is precisely because of this realization and willingness to admit that to myself that I feel I really shouldn't have voted today.