In Conversation: The Cast & Crew of 'The Burial of Kojo' On Representation, Power & Filming in Ghana 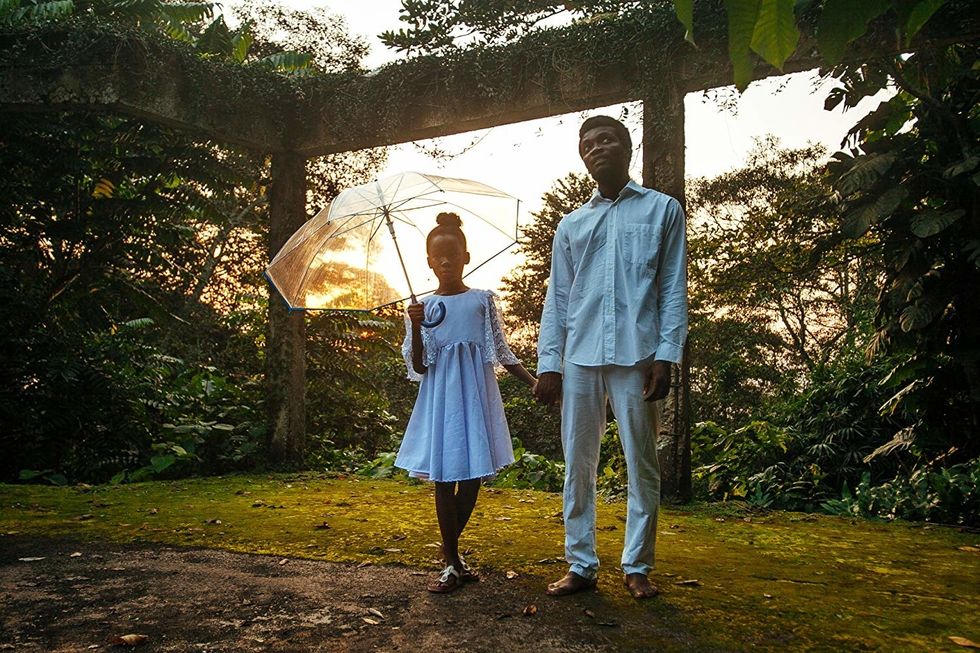 Joseph Otisman and Cynthia Dankwa as Kojo and Esi. Photo by Ofoe Amegavie via 'The Burial of Kojo's' Kickstarter page.

We catch up with the minds and faces behind Blitz the Ambassador's 'The Burial of Kojo.'

After the success of Black Panther, Get Out and Moonlight, critics have said that production companies are finally realizing the importance of producing major motion pictures about black life and the African diaspora. But that's flawed. Not only does it give too much credit to production companies that give these movies the green light, it also denies that filmmakers of color have always wanted to tell these stories—and that most already do, but it rarely makes it to the mainstream or Oscars.

A more accurate statement is that movies about black life and the diaspora exist, many more yearn to be made and they are thankfully getting more visibility and love than before. Right now, more than ever, inclusive and intersectional storytelling is necessary to the fabric of our humanity and understanding of how to live more compassionate lives.

Blitz the Ambassador, the musician, writer, director and artist who crowdsourced and created his first full feature film in under a few years, released The Burial of Kojo for limited viewing last month. It's amazing and inspiring that a film of this magnitude was funded by eager fans and hopefuls, but bringing this story to life is more intricate than we will ever comprehend.

From the narrative to the production and Ghanaian cultural complexities, The Burial of Kojo is an essential addition to the conversation on black filmmaking in the Trump era—especially in a nation where films about Africa typically involve war, poverty and despair.

The Burial of Kojo follows Kojo, a man who is tormented by the guilt of accidentally killing his brother, Kwabena's, wife. Kwabena seeks revenge years later by pushing Kojo into an abysmal pit. It is up to his wife and intuitive daughter to try and save him before time runs out.

Light spoilers ahead—but don't worry, we left out all the pivotal moments in the film for you to experience in time.

On Representation and Power

Blitz: "I've been wanting to make a film for a long time that told the right story and is representative of who we are as a people and the nuances in family structures. I've been searching for 5 years for the right story to tell. I thought siblings would be the perfect place to explore this, because often there are rivalries that run deep in families.

When I went back home (to Ghana) and learned more about the environment and protecting natural resources, I also [learned more about] galamsey, the local term for illegal gold mining. And it's not so much about Chinese incursion, but who controls what in your country. About how sometimes foreigners have more power than locals.

I wanted a young female protagonist to lead the story. The father-daughter relationship is not something you see a lot in television and film, but also how power is vested in children. But because of that power, the girl-child is always sanctioned, as others fear that power."

On the Role of the Camera

Mike: "A year before we began rolling, Blitz sent visual and literary references for the film—'read this book!' 'read that!'—and we discussed how the camera would be for different kinds of stories. Cameras aren't just visual, they can be a different kind of cue. They add a new vocabulary to a film. Our camera moves—it's not perfect.

We're trying not to make cinema that's reproduced to the western gaze. A lot of times [as] filmmakers of color, we shoot but it's through another western gaze; we repeat the process. It's important for us to redefine or add to what already exists. The camera is not a character, but it shows you how something feels, how it moves, the texture, and the small spaces. It's not afraid."

Joseph: "Being under the mine, it reminded me of when I first filmed in a pit. Where we shot was so bad. I remembered it, and brought it back to this time in the pit. It was 30 feet deep and felt lonely in there. Blitz reminded us not to act—we had to be there, breathe it. It was real.

There are so many choices I made without discussing with the director. I didn't eat the whole day, I took very small water. By the time we started shooting, I was really hungry. Being in the pit made me so uncomfortable and I was really suffering. Psychologically I was trapped—I couldn't just go home, because I was working. In the story too, I'm trapped. It was personal bondage.

When I ate the bug, that wasn't me—that was Kojo. No one had to tell me to do it. I can still remember the movement in my mouth. Weeks after filming, I was eating food and there was a fly in it. I thought—ah! I cannot eat this. But then I remembered the roach I ate. I ate the food, and later my stomach was paining me. I was really there as Kojo in that mine."

Cynthia: "Watching the show (telenovela) with my grandma. It was fun because we are in a movie too."

Blitz: "The story is told from the child's memory. When she's telling the story, it's a fairytale of how her parents met. Kids who live in a dysfunctional home sometimes paint a rosy picture. Then it (the story) goes into the mother leaving and coming back—that's the memory of her mother: inconsistency. You later find out why the mother is this way.

The more mystery the mother had, I felt the stronger she was. She steps in when Kojo gets stuck in the mine and you realize she's always there, it's not just the child's memory. Because of what happens to Kojo, the father, the daughter constantly centers the father.

The actress I cast (to play the mother) is naturally so expressive, so nonverbally expressive, that I thought it would be redundant to verbalize. We feel everything she's going through in her face. Because of how powerful she was nonverbally, it balanced out well with the other characters."

Blitz: "The way western culture processes the afterlife is through ghosts, and it's a very spooky process. It throws people off in this movie, because spirits and crows aren't spooky—they're symbolic. The important distinction between ghosts and ancestors. Ancestors want what they want. They're not here to scare you, they're here to get what they want. Several people I know have personally experienced family members returning. I wanted it to feel real. It helps us set up an important twist in the film. When you make up your assumptions about the characters, you realize they all have twists of their own."

On the Intersections Between Mexican and Ghanaian Culture

Mike: "We celebrate Day of the Dead. It's gotten more mainstream now because of films, but Day of the Dead teaches us that spirits are there, and we aren't taught to fear the spirit world. We have brujas, or witches, who can speak with those in the spirit world. In Day of the Dead, there are three deaths that happen. The first is physical, when your body stops functioning or our vessels stop working. The second is when you can't be seen—when you're put into the ground or cremated. The third death is when nobody alive remembers you. It's real. And it's going to happen eventually to most of us. Indigenous cultures and African cultures are super connected to this, especially going back past Columbus and colonization."

On Color and Storytelling

Blitz: "In terms of African storytelling, literature has done a lot in advancing our narrative. We read phenomenal books that we wish could be films, like The Famished Road. We tried as much as possible to be open ended with The Burial of Kojo.

There were some things that were intentional, like color choices and how it relates to power. Whoever had power wore red, or was lit in red. Whoever didn't have power wore blue, or was lit in blue. And white was our neutral space. When Kojo is first introduced, he's in red. We first see Kwabena in blue. By the time Kojo finds his own sign—a white bird in the water—he is in white, then afterwards her wears different shades of blue. The deeper the color, the stronger the sense of power, and the lighter the color, the less power. By the time he's in the mine, he's wearing dark blue.

Blitz: "We had the great privilege of screening the movie for Ryan Coogler before it got out. To be done and the first thing he says is 'thank you for transporting me'—we were in awe. That transportation is our magic. I'm not saying every African film should be nonlinear or magical, but it's got to be close to us. We often live in a very colonized state of self. What cinema allows us to do is be anthropological. We can break down our society through film. Even with the telenovela—that's an important detail in Ghanaian culture that we got to show on screen!

Usually movies about Africa are very dystopian, more about survival mode. We never get a chance to break down our people. We just end up with a war, and in a war you can't show nuance in family relationships—the film is about survival. The hardest thing to do is humanize a people that has little history in cinema. Hopefully this film brings father and daughter closer, especially back home."

On the Future of Filmmaking in Ghana

Mike: "There are a lot of films being made in Ghana at the moment. But again, how are they capturing it? It's really important. The continent, and across the diaspora, moves. If you try to do a steady shot of a culture and people that moves—even the food moves—if you try to catch it on a tripod, you're going to miss it. You'll miss the vibrancy. When you visit, your eyes are moving. But when you put a camera there, and try to stabilize it or keep it extremely steady, that isn't true to what you see when you visit."

Blitz: "It goes make to a much larger question, which is that of cinematic language. Africa has generally been left out of the conversation; the books. Most people study film and don't have one single class on the African aesthetic and film. That's fucking criminal. Some of those students may be African, and want to make a film, and wonder why it doesn't connect. The reason is because they've been robbed of a very significant thing, which is language. Language is everything. What we did was vocabulary. We're going with it, freestyling sometimes. But overall, we are trying to understand language and culture through film."

'The Burial of Kojo' is currently showing at the 42° Sao Paolo International Film Festival. Keep a look out for screenings in major cities around the world by following the film's Facebook page.