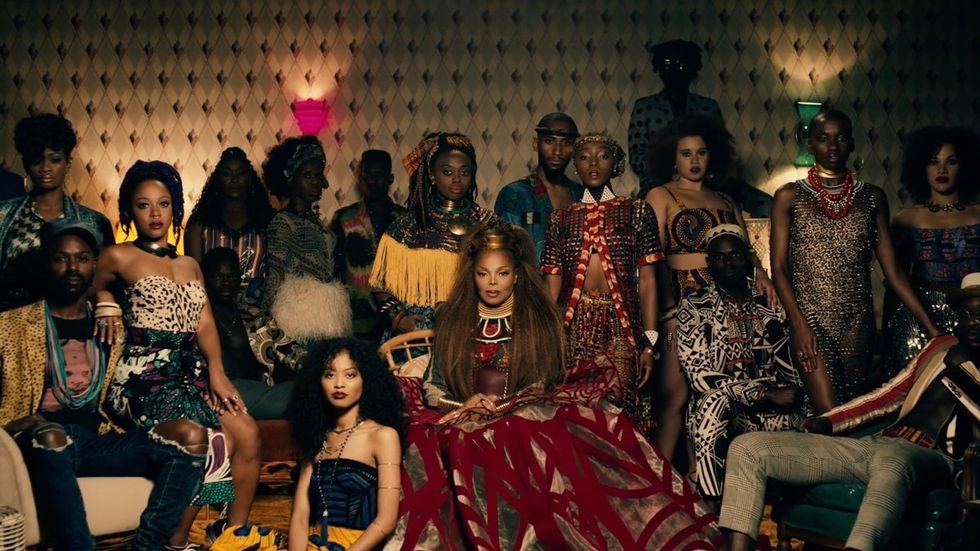 The icon's latest is a nod to the sound, fashion and culture of the diaspora.

Ms. Jackson is back.

The iconic artist returns with her first single since the release of her 2015 album Unbreakable, and it's a timely nod to the "made for now" influence of afrobeats fashion, sound and culture.

On "Made For Now," produced by British-Nigerian producer Harmony Samuels, which features Puerto Rican reggaeton titan Daddy Yankee, Janet Jackson does what she's done successfully so many times throughout her decades-long career: provide an infectious, party-worthy tune that's fun and undeniably easy to dance to. "If you're living for the moment, don't stop," Jackson sings atop production which fuses dancehall, reggaeton and afrobeats.

The New York-shot music video is just as lively, filled with eye-catching diasporic influences, from the wax-print ensembles and beads both Janet and her dancers wear to the choreographed afrobeats-tinged dance numbers, which see the dancers hitting the Shoki at one point in the video. The train of dancers travel throughout the streets of Brooklyn, taking over apartment buildings and rooftops with spirited moves.

It's obvious that Jackson has been studying and drawing inspiration from the culture for some time now. She even hit the Akwaaba dance, popularized by Mr Eazi, during her Icon Award performance at this year's Billboard Music Awards.

The bouncing video, directed by Dave Meyers, features contributions from a number of creatives from Africa and the diaspora who were involved in the creation of the video, including designer Claude Lavie Kameni and choreographer Omari Mizrahi. Ghanaian health guru, Coach Casspointed out some of the many dancers involved in the production on Instagram, who hail from Ghana, Nigeria, Trinidad, Grenada and the US.

Ahead of the video's release, it garnered attention on social media when Jackson was spotted filming in Williamsburg, Brooklyn, wearing what many thought was a questionable fashion ensemble. The outfit in question only makes a small appearance in the video, and we're glad to see that Janet's other looks appear—at least slightly—more coordinated.

Watch the music video for "Made for Now" below. The singer is set to perform the song with Daddy Yankee live for the first time tonight on The Tonight Show Starring Jimmy Fallon, so be ready!