Who Will Make The Great Mandela Film? (Not Justin Chadwick) 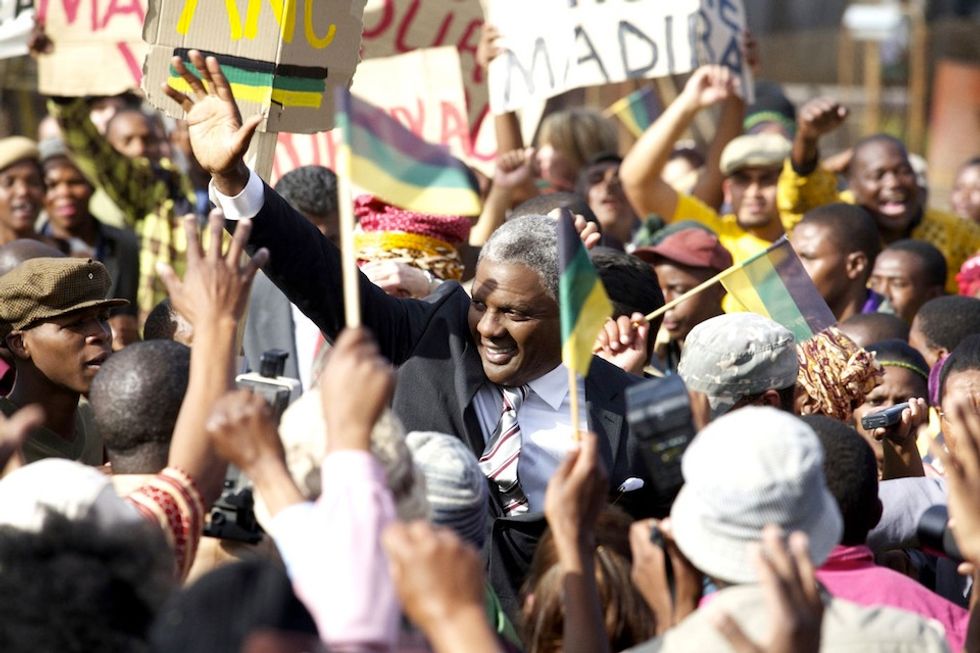 Idris Elba doesn’t look like Mandela, which isn’t a problem. The issue is that he isn’t a South African. This is Hollywood though, and if you want big financiers you need a name and no black South African actor has a name. The main actor not being a South African raises this question: are South Africans just passive watchers in a film about possibly our most important figure? The answer is an overwhelming yes. There is Hollywood and there is the truth. You can’t have both. Elba’s Mandela is all shoulders, booming with his unintentional caricatured accent while he walks through all the postcard locations of South Africa’s black world– the dusty streets of the townships with children running, the sentimental non-racial Harlem-lite of Sophiatown and the expected sun-lit Lion King plains of the Eastern Cape. The movie assumes that these moments create the man, but they’re not enough or really subtle enough in their depiction of his life.

Naomie Harris is perhaps the best actor in the movie. She plays Winnie Madikizela Mandela with fire and grace, both beautiful and terrifying at the same time. However that pesky South African accent almost makes her portrayal of Winnie Madikiizela Mandela comical, every syllable is stretched to ungodly levels, six becomes seeeeeeexxxxxx. I’m surprised that no one has created a meme on Harris’s declaration of “I’m deeefrend” in one schmaltzy scene. I wonder if in Winnie, the filmmakers decided to create the antithesis to Mandela, not only politically, because Robert Sobukwe and the PAC is written out, but also personal. Winnie cannot forgive white people whereas Mandela forgives. Winnie wants blood whereas Nelson wants to end the bloodshed. She is the embodiment of black fury (which is WRONG according to the film) shown in the same light as the black masses, who are too busy murdering each other in the film to concern themselves to the process of nation building. That is only for exceptional negroes like Nelson Mandela. Winnie Madikizela-Mandela and the blacks of the film are all raw emotion. Not the thoughtful peace-giver that Mandela is framed as. F.W. De Klerk can be happy of his manufactured legacy. In the movie he is more important to Mandela’s life than Oliver Tambo or Albert Luthuli.

It is interesting that the most visibly brutal violence is pelted out on Madikizela-Mandela, not Nelson Mandela. It is scenes with her where we see images of violent beating and hints of sexual abuse. And it's in her character where we see the complete degradation of a person by the system of Apartheid. Unfortunately she isn’t afforded the same beatified frame that Mandela is. After his youthful womanising and wife beating, Nelson Mandela in the film can sincerely demand loyalty from her. Their relationship is given no substance, no actual treatment, no scenes where they talk about their issues. Just scenes of finger wagging from Mandela and Madikizela-Mandela saying, “eye hayte dem” over and over again.

As a South African who grew up with Nelson Mandela, the Father of the Nation, Nelson Mandela the man is an unknown quantity. Why did he adopt a non-racial position when the ANC and himself were diehard Africanists? Why does he decide to reconcile with the Apartheid government? Why does he cheat on his wife? What were his influences growing up? Essentially I wanted to know why Nelson Rolihlahla Mandela is the man that he is. Justin Chadwick’s Mandela: Long Walk to Freedom leaves me with more questions and no answers. In terms of the non-racial perspective, the film would have you believe that Nelson Mandela somehow came to the conclusion all-alone, whilst his comrades (those along for the ride) were against it. The film doesn’t refer to the numerous discussions the ANC had to have regarding the non-racial position it would later adopt, or that Nelson Mandela himself would have to be convinced to join this viewpoint.

The film confirms what many already know, that Nelson Mandela is now firmly a world figure. He can now stand with Gandhi and Martin Luther King Jr. as figures of struggles that have seen their image and beliefs watered down to their most marketable points, which is what happens when Hollywood gets a hold of you. Don’t be surprised if you see Nelson Mandela’s face selling iPods in the not too distant future.