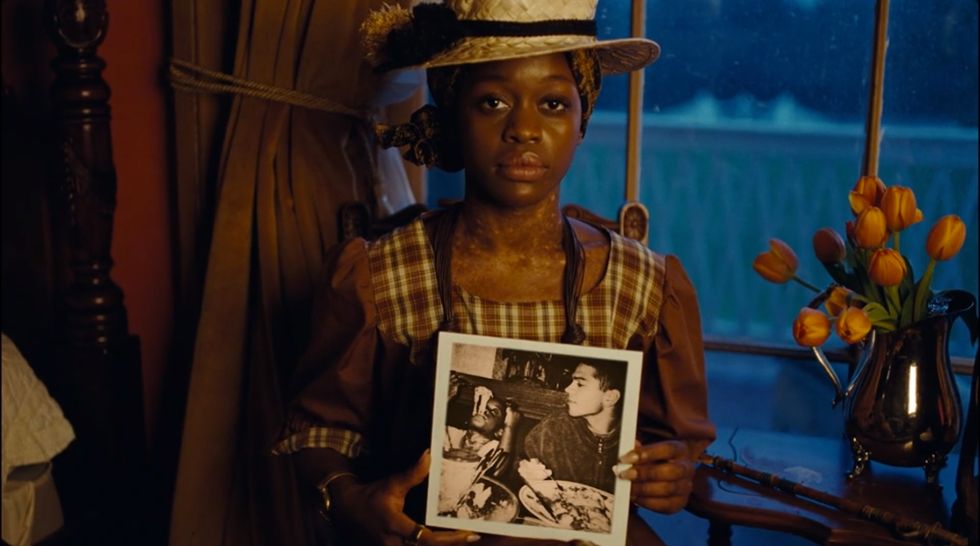 In the “Hope” sequence of Beyoncé’s new visual album, Lemonade, a ballerina takes the stage as Beyoncé sings the words to “Freedom.”

The dancer in a white dress and headpiece is 21-year-old Sierra Leonean-born ballet star Michaela DePrince.

In an interview with The Wall Street Journal, DePrince admits she thought it was a joke when she found out Beyoncé wanted to cast her in the video. At the time, DePrince was living in Amsterdam, where she performs as a member of the Dutch National Ballet. It wasn’t long before she was on a plane to New Orleans. Shooting for the scene took place over the course of two days in December. According to the WSJ article, the dancer choreographed her own moves.

“She said I looked like I was a creature from another planet,” DePrince tells WSJ of her encounter with Beyoncé. “She walked up to me and said, ‘It’s such an honor to have you here.’ I was really cheesy and said, ‘The honor is mine.’ I was on cloud nine.”

Born Mabinty Bangura in Sierra Leone in 1995, DePrince lost both her parents during the country’s civil war. Her uncle left her in an orphanage when she was three. There, she was taunted and abused by the women who looked after her. She was called “devil child” due to a skin condition she was born with, vitiligo, that made her skin appear spotted.

As the story goes, it was at the orphanage that she first came across a photo of a ballet dancer on the cover of a magazine. DePrince was mesmerized. "It represented freedom, it represented hope, it represented trying to live a little longer," she told CNN in a 2012 interview. "I was so upset in the orphanage, I have no idea how I got through it but seeing that, it completely saved me."

At four, DePrince and her closest friend were adapted by an American couple from Cherry Hill, New Jersey. The family encouraged her to pursue her passion for ballet from a young age.

In 2011, DePrince starred in the ballet documentary First Position, which follows six young dancers as they compete for the prestigious Youth American Grand Prix in New York City.

From then onward DePrince’s list of accomplishments is long.

In 2012 she graduated from the American Ballet Theatre Jacqueline Kennedy Onassis School in New York City, and in July of that year she made her professional stage debut as a guest principal in the South African Ballet Theatre’s production of Le Corsaire at the Joburg Ballet.

At 18 she was the youngest member of the Dance Theatre of Harlem.

Since 2013 she’s been with the Dutch National Ballet.

Along with her adoptive mother, Elaine DePrince, the dancer co-authored the 2014 memoir, Taking Flight: From War Orphan to Star Ballerina. “It was a therapeutic outlet and a way for me to reach out to other people,” DePrince told The Guardian of why she wrote the book. “When I went to South Africa, I shared my story with a few high-school kids and realised it could really have an impact. It inspired me to think differently about myself – I always wanted to be a role model and to let people know that it’s OK to dream and to live for something.”

DePrince’s memoir is currently being adapted into a feature-length movie.