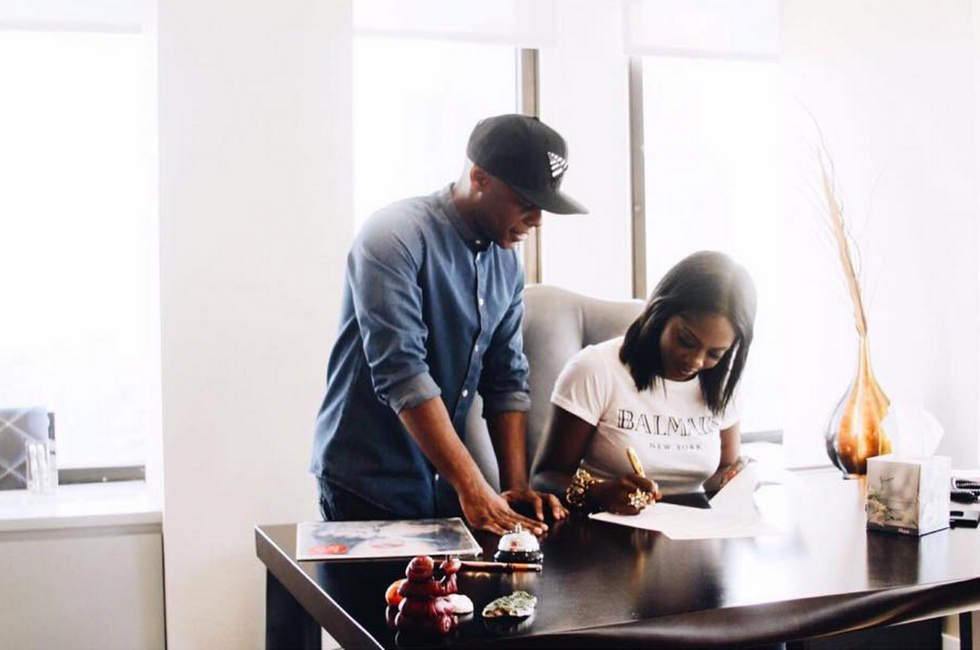 New Roc Nation signee Tiwa Savage had her debut on Apple Beats 1 Radio hosted by NYC radio station Hot 97’s Ebro Wednesday. On the show, the Nigerian star corrected Ebro when he called her the “most popular artist on the continent of Africa.” “Most popular female,” she quips. “This sounds like I’m cocky.”

“I love the fact that they are not trying to change me,” Tiwa Savage adds, referring to Roc Nation.

But, woah not so fast.

After the sultry singer threw up the infamous diamond sign to rep her new label at the concert, her fans, well the ones who are conspiracy theorists, are suspecting that she may have signed a deal with the devil. The notorious gesture that Jay Z, Beyoncé and other Roc Nation artists like Rihanna have been seen making has long been suspected of being a symbol pledging allegiance to the Illuminati, you know, the Bavarian cult comprised of the global elite believed to control the media, music industry and Hollywood with the goal of brainwashing the masses and ushering in a totalitarian police state, known as the New World Order.

Their fears worsened after the ex-Mavin Records first lady posted this trailer to promote her Red Tour in the U.S. on Sunday, which features footage from the One Africa concert including coaxial triangles, also a symbol linked to the Illuminati, and the moment that has fans floored.

Some took to Twitter and the rising star’s IG comments to voice their deep disappointment, which consequently has led to the footage going viral.

And singer-turned-pastor Felix Aigbe Libarty has offered his unsolicited opinion, suggesting the real reason Tiwa Savage has been estranged from her husband Tunji Balogun aka "TeeBillz" since April is because of a “spiritual attack”—a reference to the Illuminati?