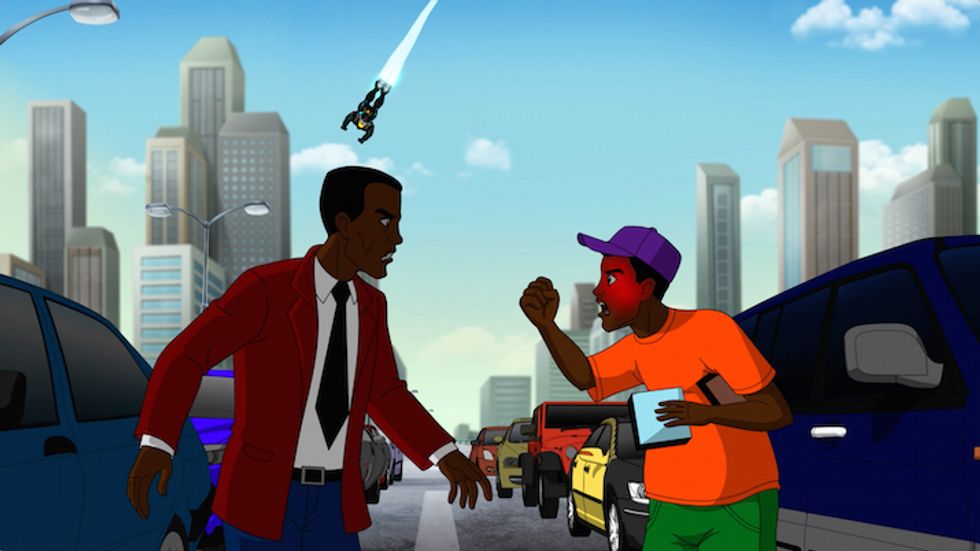 Roye Okupe shares a test pilot clip for an animated version of his Nigerian superhero comic series 'E.X.O.: The Legend of Wale Williams.'

The brainchild of Nigerian-born writer and digital animator Roye Okupe, the 136-page graphic novel series E.X.O.: The Legend of Wale Williams follows the journey of a young Nigerian superhero in a futuristic 2025 Nigeria. As the story goes, Wale Williams inherits a Nanosuit that grants him superhuman abilities after his engineer/inventor father mysteriously goes missing. Tricked into returning home to the fictionalized Lagoon City (modeled after Lagos Island) following a five year absence, Williams sets out to investigate his father's disappearance. In the process of understanding his suit's powers, he realizes he must restore hope to Lagoon City by preventing attacks from the leader of an extremist group known as The CREED.

"My mission with EXO: The Legend of Wale Williams is to put Africa on the map when it comes to telling superhero stories, be it animated or through superhero comics and graphic novels," Okupe told us about his inspiration for the project earlier this year.

Last month, Okupe and his Maryland-based YouNeek Studios released the first installment in the series, which he hopes to eventually produce a full animated feature for. This week, he's decided to share part one in a three-part series of test pilot clips for an animated E.X.O. series.

"Back in March 2012, I along with my team created an 8 minute test animated pilot we wanted to use to shop our idea for an animated series to TV networks as well as distributors," Okupe said an email to Okayafrica. "Up until now we haven't released more than 1 minute of animation which we compiled as a trailer. But now that the E.X.O. books have launched we have decided to release this to our fans. The animation does not exactly follow the story of the book because it was more or less done as a test/sizzle reel."

Okupe tells us that in this particular scenario he wanted to highlight Nigeria's iconic Third Mainland Bridge, the longest of the three bridges connecting Lagos Island to mainland Lagos. "Like any other popular route of transportation, the Third Mainland Bridge is notorious for traffic," he explained. "I wanted to play on the frustration of the driver (in the red jacket) and how he tries to distract himself from a long day on the bridge trying to get to work. He proceeds to hail a CD hawker to buy some music to listen to and it all goes wrong from there." He added, "I wanted people who regularly drive on the bridge to see the animation and immediately recognize it." Okupe also says he was hoping to show a lighter side of the project. "So far most of what people have seen when it comes to E.X.O. is awesome action and great story-telling," he says.

Look out for the second and third parts of the test pilot series to drop in November and December. E.X.O.: The Legend of Wale Williams Part 1 is available via Amazon Kindle, Apple iBooks or directly from YouNeek Studios. Chapter 1 is available to read for free here.

Update November 4, 2015: Roye Okupe's E.X.O.: The Legend of Wale Williams was recently nominated for best animated short at the Africa International Film Festival (AFRIFF), taking place November 8-15 in Lagos. To celebrate, YouNeek Studios has shared part two of the three-part test animation pilot series. In the clip, EXO tries to save a woman in a taxi from an attack by the "DRED" robots. Watch below.