Police Brutality and the Conditions of Black Citizenship 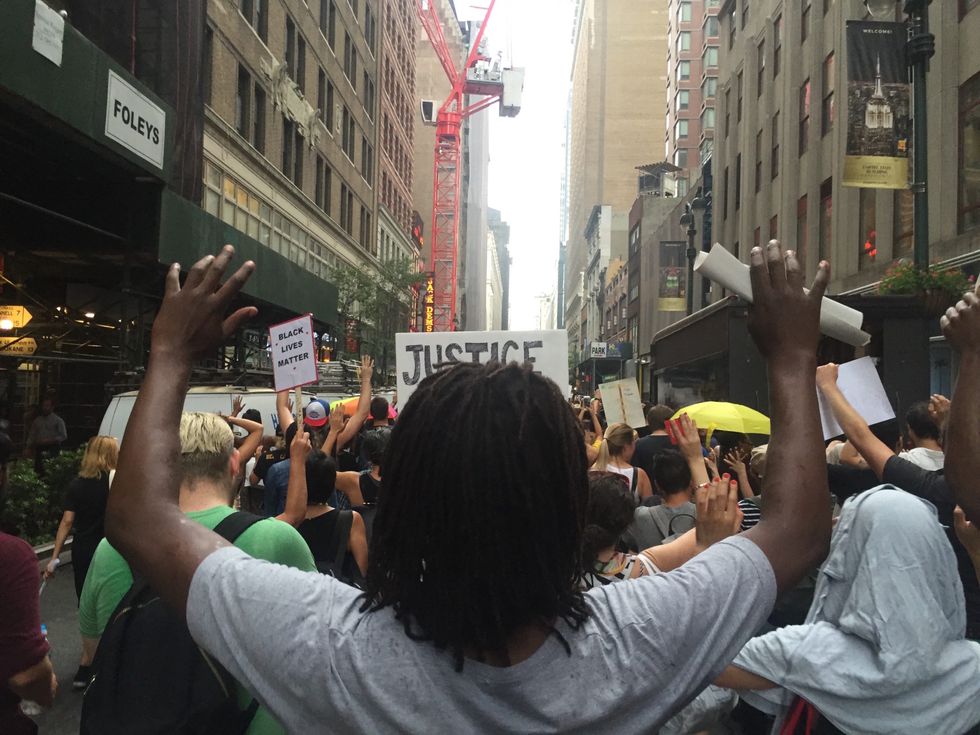 A first-generation American pens her thoughts on the how blackness limits access to full citizenship in America.

On Tuesday, Alton Sterling, a 37-year-old black man and father of five, was killed in Baton Rouge, Louisiana —the same state that recently passed a “Blue Lives Matter” bill. On Wednesday, Philando Castile, a 31-year-old black man, was shot and killed in his vehicle in Falcon Heights, Minnesota.

Cellphone footage allowed the whole world to witness these murders within 24 hours of each other. Social media has provided a platform for mourning. The unfortunate truth is that in a few weeks this footage will get lost in our newsfeeds, we’ll wait for indictments that may never come, and we’ll wake up to another video of yet another black life taken by the police state.

Throughout this process the media will debate if their lives were worth anything at all. Reports about troubled pasts, criminal records and imperfect social media accounts will haunt the grieving. I’m never surprised by this cycle but I’m always enraged by how comfortably America justifies the murder of innocent black citizens.

As a first-generation American, I am constantly told how fortunate I am to be here. Like the children of many African immigrants, I was raised to believe that if I worked hard enough to make my parents proud I would be exempt from the painful parts of blackness in America. I invested in post-racial rhetoric as a means to further my own attainment of the American dream. What I quickly learned is that regardless of my place within the African diaspora, in many ways, blackness limits access to full citizenship.

Between the civil rights movement and our first black president, people began to believe that the black community, especially young black people, had nothing left to protest. Everyday racism is seen as mundane. Rioting is seen as an uncivilized act and not an articulation of racial and economic oppression. Marching has become the occupation of irresponsible black Millennials and not the responsibility of active participants in a democracy.

Photo taken at the Union Square protest on 7/7/16 by Okayafrica.

For too long, black life after black life has struggled against a system that is determined to do us harm. What Alton Sterling and Philando Castile’s deaths teach us, what Rekia Boyd, Mike Brown, Freddie Gray, Tamir Rice, Sandra Bland, and Eric Garner’s deaths should have taught us, is that citizenship in this county is not a shield. Your right to bear arms will not protect you from public execution by police. Your youth will not protect you. The American dream will not protect you. And as soon as you speak out of turn, exercising your First Amendment right could take your life.

What’s taking place in America is not police misconduct. We are witnessing the reinvention of a longtime tradition. Social media's curation of bloodied black bodies is no different than the postcards of public lynchings distributed around the antebellum South. These postcards served as a confirmation of white supremacist power and eased concerns around public safety. They also sent a powerful message to black folks to stay in our place.

The myth of white public safety always relied on the violent deaths of black folks and that hasn't changed in the 21st century. iPhones have replaced public audiences. More often than not, black citizens are burdened with capturing the murder of other black citizens. This evidence is not for black folks—without the video we are well aware of the violence enacted by the police state. There are not enough convictions for me to believe that this evidence serves as anything but a continuation of a longtime tradition in America. We must call out racism when we see it.

We must call lynching by its name.

This is not a post-racial society. Now more than ever it is important for members from all corners of the African diaspora in America to recognize this history. There is no safe space in a country that is complicit in killing its innocent citizens. We must begin to ask ourselves the questions that many black Americans have confronted for generations.

How long will white silence and white comfort pull the trigger on black America?  How long will media corporations make a spectacle of our lives? How long will “good cops” cosign murder by corrupt officers?

My parents taught me to believe that I live in the greatest country in the world—I carry the weight of this everyday. But like my elders, I refuse to accept this version of America. As long as terror continues to follow our people, we all have something to fight for. The struggle, for all of us, continues.