Progress and Prosperity in Botswana...Without Women 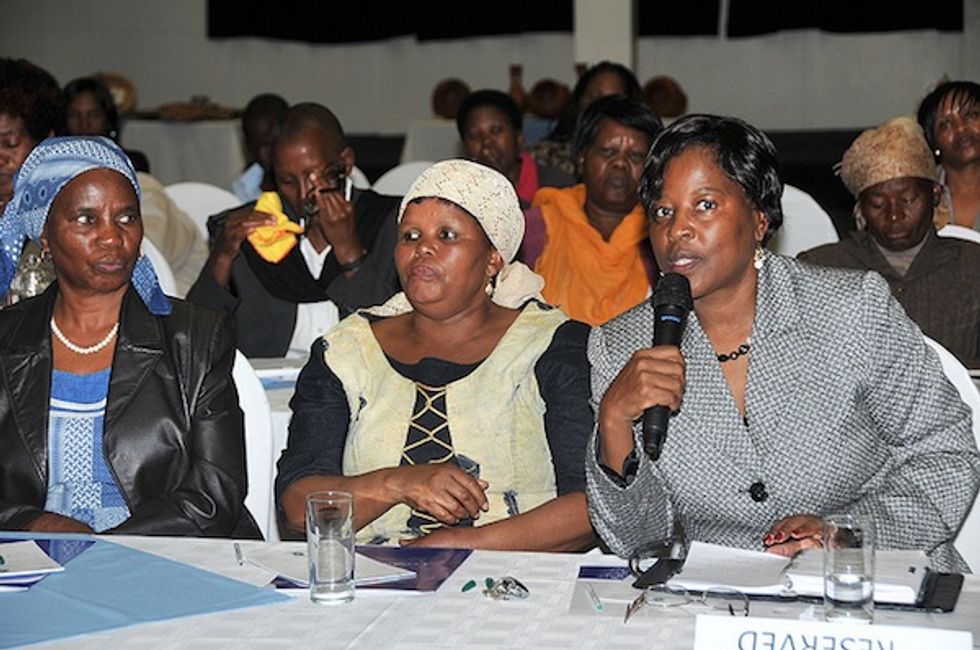 Recently named Africa's least corrupt nation, Botswana's progress and prosperity only paints half of the picture.

Botswana is often characterized as an anomaly to the rest of sub-Saharan Africa, exemplified by its good governance and booming economy. The nation has achieved stable and rapid growth since independence in 1966, mostly through supportive relationships between an open market economy and a system of elite democracy, successfully blending 'traditional' and modern elements, and offering a range of fairly free and meaningful political choices.  In other words, if you ever happen to take a business/economics class about opportunities in Africa, we'd be surprised if you didn't hear the professor say "Look to Botswana" yes, over the horizon there.

This week headlines again are applauding the nation for achieving the title as "Africa's Least Corrupt Nation." The annual report by Transparency International indicates that Botswana ranks 32 on the globe, highlighting their "success story." These accounts are also cognizant of Botswana's war against HIV/AIDs with the second highest rate in the world. Estimated adult HIV prevalence among 15-49 year olds is 24.8% with young women contracting the disease at much higher rates than men. But the government has made HIV/AIDS prevention and treatment a priority, and is the first African nation to provide free treatment to citizens living with HIV/AIDS.

What might be the problem then? While Transparency International's report hones in on corruption, perhaps we need to be more critical of what we define as an "African model." In their article for the Huffington Post, Nake M. Kamrany and Jennifer Gray describe Botswana as a model for progress and prosperity on the basis of GDP per capita ($16,100), stable population growth rates, an expanding economy, and en effective health agenda against high rates of HIV/AIDS. These facts are all worthy of praise, but it becomes somewhat of a concern in milieu of the decade of African women, when the model for Africa has women represented with only 6.6% of the seats in parliament and only 19% of the position in local government.

Corruption seems to be the talk of the town whenever it comes to leadership throughout the continent. Similar to the controversy surrounding the Mo Ibrahim Prize for Good Governance, governance seems to always place African leaders (typically men) at the forefront of the conversation. In some ways, focusing on corruption and how simultaneously problematic and exciting it is, undermines our ability to see how corruption and governance are implicated in other aspects of leadership and democracy. These aspects specifically being gender and women's political representation. We're not holding African countries to higher standards either, the United States has had an issue with female political participation as well and is still below 20% in Congress. However, the goal for African countries should not simply be: good economy, good governance, no corruption. Women's rights, LGBTQI rights, and political participation have to be worked in and through those aspirations.

In the case of Botswana, NGOs in Southern Africa such as Open Society Initiative have considered these questions and suggested that Botswana's government is "not genuinely committed to promoting and protecting the rights of half the population." A concern throughout southern Africa is Botswana's failure to ratify the SADC gender protocol (Southern African Development Community), which underscores the significance of women's rights and political participation. We're not throwing shade at Botswana's achievement, but we need to change the conversation so that the model we have in mind isn't imported by certain Western models of modernization and capitalism, and most significantly that it necessarily includes and represents women as leaders, politicians, and perhaps the very thing we keep referring to as progress.