Sabina Ddumba Is the Ugandan-Swedish Pop Star That Music Needs 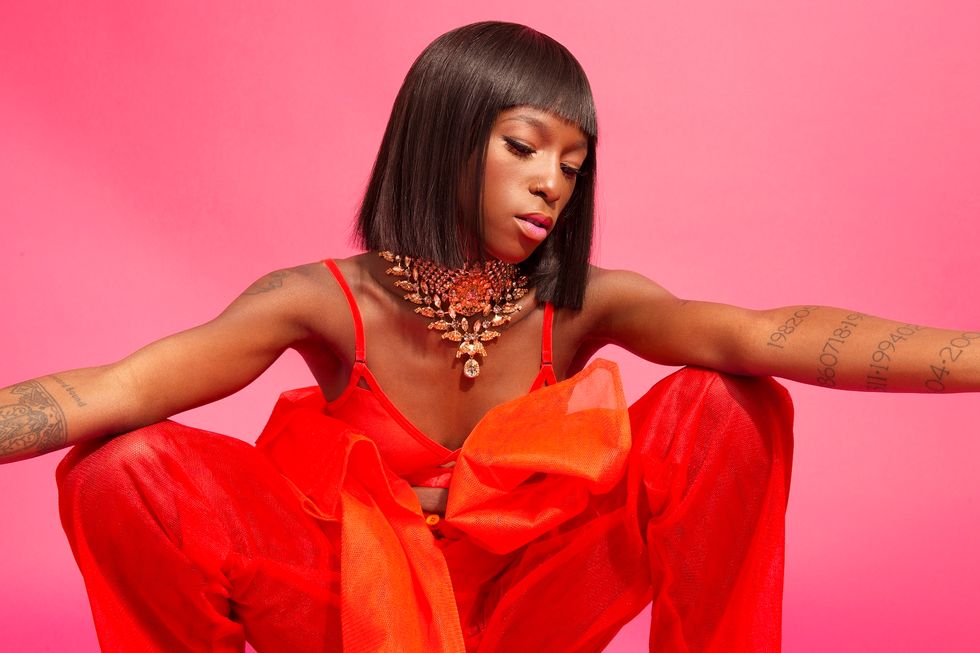 We speak with the artist about her massive single "Blow My Mind," the Ugandan influences in her music, and her love for the TRL-era pop of the late '90s.

"I'm on my way to a party," says the Ugandan-Swedish singer Sabina Ddumba as we begin our phone conversation. It's exactly what I'd imagine a young pop star would be doing on a Thursday evening. I picture her sifting through a wardrobe of fashionable, color coordinated clothes to pick out just the right outfit, and applying copious amounts of lip gloss in the mirror, like a scene from a late 90s teen drama.

Ddumba is no shallow teenager though. At 25, she's had years of career-shaping experiences in the music industry, including providing backing vocals for the likes of Katy Perry, performing at Uganda's National Theater, winning a Swedish Grammy for Best Newcomer in 2015, and having two of her singles "Effortless" and "Not Too Young" from her debut albumHomeward Bound, certified platinum in Sweden.

Born in Stockholm to Ugandan parents (her father fled the country under Idi Amin's regime), the artist is now looking to make her music fully global—without leaving behind her specific Ugandan and Swedish cultural touch. She collaborated with Nigerian artist Mr Eazi on her latest single "Blow My Mind," a quintessential pop ballad reminiscent of the sugary, mainstream hits of the TRL-dominated early aughts—and further proof that the sounds produced by African artists can have undeniable global appeal. For "Blow My Mind," she channeled the "warmth" of her home country, while also managing to make the song sound nostalgic and familiar.

She grew up emulating megastars like Britney Spears and Beyoncé, and in their footsteps, the artist has gravitated towards crafting grand hits complete with lively performances and music videos, with the "fan blowing" and everything, as she puts it. With her distinctly Ugandan touch, however, she offers something virtually unheard of in fully mainstream popular music. Her cross-genre, cross-cultural sound—which feels universal, yet rooted in the rhythms of the continent—deserves the type of billboard chart-level recognition given to pop songs made in the US. With Ddumba's growing presence in the music industry, young African girls have the pop idol that they deserve, one that looks like them who they can watch and imitate the same way Ddumba watched the stars of her childhood.

We caught up with the singer to discuss her latest single, her first time performing in Uganda, collaborating with artists from the continent and her bubblegum pop influences.

Can you tell us about your journey up to this point? What got you started in music?

I grew up in a big family home going to church. My Dad was a pastor, and I also went to a Christian school. Once a week we had just morning praise and I used to sing in the school choir and at church, since I was six. When I was 14, we changed gospel choirs and I started singing with the Tensta gospel choir. When I started there, I began arranging backing vocals, and I just got to see how many different ways you can work with music with.

People were telling me "it's fun that you want to sing, but don't get your hopes up, because you'll never be able to live on that." I started doing backing vocals for a woman named Jenna Wilson when I was 15, and went on my first tour then. That's when I realized that what I wanted to do was possible, and that you don't have to be the biggest star to be able to work solely in music.

[From there] I just started taking a lot of backing vocal jobs and got to know a lot of people in the Swedish industry. Sweden is a small country so I guess I just met the right people. One day I was sitting in a meeting at Warner—I can't even remember how I got there—but I was there and I got signed. That was seven years ago.

How does being both Ugandan and Sweden influences your music? Are there different elements that both aspects of your identity bring to your music?

The environment I've been around, there's been a lot of pop. But at home we only listened to African music, Ugandan music, Congolese, Nigerian and gospel or urban. So, it was just a mashup of everything. A fusion, because I can listen to my songs, and it seems like I've gone every direction I can go. But, it's deliberate—like a thread through it all.

What's been your most exciting career moment thus far?

It was when I got to play in Uganda because that has been something that I've wanted to do, but I've never talked about it. I always wondered how I was going to do it. Then, I got this request from an organization called Salame, who work with Swedish artists, and they had a festival in Ethiopia. I went to Ethiopia and Uganda and [I got to sing at] the National Theater of Uganda, which was a place my dad went when he was young and he started the theater and had this theater group. [The National Theater] was actually the beginning of his journey to Sweden.

Wow, so it was a full circle moment?

I was like "okay, I'm standing at this place where my father met this group of people." They got together, and made a theater group. It was during the time when Idi Amin was in charge, and one of his men saw this show and wanted them dead because they said that they were spreading propaganda. They were putting pictures of them all over, saying "we want their heads." For me to be able to go back there and sing at that place where it all started for [my father] is one of my biggest moments. Also because I didn't bring myself there, somebody else brought me there—it just felt like it was a coincidence that I was there.

Also, having a lot of my family there, like my grandma, who has never seen me sing. She was sitting there, She didn't understand anything that I said, but just having watching me was empowering.

Your single 'Blow My Mind" is having a moment. How did that collaboration come about with Mr Eazi and what has been your reaction to the response that has gotten so far?

The thought of putting someone else on this song was kind of weird to me at first, because I care about the vibe. [I was like] will they understand? What if they change it? But, I went to Nigeria and I met a lot of people, including Spellz, who is a producer and an amazing musician who works with Mr Eazi a lot. My manager was like "what do you think of Mr Eazi," and I said yes. I didn't want to get my hopes up because I didn't know if it would actually happen. I didn't want to get disappointed, so I told myself "sure, let's see." Then they sent the version [with him] to me and I was "okay, fuck. This is exactly what it needed for the song to feel like home." Because, when I wrote the song, I got a strong feeling of the warmth of Uganda and the warmth of Africa and he really brought that out even more.

I couldn't do anything else but say thank you. The song had been around for a year-and-a-half before it got released. I've performed it three times and the reaction has been really, really fun. My siblings and my cousins love the song and that means a lot. It's been amazing. I don't really think I get it, but the little things I do get is amazing.

People tend to think of "African music" as this one thing. But, Uganda and Nigeria, for example, both have really different musical histories. What does having that sort of cross-continent collaboration add to the sound?

It adds heart to the sound. It adds soul to the sound. I've gotten the chance to work with people who are really talented. I went to Nigeria and I just walked around in Lagos and I was like, "Oh my God, the vibe and the energy here is amazing." Having that around and creating from that, it's like walking around with $1000 in your pocket. Just the feeling of it. It's a whole other vibe, and it isn't just about making music for money, it's making music because you have to.

Are there any other art African artists that you're interested in working with?

Oh my God, Burna Boy. But, there are a lot actually, I have an older brother who is 12 years older than me and he knows a lot about the Ugandan music industry. I actually don't though. He's the one letting me know who's hot right now, and what songs to listen to so I always go through [his recommendations]. It was so amazing going to Uganda and just meeting people who sing because I never meet Ugandan musicians here in Sweden.

There's so many amazing talented people though. I find new songs every day. I came back from Nigeria two-and-a-half weeks ago and I don't know how many times I "Shazam'd" and was like "what song is this? There's this 'melody language"—I don't even know what they're saying in some songs, but I understand everything.

You see people in the club, singing "Dangote, Dangote," and they don't even know who that is. You see people singing "soco, soco, soco"—all of that. They have no idea of what it is, but it's speaks to them anyway, so they just sing along.

Did you grow up listening to the pop icons, the Christina Aguilera's, Britney Spears, Destiny's Child? Your sound and image reminds me a lot of the pop golden-era of the late 90s.

Yes, I love Britney. I'm not going to lie, I love Britney, Destiny's Child, TLC, Christina Aguilera, Christina Milian, you know all of them. There were those games you play in school like "okay, we're Destiny's Child or we're TLC and we're on a tour" that was our game. The video to "Blow My Mind" really takes me back to that because that's what I was thinking when I wanted to do the video. I was reminiscing about when I was a kid, coming home from school and just sitting wanting to do my homework but I couldn't because there were so many amazing music videos [on TV] that I'd just stand there trying to copy them and do the exact same dance moves. I was like "I want to do that when I grow up." I wanted to be the whole package: have a fan blowing, with a lot of dancers, wearing a catsuit like Beyoncé, with hair to the floor.

What is next in your musical journey?

I am actually taking some time off this summer. I've been busy on tour here in Sweden for the last three years, so I'm not on tour this summer, which feels really weird. I don't really know how to live—I'm kidding.

I'm sort of rolling my thumbs. I'm like, "okay, what am I going to do today?" But, I'm releasing going to be releasing a single sometime in August and then an EP—and hopefully I will get to play this music all over the globe.