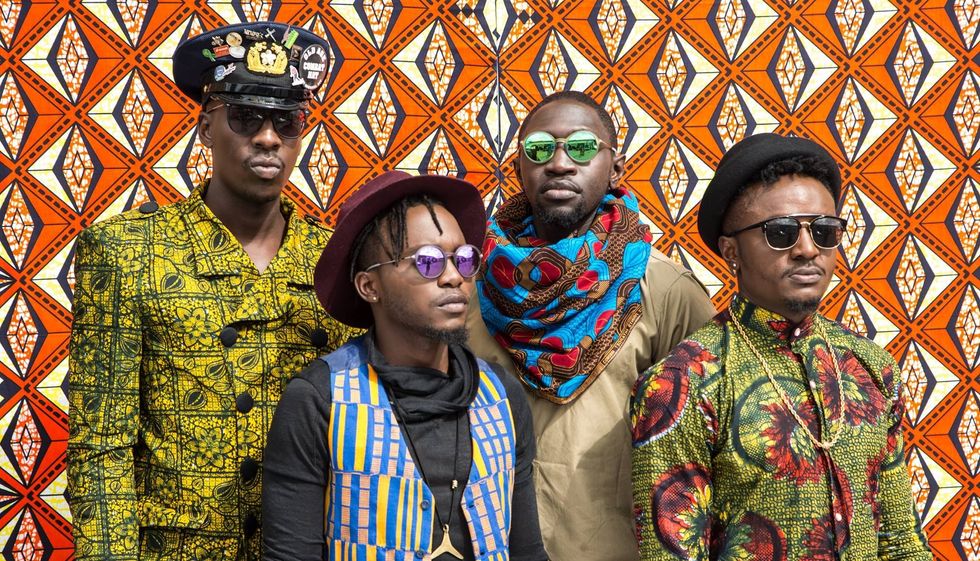 We sit down with East Africa's biggest band Sauti Sol to talk about their rise, the new hits and the controversies along the way.

Sauti Sol have been on a hot streak since the release of their latest album 'Live and Die in Afrika.'

The Kenyan four-piece outfit, who just won Best Group at the MTV Africa Music Awards, will be bringing their afro-pop sounds stateside this month, featuring a headlining concert at New York City's Highline Ballroom on October 30.

Ahead of that show, we sat down with East Africa's biggest band—comprised of singers Bien-Aime Baraza, Willis Austin Chimano, Savara Mudigi, and guitarist Polycarp Otieno—to talk about their rise, the new hits and the controversies along the way.

For more from the group, check out The 10 Best Sauti Sol Songs.

Live and Die in Afrika was one of our favorite albums from last year. What’s the best way for artists live and work successfully in Africa?

There’s no better way, if you dream, believe and work hard enough to be the best in your craft, every way is the best. Africa is the future and the world is now warming up and very receptive to African sounds. It’s up to us to sell our authentic African art to the rest of the world.

If you had to describe Sauti Sol’s music in 3 words, what would they be?

Your latest video for “Kuliko Jana” has been going viral. Can you tell us how the video came to life? How did it feel to shoot a video with your old high school’s choir?

The original song featuring Aaron Rimbui was released in November of 2015. The song had been on heavy rotation on the radio for months and we were even ready to shoot the music video with Aaron.

We have a CSR called SOMA SOMA Initiative that’s set up to champion for service learning and leadership through creative arts. So on this day we had gone back to our former high school as a home coming.

We had a good talk and when we were just about to leave, the kids requested that we sing to them. We happened to sing “Kuliko Jana” randomly and they all joined in singing word for word.

The video went viral after just 24 hours of upload on our Facebook page attaining 1 million views. After that, it was clear, based on how overwhelming the support for the a capella version was, we had to get into the studio with Upper Hill School’s choir (Redfourth Chorus) to re-record the song in an a capella version.

We shot the video two days later and the final music video shot by Kenyan creative directors (Tim & Joash) was exceptional. The kids have become overnight celebrities in Kenya and one of the most sought after by the media for interviews.

"Africa is the future and the world is now warming up and very receptive to African sounds. It’s up to us to sell our authentic African art to the rest of the world."
You just completed a major Kenyan tour, playing 6 big cities with a full production. How would you describe the current state of music and the music industry in Kenya?

You have become the change you want to see! Our mantra has always been to lead the way. It all started when we were getting mediocre services from local music producers who didn’t take us seriously or took their time to understand our art and sound.

So we picked up production and Live and Die in Afrika was self-produced by us. Polycarp ‘’Fancy Fingers’’ Otieno and Savara Mudigi produced the entire album.

The success of the album lead us to start thinking of giving our fans a top notch and fully produced show by international standards. Our efforts have elevated the standards in the industry as we’ve come so many awards and received international recognition.

The tour was put together by Sauti Sol Entertainment’s in house team and created employment for up to 200 people on a contract basis for the entire duration. It is really expensive to produce a tour and cater for the logistics around it. The other big challenge we experienced was uncertain weather patterns as well as our super fans getting locked out because the concerts were 18 years and over.

Sauti Sol’s major fan base is between 13- 27 and during the tour we could only admit 18 years onwards hence majority of our fans missed out on the experience we intended for them.

It’s been awhile since this happened, but can you tell us about your experience dancing with President Obama to “Sura Yako”? How would he do in a Lipala dance competition?

[Laughs] My n**ga Obeezy is a natural. He would take down anyone who challenges him to a Lipala dance off. We were shocked at our fast he was able to learn and master the moves without prior rehearsals…Unless he’s been watching our music video incognito [laughs].

You guys are one of the acts with the most nominations at the upcoming MTV Africa Music Awards. Which category do you want to win the most?

Yes, we’re the second most nominated acts after Wizkid and AKA. We really want to win the Best Group because it’s been a long time coming. Last year we lost narrowly to P-Square so this year there’s no doubt we’ll bring the award home. [Sauti Sol ended up winning the Best Group award over the weekend.]

One of those MAMAs nominations is for “Unconditionally Bae,” your collaboration with Tanzania’s Alikiba. What are some of your dream collaborations, with African or Western artists?

Right now we just can’t wait to work with StarBoy Wizzy (Wizkid) but our dream collabo would be Beyoncé or John Legend.

Your music video for “Nishike,” one of the first singles from Live and Die in Afrika, was banned from many Kenyan stations for its “steamy content” back when it was released. How do you feel about uproar after these years? Do you think that video would still be banned in Kenya if it came out today?

Yes it would still be banned. It just goes to show you the double standards set by communication authorities. If you can let “Anaconda” by Nicki Minaj play on Kenyan TV or Trey Songz' “Oh Nana,” but the moment they see sexy Kenyan men going shirtless in a video it causes a moral uproar…

We're artists and our music is the one tool we can use to express ourselves. So yeah, we knew it was going to get banned and they did, which really worked in our favor. We've always pushed boundaries with our music and we're not about to stop any time soon. In this digital age, all they do when they ban your content on TV is push more traffic to your Youtube channel. If only they'd be banning our videos more often, we'd be having millions of views in a day.

After a successful USA Tour last year on the road to BET awards, this year's goal is to solidify on our international act and push our #LiveandDieinAfrika album while putting African music on the global map.

We are true African men. We'll probably sneak in some maize flour to go make our own ugali in the States but Polycarp “Fancy Fingers” loves Mexican food so he'll be delighted with that.

Seattle has the biggest Kenyan crowd compared to the rest of the cities in the tour schedule but we're not only targeting Kenyans in the States. We have a wide range of audience that include music lovers, African music enthusiasts to other African nationalities.