Senegal and the Cruelty of the Fair Play Rule 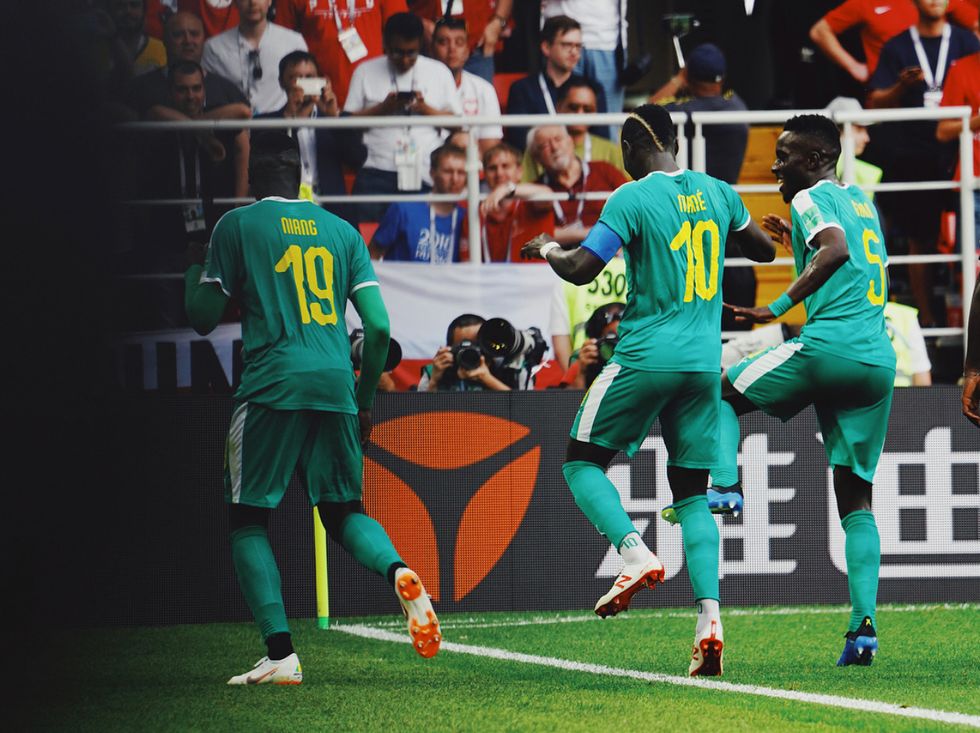 he Lions of Teranga's dance celebration. Photo: Kicks to the Pitch.

Op-Ed: For African teams, the Fair Play Rule isn't fair at all.

So, Senegal has been kicked out of the World Cup, and rather cruelly as well.

As a man with loosened tie nursing his 14th warm Tusker beer in a Nairobi bar exclaimed during the game, 'Oh damn, what a bummer' to anyone who would listen. It was yet another delightful gut punch in the storied and questionable history of African World Cup teams. Ask any Algerian about 1982 some time, chances are they'll mutter with deep seeded bitterness and it'd be a wise call to end that conversation (quickly).

Grand conspiracies in the world of sport are dime a dozen and typically debunked with a quick kick down onto the ash heap of history. Such is not the point, but once again, we find ourselves in a World Cup year, and as seemingly always happens, controversy has poked its head squarely into the mix by landing afoul of African squads vying for second round qualifications and Senegal has born the brunt.

As such, I'm actively forming an aluminum foil hat; there was a myriad of strange and inexplicable bullshit cutting against African squads in the 2018 group stage, there are some things that deserve to be harshly addressed.

A fan holds a Sadio Mané jersey. Photo: Kicks to the Pitch.

Yesterday is just another rung on the ladder headed towards bottom for FIFA; the guise of which has been hidden under something called the 'fair play' rule. What is that generic sounding rule that sounds like some sort of totalitarian Olympic regulation of the 2034 Winter Olympics? Essentially it boils down to this: the team's with the fewer yellow and red cards benefit, the teams with more are penalized; regardless of points.

This seems to play into a larger and uglier issue from earlier in the Group Stage for Senegal when Aliou Cisse, the manager for Senegal was asked as to the 'physical nature' of the play from the Senegal squad preceding their match with Japan; Cisse responded "The physical quality of Senegal versus the technical quality of Japan… I won't describe it that way. They know how to put pressure on the ball so you have to be strong. We also have individuals with higher-than-average technical abilities, and we'll prove it."

On the subject of the awkward implications regarding Senegal's style, let's get the big and obvious elephant in the room addressed right off the bat: the Senegalese side didn't deserve to go home last night. This isn't the fault of Japan, who bested them for second place in Group H (despite some terminally desperate avoidance to touch Polish players for the last 30 minutes of their game last night).

Senegal simply had more yellow cards; six little arbitrary pieces of yellow paper in the group stage to Japan's four. The key word, of course is arbitrary. What are the regulations for a yellow? What parameters fall therein? Is there an exacting standard for levels of contact? Does it have something to do with ugly perceptions of physicality? To this observer, much of the yellow card fever pitch that struck this cup's proceedings seemed to be vengeful whims, apologetic turns and to the undefined preferences of different refs.

Some were clear cut cases; others were mired down in shades of grey; as is always the case with football, especially the World Cup. No, the Video Assistant Referee (VAR) implemented for 2018 hasn't helped the cause, and trust, we'll be getting to that just now.

Kalidou Koulibaly during the game vs Poland. Photo: Kicks to the Pitch.

While fighting off the effects of a late night that was wracked with disappointment and disillusionment at the international sporting process, let's address the cards. African teams didn't have the most cards, but they didn't have the least either (that distinction of being least is a three-way tie with one a piece for Spain, Saudi Arabia and Uruguay).

I'm not quite to that point of conspiratorial web-spinning to lie about numbers of lemon and scarlet poster board squares being flung about, but I will note one thing: five out of the eight teams who benefitted the most from this so-called 'Fair Play' rule could be considered favorites to win the World Cup. In order of least to most cards received that's Spain, England, Germany, Brazil and France.

Then again, I wouldn't dare cast mistrust in the direction of FIFA, an organization of unquestioned moral repute and upstanding conviction. They've certainly never been accused of bribery, extortion or allowing migrants (including Kenyans) to be worked to death building massive dubious stadiums in Dubai. Such would be gauche, and most FIFA officials would tell you as much.

Captain Sadio Mané after a game. Photo: Kicks to the Pitch.

Not quite dirty and not quite clean

So let's get back to some shadowy places. Senegal was the more obvious victim, but hardly from the only marginally mysterious call or non-call. One such came against Nigeria, who witnessed a ball clearly be drawn to the hand of an Argentine defender obviously two steps inside the box. Well hey, everyone is allowed one right? It's not like Argentina has a World Cup history of beneficial referee discretion of questionable handballs in crucial moments, just ask Maradona: he'll tell you as much.

Then there was that ugly weekend, the opening games a couple weeks back, when three African teams were defeated in late minutes, two via converted direct free kicks against Tunisia and Egypt. Then there was that gorgeous header for Morocco, square into the back of their own net in waning minutes of stoppage time.

All of these could be swept aside and dismissed, things happen, all the teams lost key matches (Egypt, Tunisia, Morocco or Nigeria) holding their own but eventually faced the specter of elimination.

Such is not the case for Senegal, who caught in a back and forth game and looked to be wearing down on Colombia for much of the first half. It was early within this first period that the most egregious of calls happened: a 50/50 play in Colombia's area that was heavily laden with contact. The incident was initially signaled to be a penalty, but was within moments reviewed and recalled. It raised some odd notions; that those Senegal players asked if they're too physical cannot be transgressed against with the same rough play.

Where I was, wedged between several tables with occupants at varying levels of being thoroughly toasted on buckets of beer and watered down cocktails, there was an audible gasp. An uneasiness sidled around the room; everyone has seen such strangeness before; and while a different scenario entirely, it felt like Ghana losing in 2010. Everything that followed just seemed tinged towards negative after that perky jog the ref took to the video booth to overturn his own judgment.

The question for me remains; if that had been Cristiano Ronaldo being hacked below the knee, would the call have been reversed? Judging by some of the whisker-thin touches he's drawn penalties from in Russia over the last few weeks, my suspicion is no.

M'Baye Niang celebrates his goal against Poland. Photo: Kicks to the Pitch.

There is always going to speculation of whether or not there are stereotypes being played out on the pitch of the World Cup, and whether perceptions of 'hard play,' 'being plucky,' 'physicality' and 'a general disorganization' that always dog after African squads every four years (typically stated by either a bland older English announcer or a generically-attractive American sportscaster in between spouting off meaningless stats).

On top of this have been some ugly reports coming out of Russia, of police checking into why Senegalese fans danced so much (after beating Poland), taunts thrown down from the crowds, Cisse having to reach to explain why his squad was being 'physical,' head-slapping headlines and offensive tweets from Western media houses and figures.

Certainly this occurred in the 2018 edition, but it didn't seem to be the principal transgression it may have been in past years. No, this time around it seemed to be a fundamental mishandling of football as the global game. It made all of that 'This Time for Africa' talk of South Africa in 2010 seem as though wrapped as some sort of meaningless corporate-driven drivel, meaningless and utterly contrite, a cute side note of appeasement.

Obviously, there is no real way to connect such dots, there isn't exactly a factual basis that FIFA doesn't 'want' African teams cracking through to a final, or that the body skews towards desiring 'bigger markets' making it farther. There's no way to estimate that they've miscalculated the balance of footballing fervor on the continent, it's just an uneasy feeling.

Last night came with a creeping sort of dread that only comes through in clarity driven realizations after several lukewarm beers. In the end, Senegal got screwed, I truly believe that and the heavy accusations of being overly 'physical' are, unfortunately, right at the heart of their elimination from potential World Cup glory.

In the end, the football will be watched around tables and in living rooms in Nairobi, Dakar, Lagos but the audience may be slightly more jaded following Senegal's unceremonious exit. In the grand scheme of the FIFA World Cup, it seems that opportunities are meant to be missed for African squads.