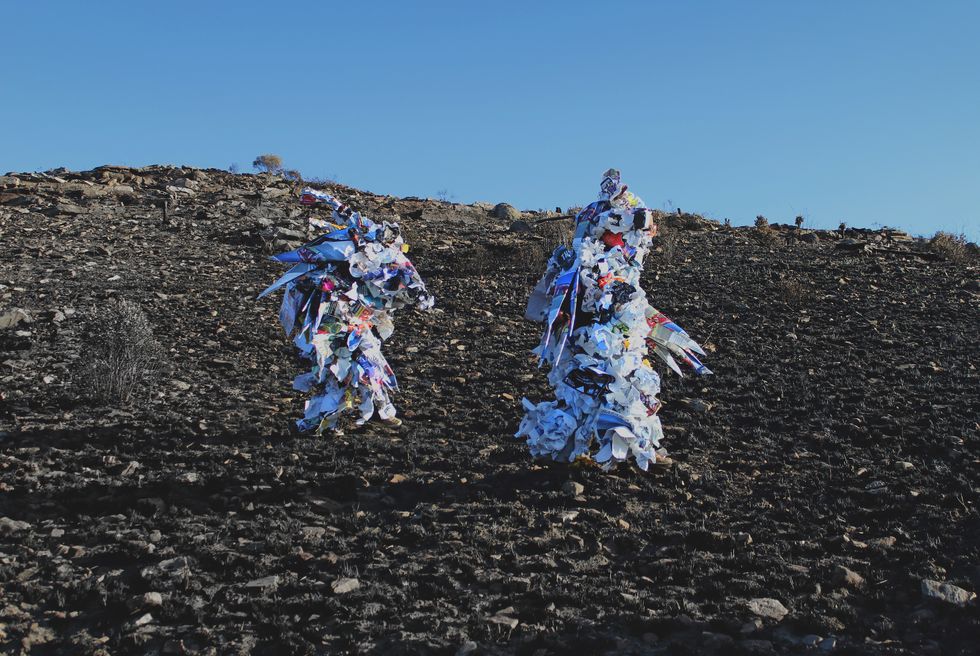 How the pantsula stilt walking Ten Day Men collective made South Africa's National Arts Festival take a look at itself.

At the end of June and bleeding into July each year the city of Grahamstown plays host to around 50 different arts venues and performance spaces — transforming the city for the better part of two weeks into an international art haven. This 11-day period is known as the National Arts Festival (NAF). The yearly festival, started in 1974, is South Africa’s largest and grandest arts festival.

A moving, breathing two-metre-tall giraffe parading around with a small, round, waddling counterpart was an unusual sight at this year’s festival. Upon seeing these anthropomorphized creatures, artists and festival-goers alike had no choice but to reflect on the festival and its intended purpose — like a petting zoo of consciousness.

The giraffes in question go by the name of the 10 Day Men, and they’re the only pantsula stilt walking collective in the country. Hailing from the Grahamstown township of Joza, they’re NAF veterans. This year though, their contributions were as thought-provoking as they were entertaining. Groupmembers Ayanda Nondlwana, Siyabonga Bawuti, Monwabisi Dondashe and Athenkosi Nyikilana teamed up with Grahamstown-raised, Cape Town-based performance artist, sculptor and filmmaker Francois Knoetze to make an interactive statement on the arts in their city.

Knoetze and the Ten Day Men crafted their elaborate and dynamic sculptures from recycled posters of NAF’s past. The pantsula dance troupe performed in the costumes, filmed it and made a provocative short film. Semi-Gloss, a commentary on what the NAF actually means to artists and the Grahamstown community, premiered at the festival.

The 10 Day Men, coincidentally, trace their roots to the 2012 NAF when the pantsula outfit Via Kasi Movers (formerly known as Grahamstown Pantsula) joined forces with the stilt walking crew, Phezulu, for a production called Tshini Kwedini! Their name is a jab at the posters that line the streets of Grahamstown each year in the period leading up to the festival and then suddenly are left forgotten, unappreciated until the next year's festival rolls around. The collective felt the same way about their art and their city––that it had a ten-day shelf life.

In addition to showing Semi-Gloss, a few of the 10 Day Men members participated in a pantsula-drama performance Nondlwana directed called Loxicon Story: Umavusana. “It’s about three friends trying to get out of the struggle but one of them ends up making the wrong choice,” says Nondlwana. The fact that they can perform a dramatic theatre piece with traditional pantsula elements while another work is critiquing that same festival is a novelty not lost on the director. Nondlwana appreciates what NAF offers and its impact. “NAF is a big event which brings people from all over the world. So in it we find an opportunity for people to see our work and we also learn other forms of art,” he says. “It gives you that feeling of performing on a professional level — which is a great thing for local artists.”

In order to understand the root of the NAF criticism, it’s important to look at the history of the city of Grahamstown. The festival itself is centred at the Settlers Monument — a national monument "celebrating" the achievements of British colonialists in the year 1820.

Indeed, the presence of the NAF in Grahamstown mirrors South Africa’s own dichotomous history and arts. "The social and infrastructural ills barring many artists from opportunities in South Africa are nowhere more glaring than in this deeply segregated city for these ten days," says Knoetze.

“We are not just wearing costumes. We are telling a story. A story about us Grahamstown artists,” Nondlwana tells me. “It’s about our struggling, being used but not supported throughout the year. The only time they know or take us seriously in our art is at festival time.”

I asked Nondlwana how audiences reacted to the film. He said they responded well because they weren’t previously aware of the struggles Grahamstown artists face. “Some white people don't like it because they say it’s disturbing their festival. For me, it’s those whites who cannot stand for the truth.”

What Nondlwana wants, and what the 10 Day Men are demanding, is a more genuine artistic environment in Grahamstown, one in which they feel their talent is valued and accessible for all. They’re using their art to expose the holes of the current culture. Their performance piece, Umavusana, provides an avenue for discussing real, social difficulties, and the film, Semi-Gloss, is highlighting a deep cultural paradox. And, like pantsula itself, their work is ensuring the audience knows it’s part of a bigger story.