The Best Nigerian Songs of the Month 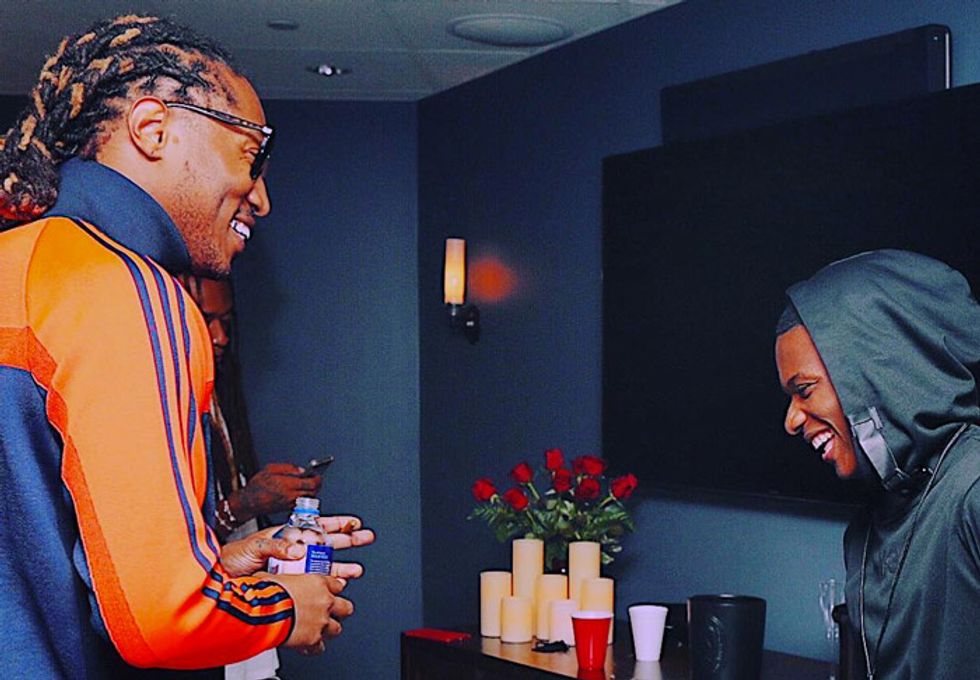 In this new series, we take a look at what we believe are some of the best Nigerian songs released in the past 31 days.

Let it be remembered that in the past month, Wizkid ascended to new heights after headlining a sold out show at London's Royal Albert Hall, a crowning achievement by any standards surely.

The bitter public dispute between Timaya and Eedris Abdulkareem over past loyalties raged on with even more associates, including K Solo and Skales, multiplying the bickering voices.

Davido, not well known for sartorial choices, launched a capsule collection called "IF" with designer Adebayo Oke Lawal of Orange Culture Nigeria, which is self-described as an "Androgynous Menswear Brand." And in typical extravagant fashion he reportedly bought necklaces for his entire team with "30 Billion Gang" inscribed on them.

It's been an exciting month for afropop from the Nigerian side of things and of the dozens of releases from the past month, here are the 12 songs we believe deserve even more attention.

Wande Coal "Oh No No" (prod. by Cheeky Chizzy)

"That is what sweet voice sounds like" said Wizkid of Wande Coal's singing right after his guest appearance at his recent sold out show at Royal Albert Hall.

"Oh No No" is Coal's latest single since the triumphs of "Iskaba" and that stand-out guest verse on Dbanj's comeback single "El Chapo." Over a swinging beat by Cheeky Chizzy, Mr Sweet Voice renews a tired refrain, "Oh no no," which he rhymes with "Your nono"—Hausa for "breasts"—adding new life to the phrase.

It'd be great to learn how "Everytime" was written and recorded, as both Wizkid and Future are renowned for freestyling songs to a finish and on the spot. The writing is as strong as the singing is engaging here. The subject matter doesn't matter and both harmonize well over Shizzi's dembow-heavy beat. The bass, as has been announced, was added by Salaam Remi.

Niniola's work with ace producer SARZ seemed to be a constant refining process of Nigerian house music which got better with each song from—"Soke" to "Ibadi" to "Shabba"—reaching perfection on "Maradona," whose beat is as majestic as anything SARZ has ever made, matched by brilliant songwriting powered by Niniola's voice. "Maradona" cannot be improved upon, but new single "Sicker" comes close as second best.

"Lighter than air but full of creative touches" is how Kiss Daniel's debut album, New Era, is described on Apple Music. The same could be said of the two big singles he has dropped this year "Sofa" and now "Yeba."

The electric guitar may root the song in highlife and the Fela inflections are easy to trace, but in total this is a confection as sweet as anything in afropop today, barring the one line "Uncle stop touching me" which spoils complete enjoyment.

It makes sense that Shaydee has adopted a new look to go with being on a new label and new management since departing EME, also once home to Wizkid.

Their last song together, "Body Bag" off Shaydee's 2016 album Rhythm & Life, was a standout on what was altogether an impressive project. The hook on "Make Sense" is simple and effective, utilizing a phrase that's on-trend. The soft percussion and sun-dappled piano is a staple of R&B, a style where Shaydee's melodies are most comfortable.

Ladipoe "Are You Down" feat. Tiwa Savage (prod. by Don Jazzy)

The first rapper to sign to the big pop machine that is Mavin Records was always going to be judged a little differently from others. Here, the hard percussion of Don Jazzy's beat is made breezy by the horns on the hook but also by Tiwa Savage's honeyed voice.

If these ears hear well, Poe is Freestyle (from Trybesmen) come forth, but in shades and inflections. His bars aim for a balanced of the playful and skillful, a sensibility that should serve him well on a committedly pop label.

Davido & Jay Sean "What You Want"

They frankly could have spent a bit more money or imagination on the video of what is otherwise a perfectly decent pop smash. Jay Sean takes the lead here while Davido's own two bar hook is used as a refrain, adding real texture to proceedings.

The Grammy-nominated duo that is Kah-Lo and Rinton continue their rich seam of collaborations on "Fasta," the former's first single as a solo artist. "Fasta" refers to a dance which Kah-Lo made up herself and which she illustrates in the video in a striking sartorial choice of silver baggy PVC shorts and hoodie.

Having written the definitive article on Kah-Lo back in February after her Grammy nomination and watched her progress with each new release from "Rinse & Repeat" to "Betta Riddim" to "Money," seeing her perform "Fasta" at the Life is Eazi concert at London's Roundhouse had an extra delight.

Masterkraft's adoption of house music has often been exceptional, especially on "Jasi" for Banky W and "Ukwu" for Timaya. "Oja" is no less impressive and Olamide's melodies always stick—his lyrics here are essentially about uninhibited merriment and he does well to straddle the big body beat by the ever mercurial Masterkraft.

You expect this one to do well as arena pop. The exhilaration Waje is belting with the commonplace phrase "feel it in the air" is carried even higher by the choral wash of background vocals over a dembow-meets-EDM beat. All of which comes second to Waje's singing, mannered in the verses but textured and even flashy in the choruses.

When a sweet voiced and mild mannered singer admits,"I never loved you but I've always kept it to myself / But I don't trust you and I think it's time you want somewhere else / You're no longer my queen," you tend not to argue or doubt that the feeling is genuine.

For the most part "Long Live The Queen" is carried on a simple guitar arrangement that breaks into a dance beat, one which sharply contrasts the strong sentiments which come before. The clever production comes second to Amadi's clear and tender writing which, in his sung voice, packs a heavy emotional punch (depending on the state one own love life of course).

Akuchi's rich bass on Olamide's "Underground," off Glory, is the most memorable guest-voice on the album. Akuchi's trap hook was hard as fuck and one expected more of the same from him, so his retooling of a line synonymous with Aaliyah "age is just a number" is unexpected.

Produced by HOD, what starts with jumpy percussive synths is soon built on with dembow percussion, snatches of horns and some surprisingly tender singing from Akuchi.