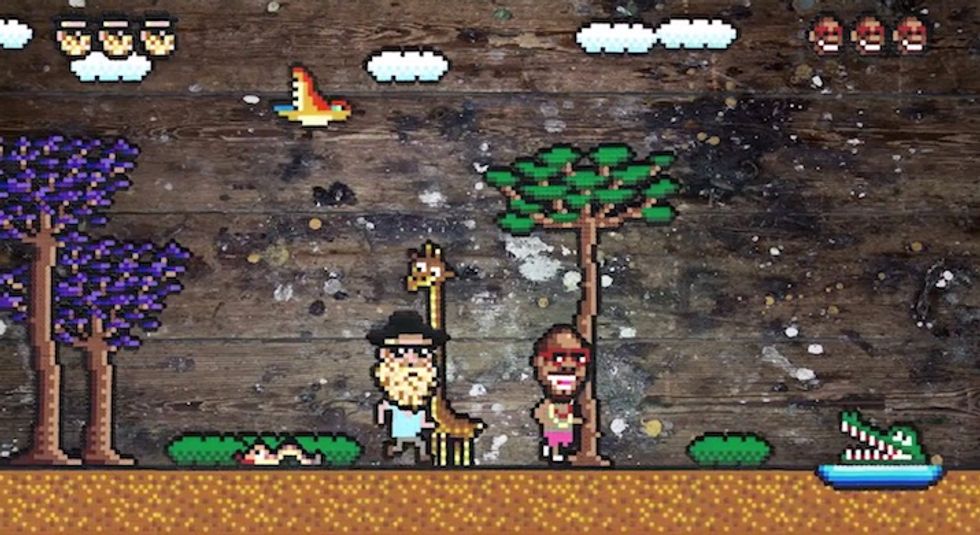 Malawian singer Esau Mwamwaya and producer Johan Hugo, better known together as The Very Best, will be releasing their latest full-length album Makes A King next month. Today, the duo share the vintage Mario Bros.-style visuals for "Let Go," their celebratory single featuring Vampire Weekend bassist Chris Baio. The new video follows the pixelated Esau and Johan as they fight off multinational corporations in Malawi and polar bears in Sweden.

"The idea was to have a video that looked like an old-school 8-Bit game with the characters and landscape made out of pixel beads," Johan explains about the visuals. "One level in Malawi where we run from street dogs and fight off Monsantos GMO monster maize plants, and one level in Sweden where we run from a fox and our enemies are the far right-wing political party. The whole video is a collaboration between Pappas Parlor and The Very Best."

The Very Best's 13-track Makes A King LP, due April 7 from Moshi Moshi, will also feature collaborations with Seye, Baaba Maal, Jerere, and Jutty Taylor. You can grab "Let Go" as an instant download if you pre-order the album on iTunes. Watch the 8-bit video for "Let Go" below and, for more, check out the band's time-lapse video for Makes A King single "Hear Me," which also features Chris Baio.