Return of the King: Tumi Molekane Reflects On 10 Years In Hip-Hop 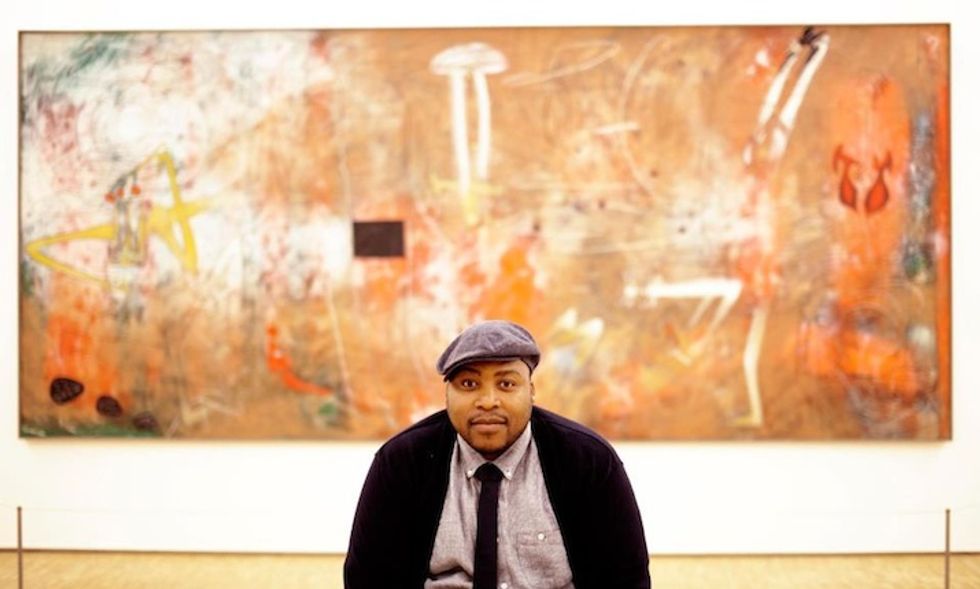 In the lead-up to his third studio album, 'Return of the King,' Tumi Molekane reflects on 10 years in hip-hop.

For 10 years now Johannesburg-based emcee Tumi Molekane has been putting pen to paper and prose to performance. From his debut album Music From My Good Eye and his time with The Volume, to perfecting his solo act and selling out New York City's historic Apollo Theater, Tumi has undoubtedly earned the right to call himself hip-hop royalty. In the lead-up to the Return of the King (Tumi's third studio album), we checked in with the controversial wordsmith to talk identity, legacy, and iconic images from throughout his decade-spanning career.

Shiba for Okayafrica: Who is Tumi Molekane in the world, when no one is listening?

Tumi Molekane: A father, a husband, a son, an entrepreneur, a visionary, a leader, a king.

OKA: How does that version of yourself parallel the public’s various ideas of you, especially in conjunction with the release of "In Defence of My Art" and subsequently Mr Nice Guy?

Tumi: Through the art I produce. I don't put on a mask or switch on a swag or dress up in a hip-hop suit. I speak from the position you might hear a vet or a doctor speak from, a member of a community with a different gift.

OKA: Your words, which clearly you have to choose carefully now more than ever, have reached academics (like, Professor Adam Haupt analyzing "76" in his book Stealing Empire), heads and even your daughter’s ears. Isn’t that a lot for one person to negotiate in one’s head? Can you tell us the beauty and the curse of something like that being your life?

Tumi: The beauty is I am a considered and highly conscious human being. One is acutely aware of pain, joy, discomfort, love and hate. The darker side to that is one can become shackled by this knowledge, harder to be impulsive, move lightly, freely. It can frustrate the child in you.

OKA: 140 characters or less doesn’t seem fair, so let’s get into it a bit more. Tell us about what the goal was behind "In Defence Of My Art." Even if the mark was missed, give us the grit on your attempt to comment on the violence, the misogyny, the tribalism and all of what makes SA what it is today.

Tumi: We wanted to reflect the gun culture that extends from freedom fighters loving their instruments to boers who fought the British and feel the same. I held an AK47 years before I held a toy gun, I could tell you that Rambo's gun was an R1 and that MR T's preferred weapon was the Uzi not because of television but because my mum would routinely tell me these things. I gained most of my black consciousness awakening through the stories of patriarchs, men who fought other men and disregarded their women's rights, people who became the very ills they sought to eradicate. I live in a rape country. Where most of my female friends and family are victims of violence. I have been a cheat, a dog, a chauvinist more times than I have been checked for it. I know powerful women who fight other women for their men. This is the motif we presented. There are other subtleties that I haven't spoken on but this as well as Kyle's [Kyle Lewis] edgy and race visual style informed the video. Also, I might add, it's very disappointing to have to explain an explanation.

OKA: What would you want to ask someone who's just heard your music for the first time?

Tumi: “How does it make you feel?”

OKA: At one point Madala Kunene was booed off stage at a concert because the crowd wanted Culoe De Song, Meanwhile, folks online think they can say we should stop caring about Lauryn Hill. What are your thoughts on music becoming something for the people rather than for the artist him/herself and that dynamic between audiences and artists of a shared experience like music?

Tumi: I think it's an interesting phenomenon, one that I am sure didn't start recently. I think a vanguard is still important, Madala Kunene is the tree from which a talent such as Culoe picks from. The problem I think might be that the two aren't in a cultural landscape where they can coexist. I mean I am sure they can, it's as easy as Culoe inviting him on stage but for them to present their respective creations, those spaces are quickly disappearing. Also there is the issue of what do we do with a Madala Kunene who doesn't have the space anymore, cuz Culoe doesn't have that problem. I think we treasure a Madala by creating systems that promote and support the passing down of his genius.

OKA: In all your 10 years, what has been the most difficult challenge to overcome?

Tumi: Relationship management. It's a highly self-absorbed life and it can make you turn everyone into an audience even your kids. It needs you to keep emotionally intelligent people around you.

>>>Click through for pt. 2 of our interview + 10 photos hand-selected by Tumi