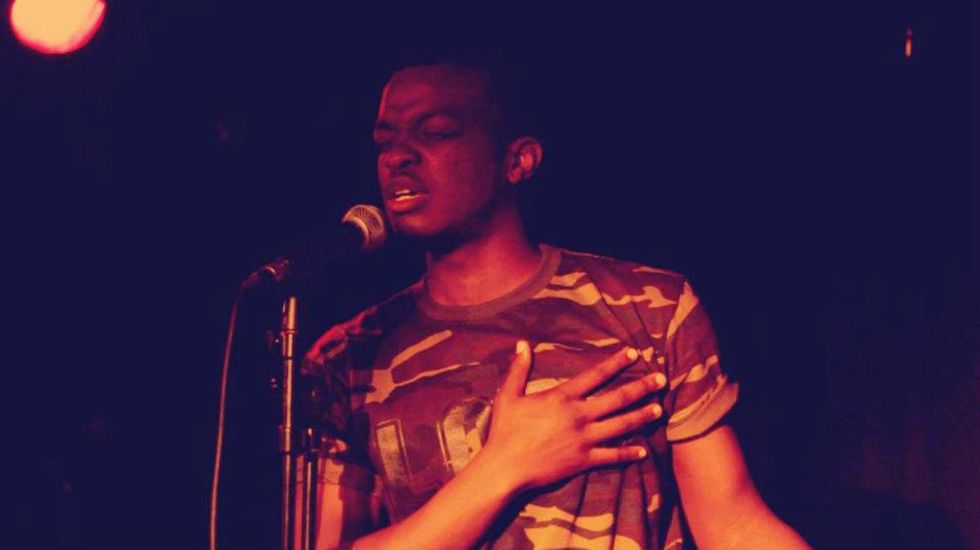 We've gathered together some of our favorite spoken word artists and writers from in and around the diaspora.

For those rainy summer days where you find yourself trapped in the house aimlessly searching for something to do, something to watch, something to get excited about, we got you covered. As a homage to the poetics of it all, we've decided to garner another summer round-up, this time of our favorite spoken word pieces and poets.

And coincidentally, as Immigrant Heritage Month carries the month, these powerful pieces mark stories on being first-generation, on names, heritage and identity throughout the diaspora. So whenever you find some free time this summer, check out these amazing lyricists and authors who are sure to have you snapping by the syllable, nodding your head and shedding tears that you'll reluctantly blame on the high pollen count (but we know the truth).

Born to Ugandan parents, George the Poet born George Mpanga is a British spoken word artist and rapper garnering national and international acclaim. Hailed for his social commentary intertwined with music and words, George the Poet speaks on his life growing up in the inner-city streets of London, of representation, blackness and youth.

The twenty-five year old University of Cambridge alum released his first EP in 2014 titled The Chicken and the Egg and has been touring and releasing pieces ever since. In February, he released his first collection of poems and lyrics titled Search Party.

Hailing from Botswana, TJ Dema is a lyricist, a poet, an artist and a founder of SAUTI, an arts and performance management organization. The former chairperson of The Writers Association of Botswana, Dema published her first chapbook titled Mandible in 2014. Dema speaks on home, on the power of words and self with a sweet confidence and unhurried resilience. Most recently, Dema gave a Tedx talk earlier this year on the contradictions and relationships between imagination and knowledge. You can watch it here.

At 19, Aja Monet became the youngest winner of the famed Nuyorican Poet's Cafe Grand Slam title. Of Cuban-Jamaican descent, Monet hails from Brooklyn, New York. In 2010, Monet independently published The Black Unicorn Sings followed by Inner-City Chants & Cyborg Cyphers in June of 2015, highlighting the double consciousness of women of color and personal growth. Monet also released an EP titled Courage in commemoration of the Maya Angelou poem. You can check it out here.

Writer and actor Carvens Lissaint is a Haitian-American poet from New York. Apart of The Strivers Row poetry collective, Lissaint is a graduate of the American Academy for Dramatic Arts and St. John's University. Be sure to also check out the poem “Strive" which Lissaint along with Striver Row poet Miles Hodges performed to a standing ovation.

Elizabeth Acevedo is an Afro-Dominicana who writes on heritage, home and her upbringing. A National Slam Champion and a representative for Washington D.C. at this year's Women of the World Poetry slam, Acevedo's work has been featured virally on numerous publications. Check out her numerous videos on Youtube (including "Hair") as well as her Tedx talk titled “I use my poetry to confront the violence against women." Her manuscript, Blessed Fruit & Other Origin Myths was selected for the Yes Yes Books' chapbook poetry prize, and will be published in September 2016.

Porsha Olayiwola is a Nigerian-Chicagoan, and the reigning Individual World Poetry Slam Champion. Her bio reads herself to be a “black, poet, dyke-goddess, hip-hop feminist, womanist, friend. Porsha Olayiwola is a performance artist who believes in pixie dust and second chances." Her chapbook Porsha O. is expected to be released in July of this year. Olayiwola made waves earlier this year for her riveting poem “Rekia Boyd" speaking of the many women killed by police brutality and the silence that often echos after, the disparities on the harm inflicted on black women and a world that often overlooks the injury.

A PhD candidate at Yale University, Alyssia Harris is an internationally acclaimed name in the world of spoken poetry. Born in Fremont, California, Harris grew up in Alexandria, VA. Apart of The Strivers Row poetry collective, Harris' famed poem, “That Girl" garnered her an HBO Documentary feature. She released her chapbook “How Much We Looked Like Stars to Stars," which won the 2015 New Women's Voice Chapbook Contest. Touring around the world, her videos have accumulated over 3 million views on Youtube.

Mustafa Ahmed is a performing artist from Toronto's Regent Park neighborhood. The 17 year-old has been making waves since he was 12 after being featured in the Toronto Star for his poetry. Writing on his upbringing, on Islam, immigration and youth, Ahmed has opened up for artists like Jhene Aiko, has performed at TedxToronto, and has traveled around the world sharing his poetry. Mustafa released his first EP, Mustafa The Poet EP in February, which you can stream here.