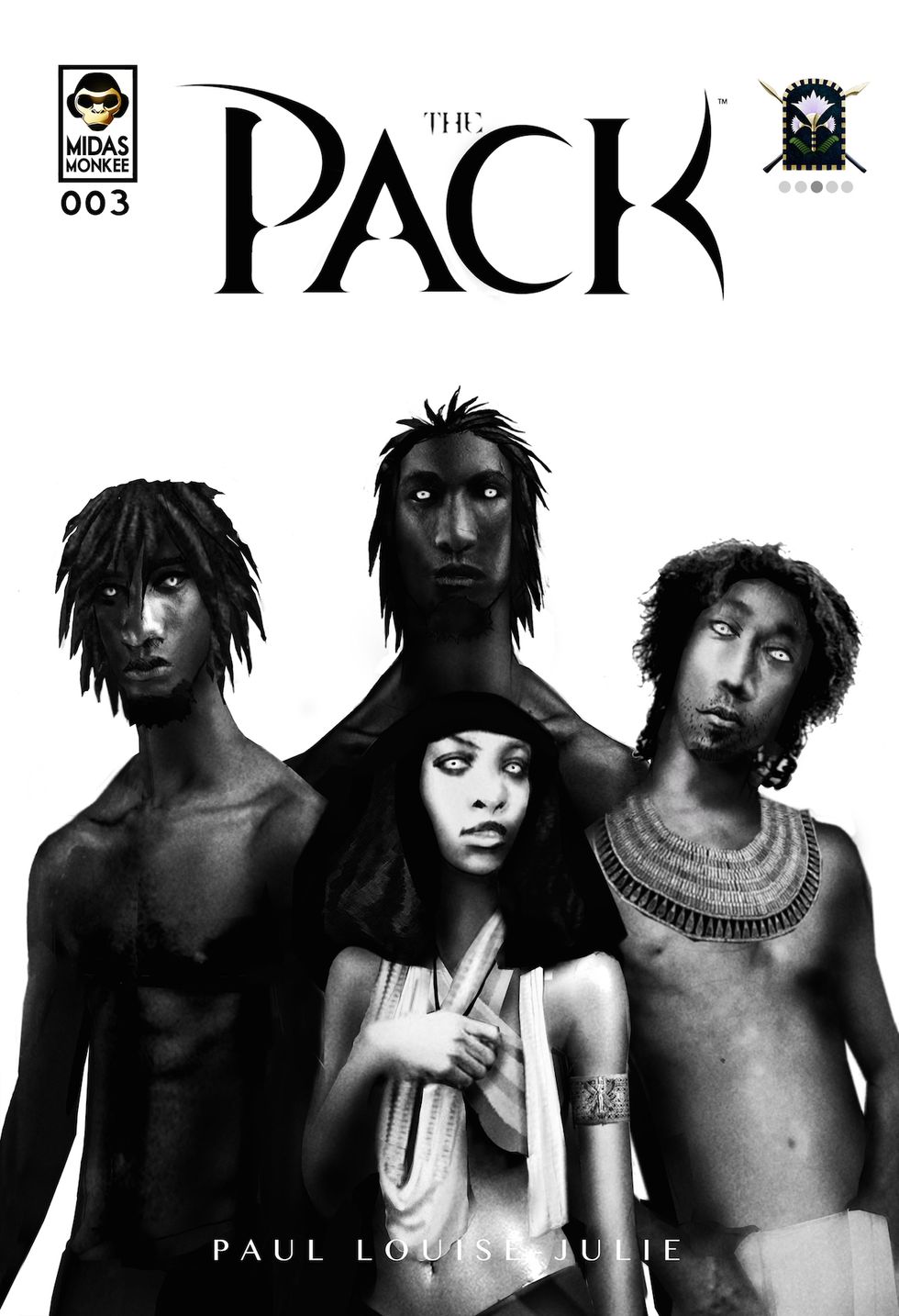 Paul Louise-Julie, The Pack, Issue 3. Courtesy of the artist.

For Paul Louise-Julie, the critically-panned box office bomb Gods Of Egypt is a symptom of a much more insidious disease. “I found it disgusting that in this day and age Hollywood can blatantly disrespect an entire people's culture,” Louise-Julie tells Okayafrica. He called for a boycott of the film, while encouraging audiences to support Black mythologies instead.

They could start with Louise-Julie’s own stories. Last March, the 26-year-old French-Caribbean artist generated some buzz around his African mythology graphic novel series, The Pack. The project is set in a fantasy world based off Louise-Julie’s research of African civilizations. In the first season, we’re introduced to a pack of Egyptian werewolves. Each season thereafter will focus on a different region of the continent.

Louise-Julie describes his relationship with Africa as long and intimate. As a child, he visited the continent frequently while his parents were on business trips. He was surrounded by African art and music at home. His parents were avid collectors, particularly of bronze sculptures.

At the same time, Louise-Julie knew he wanted to be an artist. During his senior year of high school in Burkina Faso, he became friends with a Wolof artist by the name of Moktar. One day Moktar brought Louise-Julie to a small compound on the outskirts of Ouagadougou, where he was introduced to a Wolof griot.

“For the next three hours, with Moktar translating, he recounted detailed legends and histories of majestic empires, knights, kings, wars, etcetera,” Louise-Julie explains. “He told me that one day I will take these histories and legends and share it to their ‘brothers and sisters’ in America.” Although it wasn’t another two years until he began digging deep into research of African history and mythology, the episode kickstarted Louise-Julie’s artistic journey.

A night of drinking during art school brought the idea for The Pack to light. As the story goes, Louise-Julie was playing a game with a college buddy in which they’d take two random ideas and draw something out of them. Louise-Julie picked Egypt and werewolves. The first drawing was a bit silly, he says. But he sobered up in the morning and realized that perhaps there was actually something there. That was when he came up with the concept of an Egyptian werewolf.

At the same time, he also happened to be reading J. R. R. Tolkien’s Middle-earth books. “I thought it would be nice to have an African mythology that's as deep and detailed as what Tolkien has done,” says Louise-Julie. And so he started out on the long and arduous task of turning his research into a fantasy mythology.

When he graduated from college three years later, The Pack was still just a hobby. Putting the graphic novel on the shelf, Louise-Julie found some initial success as a sculptor. He was contacted by a few big name galleries in Belgium. Just when he was about to sign a deal to have his own collection, everything fell through due to importation tax complications. Louise-Julie was devastated.

That’s when he started working on The Pack again. “The only thing I could do was I got up, I took my iPad out, and I started typing the script for the first issue.” He worked feverishly throughout the night from his hotel room in Belgium. Two days later he had a full script.

That was in January 2015. Three months later The Pack officially debuted. The third issue in the series is out this week.

But Louise-Julie’s ambitions extend far beyond ancient Africa, and even further than the faraway African futuristic galaxy he announced in October. He’s deep in the throes of masterminding an entire mythological shared universe akin to Marvel's Cinematic Universe.

He’ll put out two more issues of The Pack this year before taking his flagship series on hiatus to focus on the rest of the universe. He’ll also debut his African space opera, Yohance.

In 2017, Louise-Julie plans to unveil seven new titles under his Midas Monkee company, all inspired by African culture. The “dystopian steampunk” Voor Saga will take readers to the Kingdoms of Western Aya. The mini-series Kush, set 600 years prior to The Pack, is sort of like Louise-Julie’s own version of Beowulf or King Arthur. Candace of Nubia is a female-centric epic. Yoruba sculptures are the aesthetic inspiration from the Dwarves books. The Book of Aya chronicles the history of ancient Aya and its peoples.

Louise-Julie is also working on developing two children’s books––Ti Coco and Banjo Girl––which he hopes to use to educate his son about his Creole and Afro-Caribbean heritage.

The Pack, Issue 3: Night of the Wolves is out now and available on Amazon and iTunes.

Paul Louise-Julie, The Pack, Issue 3: Night of the Wolves. Courtesy of the artist.

Paul Louise-Julie, The Pack. Courtesy of the artist.

Paul Louise-Julie, The Pack. Courtesy of the artist.

Paul Louise-Julie, The Banjo Girl. Courtesy of the artist.

Paul Louise-Julie, Candace of Nubia. Courtesy of the artist.

Paul Louise-Julie, Book of Aya. Courtesy of the artist.