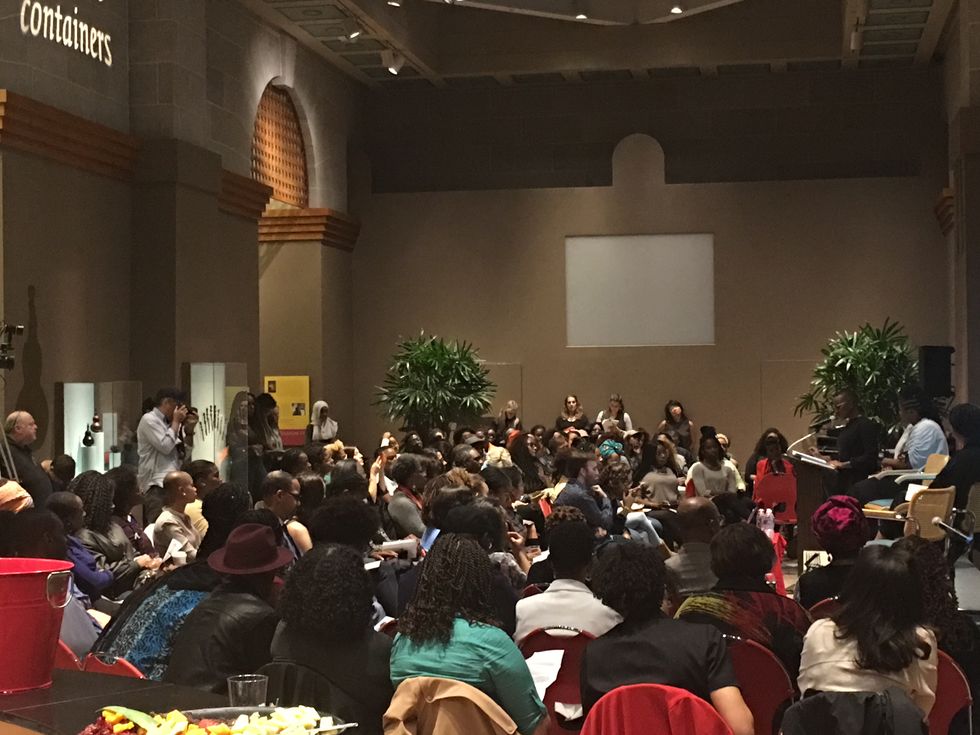 We speak with South African artist Mary Sibande and Egypt's Ghada Amer at the Smithsonian National Museum of African Art.

The event was part of the museum's new Women's Initiative—a campaign to include more African women in its collections and exhibitions—and was a lead-up to the museum's second annual African Art Awards Dinner, held Friday. This year the museum awarded Sibande and Ghada Amer, a multimedia artist and activist born in Egypt, for using their art platforms to support and advocate for women globally.

Sibande created a literal superhero to conquer South Africa's social and historical gender and racial inequalities. The life-sized figure, whom she named Sophie, is cast from a mold of Sibande's own body, so her work is truly personal. "Sophie," Sibande described when we met at the museum the day following the panel, "is meant to deconstruct the racial hierarchy by offering a new African identity." Sophie's identity is rooted in Sibande's own family history. Often dressed in a maid's uniform that is transformed into an elaborate Victorian era-style costume, Sophie's image is inspired by Sibande's grandmother, who was a maid. However, Sophie is liberated.

Sibande presents Sophie in various dynamic poses: Commanding a chariot of rocking horses or unleashing a wild gang of dogs, and other fantastical scenarios. "Sophie is not about victimization," she says. As such, Sophie remains the protagonist; she embodies the aspirations of Sibande's ancestors but those which apartheid forbade. In Sibande's work Sophie reigns gallantly and commands her setting of orchestrated chaos.

Although Sophie is the visual representation of domestic labor endured through generations of South Africa's apartheid, her image is simultaneously a negotiation of the liberation of the black female body. The figure represents an escape from the racial and gender hierarchies imposed upon the black female body and exists in a space of her own. This escapism to this idealized space is "a tapping into Afrofuturism and to a land that is not colonized," Sibande explained.

Sibande's deconstructing of the black South African female archetype resonates with American artist Betye Saar'sThe Liberation of Aunt Jemima, made in 1972. Saar upended the imagery of Jemima—a marketable offspring of the 'Mammy' figure—and armed her with a gun and grenade. A recent article titled, "How Bettye Saar Transformed Aunt Jemima into a Symbol of Black Power," described Saar's work as:

An assemblage that repositions a derogatory figurine, a product of America's deep-seated history of racism, as an armed warrior. It's become both Saar's most iconic piece and a symbol of black liberation and radical feminist art—one which legendary Civil Rights activist Angela Davis would later credit with launching the black women's movement…. In the cartoonish Jemima figure, Saar saw a hero ready to be freed from the bigotry that had shackled her for decades.

In February 2017 the African Art Museum hosted a symposium that examined "the ongoing presence of stereotypes like Aunt Jemima and the barriers those stereotypes pose to the advancement of American culture."

In 2014 artist Kara Walker, who has a decades-long oeuvre on exploring race, gender, violence and sexuality within American racial history, presented A Subtlety, an installation that examined the representation of the black body—on a gargantuan scale. The exhibition commented on the role of sugar in the history of the enslavement of people of color. The centerpiece of the exhibition was a massive sugarcoated Mammy-like figure resting as a sphinx. At the rear of the sculpture was an exposed vulva, which provoked consideration of the theme of sexualization of the black body. Ultimately controversy arose as visitors began to take selfies with suggestive hand gestures aimed at the vulva, thereby imposing sex acts upon the black female body. Perhaps the "looting" Sibande referenced is somehow an auto-response.

Sibande's co-honoree at the African Art Awards, Amer, addresses the hyper-sexualization of the female body using a diverse range of mediums, including embroidery and sculpture. For her embroidered art, Amer reworks pornographic imagery by sewing long threads over the women's faces to reclaim the moment of euphoria and return the expression of female sexuality to the subject, thereby rendering consumers of the pornographic image powerless.

A professed feminist, Amer also draws inspiration from current events into her body of work. After watching news footage from the Arab Spring, of an Egyptian policeman tackling a female protestor to the floor and ripping her clothes so that her blue bra was exposed, Amer created The Blue Bra Girls (2012). She carved images of girls in embrace on all sides of the egg-shaped sculpture, which is currently on view at the African Art museum. The sculpture is free-standing to underscore the narrative of women supporting one another.

Although both artists state their work is not made with deliberate political intent, art and politics are intertwined. One of Sibande's most notable 'Sophie' works, titled, Purple Shall Govern (2013), derives its name from the 1989 apartheid march in Cape Town, where police sprayed protestors with purple dye in order to easily identify them for arrest. "I think it will be difficult to separate [art from politics] because for me to exist is because of the politics that are around me. Or the politics of what my body projects into the world," concludes Sibande. Amer adds, "My art is not political because it is my own point of view and my experience. It's not about changing the world immediately. I believe art can change the world, and will change the world, and it is doing it gradually."