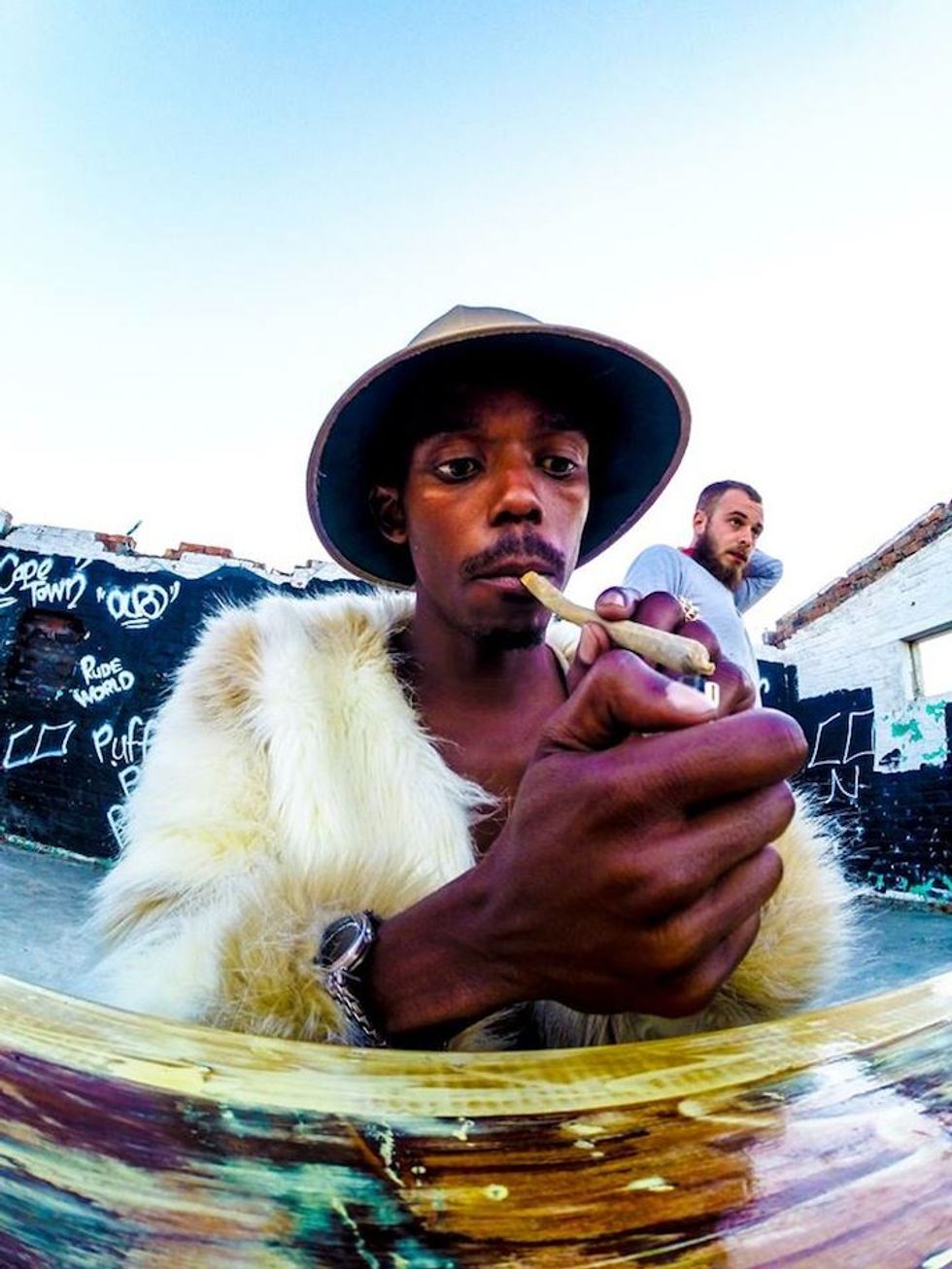 All photos by The Visual Content Gang (The VCG)

On a colourful day pumped up with BMX, hot pink catsuits, “smileys” (cooked sheep heads) and car washes, Cape Town-based rapper/producer Boolz took over the Langa township to shoot the video for "Aphe Kapa." The single comes from his latest EP, Bring Tha Hate, the follow-up to his 2013 debut, SOS/Straight Outta Skom. The EP, which was produced alongside Terrasoul, resulted in Boolz being signed earlier this year by Cape Town label Rude World Records. With a new single, "Ekasi," set to drop on the 15th of this month, Boolz is rising fast in the city and beyond.

The "Aphe Kapa" video, shot by audio-visual heavyweights The VCG, features cameos by some of the city’s most notable and talented creatives, such as the outspoken Dope Saint Jude, director Chris Kets, art sexpert Laura Windvogel (aka Lady $kollie), Swiss beatsmith import Maloon TheBoom and graffiti champion Skubalisto. Like the video, Boolz's new album is fresh, clean-and-concisely put together with hints of trap, kwaito, electronic downbeat and rap true to the artist’s no-fear personality. Read our short Q&A with the video's director, Takezito below, and see above for an exclusive behind-the-scenes look on the set of "Aphe Kape" with Boolz and the VCG.

Shiba for Okayafrica: What's your take on Cape Town as a creative space for musicians like Boolz and the people who make things happen for the scene such as you guys at the VCG [The Visual Content Gang]?

Takezito: Cape Town is a great place to come up with ideas, but not that great for executing them. There's lots of meetings and networking sessions, but not any financial or productive assistance– just a lot of talk. We're tackling this by taking a guerrilla/street approach to producing material that speaks to the masses in Cape Town. There is a lot of circle jerking in this city but there are underground platforms like Cold Turkey and YOH! that give a platform to up-and-coming talent and keeps the music scene innovative.

OKA: What was putting together the overall production like? Who was involved and how do you feel about the finished product?

Takezito: It was a really smooth, but tough process – lots of hard work but all the stars aligned to make it happen. I did a lot of the work myself, as is common with any passion project I undertake (I like to get my hands dirty) but I had a great core team working with me who helped the hustle and everyone played their part. My Assistant Director, Chris Kets, helped me push the concept and did a lot of hustling. Lady$Kollie made sure that we got the right aesthetic feel in the video by sourcing and producing the props and casting key people such Jana 'Babez' Terblance who plays the unusual video vixen. Tracy-Lee Rosslind did an amazing job of getting and making the freshest styling. My business and creative partner Zunaid The Editor annihilated the edit and second camerawork. Skubalisto did a dope job on the graf. Zahier Isaacs, founder and maker at Fly Wheel Chariots supplied his hand-made bikes, which made the video pop. Also, when you're in the kasi, there's always someone who has what you need and is willing to help out - this video would not be possible without the help of Boolz' clique who were basically the crew and cast of the video. Last but not least, Zunaid's wife, Angelique, did the catering because at The Visual Content Gang it's always a family affair - we like to keep it #GangRelated. We are all extremely proud of the outcome of our combined efforts.

OKA: Lastly, what would you like viewers to take from the track and video once they've seen it?

Takezito: That Cape Town is more than just pretty scenery – there's a lot of real life going on too that sometimes gets lost in the touristy vibe. There's a bit of underlying meaning or thought-starters in the video for people to consider if they want to analyse it, which I hope some do. There's a bit of race and gender concepts in there. A bit of cultural dichotomies, maybe. But at the end of the day, this is a music video so I want people to be left thinking: Boolz is the shit and Cape Town is the shit and we're having fun doing what we want and love. "Aphe Kapa Sizpholele, Aphe Kapa Sizmamele!"