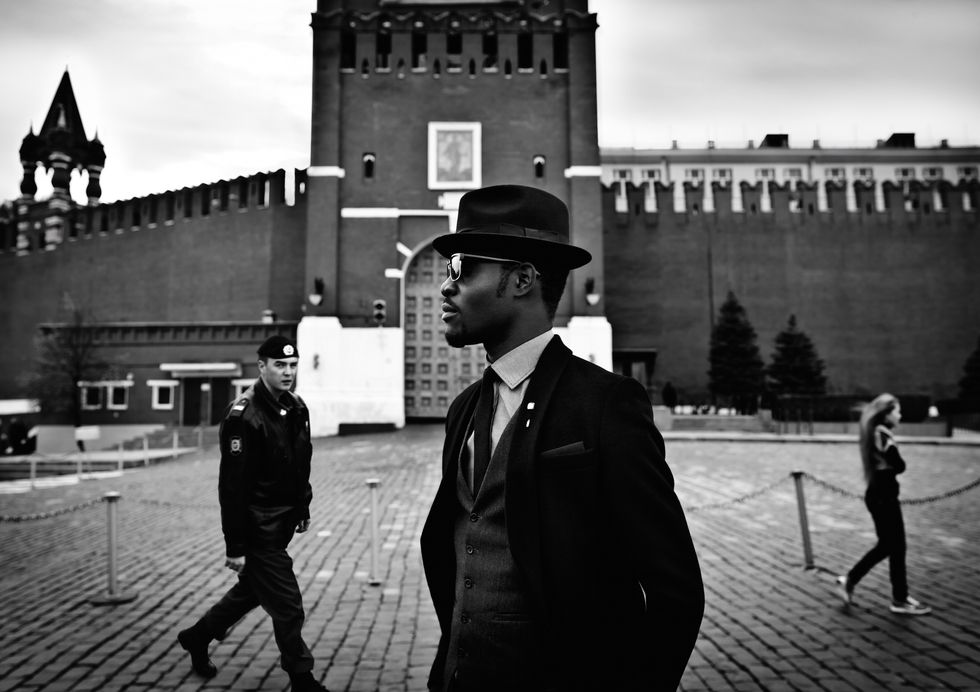 Dandy Lion: (Re)Articulating Black Masculinity is on view at the Museum of the African Diaspora (MoAD) alongside The Grace Jones Project.

The worldwide style phenomenon known as ‘Black Dandyism’ is showing no signs of slowing down. Now, U.S.-based curator and researcher and New Orleans native Shantrelle P. Lewis is bringing her Dandy Lion project to the Museum of the African Diaspora (MoAD) in San Francisco.

The traveling curatorial show examines the rise of Global Black Dandyism through the work of photographers and filmmakers from throughout the African Diaspora.

“Their subject matter is young Black men in city-landscapes across the globe, who defy stereotypical and monolithic understandings of masculinity within the Black community,” the organizers explain. “Dandy Lion also confronts the myth of the young Black man as ‘thug’ via the juxtaposition of an alternative style of dress. Using the African aesthetic and swagger as a point of departure, dandy lions appropriate classical European fashion elements to articulate a self-actualized identity. The men photographed are exceptional in both style and manners and provide the opportunity for a paradigm shift to occur as it relates to how men of African descent are seen and treated by society-at-large.”

Images featured in the project were shot all throughout the Diaspora, from Brooklyn to Johannesburg to Kinshasa and London.

With Black Dandy, Lewis hopes to challenge notions of popularized urban Black masculinity and define contemporary expressions of the Black Dandy phenomenon. “Juxtaposed against an urban backdrop where the clothing of choice for many black men consists of a pair of sagging pants, exposed boxers, jerseys and white tees – the ‘hip hop’ generation has produced another phenomenon of style – the New Age dandy,” the organizers add. “Noticeably different from his historical minstrel or Harlem Renaissance queer prototype, the 21st Century Dandy Lion is more masculine than metro-sexual, more of an expression of the African aesthetic and mode of swagger than an imitation of European high-brow society. A Dandy Lion is a contemporary man of SWAG who oozes creativity and makes well thought-out decisions in expressing his individuality. A performance and embodiment of sophistication, dandies are gentlemen of exceptional manners who consciously postulate what it means to be Black, masculine and full of style not simply as performance but an embodiment of a lifestyle. Over the past few years, a growing trend of Black dandyism has been observed and documented via major media outlets, film and literature.”

Dandy Lion: (Re)Articulating Black Masculinity opened last Wednesday at MoAD and will run there through September 18th alongside The Grace Jones Project, a group show curated by Nicole J. Caruth that explores the influence of the prolific model, actress and singer.

“We’re thrilled to bring both exhibitions to the Museum of the African Diaspora as we consider notions of identity and representation that tie both exhibits together,” states Linda Harrison, Executive Director at MoAD. “The Grace Jones Project unveils a group of artists engaging with the black body and queer identity. Dandy Lion: (Re) Articulating Black Masculine Identity beautifully shows the connections within the Black Diaspora, representing the Black dandy culture via very personal, provocative ways of dressing. Whether from the UK, South Africa, or the United States, there is a common stylish communication code. Each exhibition will take the viewer through a journey distinguishing the wearer while questioning cultural and social status.”

Kia Chenelle, The Waiting Man I, 2013. Archival pigment print. Courtesy of the artist.

Dandy Lion: (Re)Articulating Black Masculine Identity is on view the Museum of the African Diaspora in San Francisco through September 18th, 2016. Visit MoAD for more information on the show.
Popular
News Brief
afrima