Aboard the East African Soul Train, a Traveling Artist Residency on the Kenyan Railways 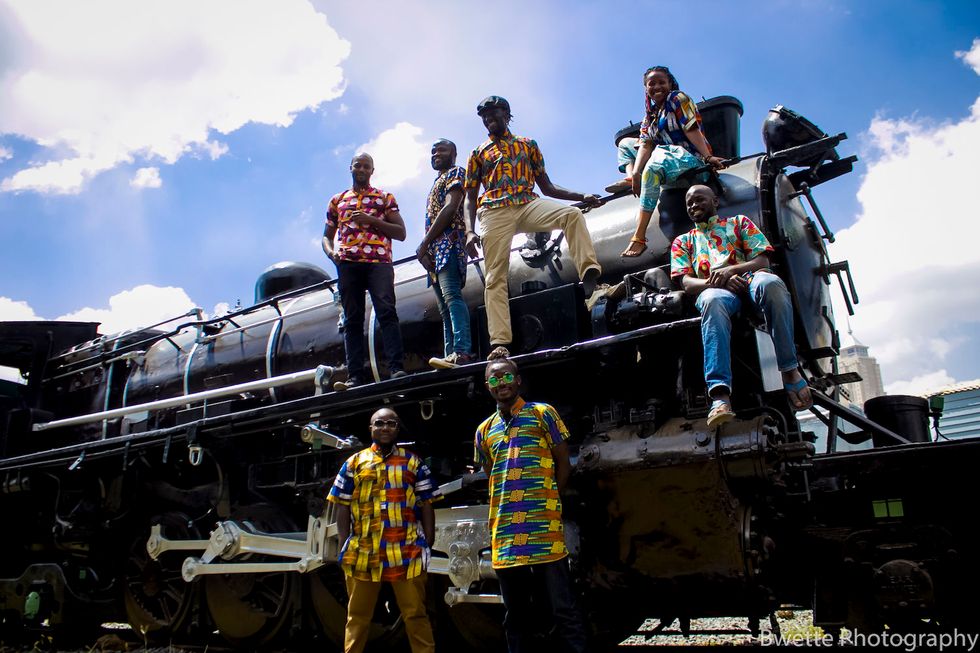 Last month, I boarded a train with a group of eclectic individuals from all over East Africa.

We were on a unique project to encourage artists to explore identity, time and space through their art and collaborations. The East African Soul Train (E.A.S.T) is an annual traveling residency that brings together artists and passengers on a journey of self discovery while traveling on the historic Kenya-Uganda railway tracks.

In this second edition of the project, a class of forty creatives including visual artists, singers, dancers, painters, music producers, writers and fashion designers were selected to attend the five day residency. E.A.S.T.'s artistic director this year was Ghanaian songwriter Jojo Abot, who's also a curator of AFRI-NA-LADI, a multimedia residency program with up-and-coming artists from Nairobi.

The train rumbled out of the Nairobi Railway Station on a Friday in February on its way to the coastal city of Mombasa with 99 artists and passengers who had jumped on-board for the journey. Soon after our departure, Kenyan beat boxer and poet Checkmate Mido engaged me in a conversation elaborating how he came up with the theme for this year’s residency, which was “Kovu Safarini” or “Scars along the way.”

In the middle of our conversation, the adjacent cabin burst into life with a live drum-set and cypher and before I knew it Checkmate had left me to join the fun. The engines roared as they powered this incredible vehicle and all that was left, was the long journey ahead.

Despite having interacted briefly in the E.A.S.T boot camp the previous day, more socializing occurred on the train. “Dancers normally hang out with dancers, visual artists with visual artists and the like, but this brings us all together,” Jackie Manyaapelo, my South African cabin-mate told me. The residency was opening up room for interdisciplinary collaborations which normally don’t occur so readily between artists.

The ride on the train track, dubbed the Lunatic Express, was rather wobbly, noisy and confining for those with mild claustrophobia. Regardless of that, it was full of activity and enthusiasm at all times. There was constant movement up and down the carriages as we peeped into different cabins trying not to miss out on any of action.

When you put highly-talented people around each other you shouldn’t really be surprised when delightful things happen. A beat making session with Blinky Bill (Just A Band) was underway in the dining carriage, artist Michel Ong’aro and his band broke into song in their cabin and the film crew was sprawling in every direction trying to capture as much as possible.

Interestingly enough, some of the passengers on the train weren’t creatives but had taken advantage of the passenger ticket available to also participate in the one of a kind event. A Tunisian born passenger, Ahmed, told me he found out about the East African Soul Train online, thought it was a cool idea and therefore booked his flight to Kenya.

Another couple, Tine and Henning from Germany, used the train as a means to kick off their vacation, and told me of their plans to explore Kenya and subsequently attend the Sauti Za Busara festival in Zanzibar.

In some cabins there was music playing in the background as people engaged in deep conversations. Not only was the train bringing together different kinds of artists, but there was also a fusion of different cultures, ages and races. The train provided a massive opportunity for passengers to exchange ideas and perspectives, build cross-border relationships and generally make new friends.

“An artist could make only one significant connection on this train but that connection could lead to a collaboration that sees them through the next five years of their career,” says Poppy Spowage , the co-founder of E.A.S.T who adds that the project’s true aim is to act as a catalyst for creative pursuits.

Needless to say, getting some sleep on the train wasn’t easy: drum beats, guitar riffs and laughter could still be heard across the carriages as the sun rose over the scenic landscape of Kenya's Tsavo National Park. The arrival in Mombasa was long-awaited but the journey wasn’t over. From there we travelled 51 Km by bus to Distant Relatives Eco-lodge in Kilifi where the rest of the residency would take place.

In Kilifi, the artists continued to work together in their groups allocated according to specific disciplines. Each group had an assigned 'artivator': an established artist who guides and encourages the artists to create and collaborate freely. This year’s 'artivators' included reputable individuals such as visual artist Michael Soi, who's taken the world by storm with his commentary of contemporary life in Nairobi, Gloria Wavamunno, founder of Kampala Fashion Week and musician Mzungu Kichaa of Tanzania.

One of the highlights for me was witnessing veteran Kenyan producer Blinky Bill team up with Congolese rapper Lebon to create a song likely to rock this part of the continent, if released. Collaborations like this continued to prove why E.A.S.T was a necessity during this intriguing time in the East African music scene.

The transition from a day-long train ride to a relaxing, tropical location is a key factor in the psychology behind the programme. Imeldah Kondo, a young visual artist based in Nairobi says that she’s always longed for intense artistic workshops that challenge creatives to create fascinating works within a limited time period and E.A.S.T gave her a crack at it. Creativity levels seemed to peak in this environment and this was observed when each group showcased their work at the final event of the residency.

You know what happens when artists create without the pressures of being perfect or other high-demand situations? When they create just for the love of it? Magical things happen.

The writers and poets chanted an empowering feminist-inspired piece; the musicians enthralled us when they performed the chart-worthy songs they had effortlessly composed together. My personal crowning moment though, was when the dancers and painters collaborated to produce a powerful performance-art installation coupled with vocals and a poignant tone that engrossed everyone who was watching. I couldn't help but feel a full range of emotions as the residency finally came to a close.

Regarding the future of E.A.S.T, co-founder Geraldine Hepp mentions plans to build more partnerships to expand the project and accommodate artists from the wider African region and beyond. She also admits that, although the residency and final event were successful, the true impact of the experience will be felt and seen weeks, months and perhaps even years from now.