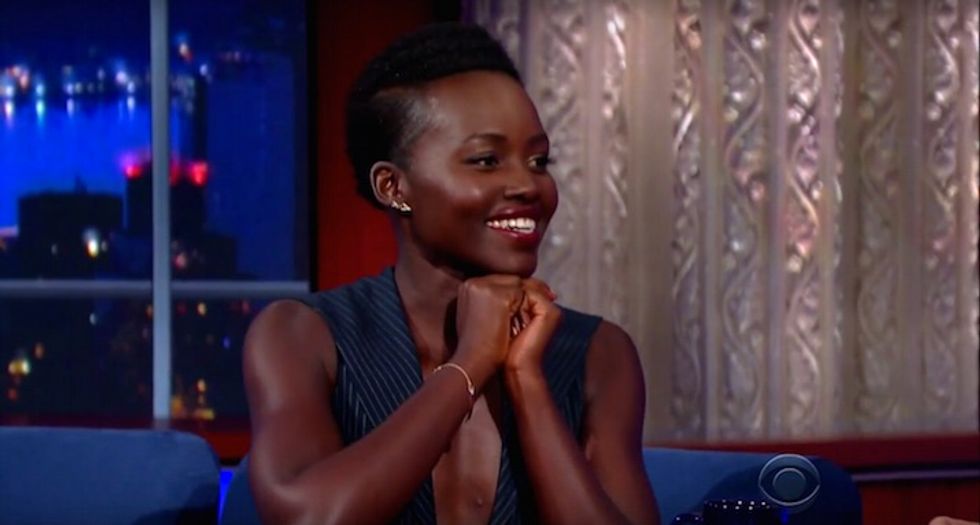 Lupita Nyong'o appeared on The Late Show With Stephen Colbert to talk her New York stage debut in 'Eclipsed' and do her best "silly walk."

"It's this visceral and lighting account of what it's like to live through a war," Nyong'o told Colbert about the play. "We meet five women who are trapped in the Liberian Civil War. And at the start of the play, there's three of them who have been captured by a rebel commander. And it's the return of a fourth who since joined the rebel army that sets the play in motion."

"It's quite intense, but Danai has done an amazing thing," the 32-year-old actress added. "She's infused humor into it, because at the end of the day when you live in such extreme situations, you still have to live. And it's about these women and how they cope with the extreme situations and what choices they make in a world that's devoid of choices."

Later, Colbert asked the Academy Award winner and two-time Vogue cover star if she'd ever want to do a comedy. "Yes, I would love to do something lighter. Comedy is very scary, and I like to be scared," Nyong'o said.

But does she like being embarrassed? "I used to, really. I used to like doing that," Nyong'o told Colbert. "Me and my friends, we'd do these silly walks on the street, and you'd just break out in a silly walk. I don't do that any longer, because maybe one too many people were looking at me." Colbert then suggested she do her silly walk there. While The Late Show host did his best "really cool guy who can't walk down stairs" impression, Nyong'o gave an excellent "paranoid person whose pants are falling down."

Eclipsed opens October 14th at New York's Public Theater. Watch Nyong'o do her silly walk in the clip below, and head to Late Night for the full episode (Nyong'o's appearance is from 17:00 to 25:00).

#Thunder and I hit up the @ColbertLateShow to talk about #EclipsedPlay coming soon to the @publictheaterny and some sillier things that will be seen and not mentioned. Catch it tonight at 11:35pm EST. #forcefriday #stormtrooper