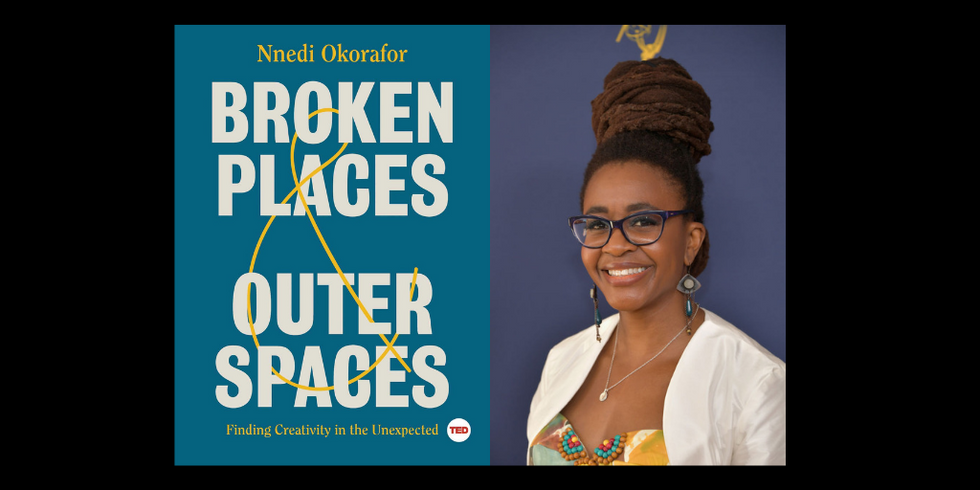 This is the first work of non-fiction to come from the prolific science fiction writer.

Broken Places & Outer Spaces: Finding Creativity in the Unexpected is her memoir chronicling the journey from being a star athlete to facing paralysis—to her eventual creative awakening. Published by TED Books, a Simon & Schuster imprint, the prolific author gives us a powerful example and guide of how our perceived limitations can have the potential to become our greatest strengths.

"I've been writing this on and off since it all happened," she explains in a thread on Twitter. "The original manuscript is over 300 pages. I *needed* to record every detail while they were fresh, so there are parts of this book that I wrote while I still wasn't quite able to walk."

Here's a snippet of the synopsis from the publisher below:

Nnedi Okorafor was never supposed to be paralyzed. A college track star and budding entomologist, Nnedi's lifelong battle with scoliosis was just a bump in her plan—something a simple operation would easily correct. But when Nnedi wakes from the surgery to find she can't move her legs, her entire sense of self begins to waver. Confined to a hospital bed for months, unusual things begin to happen. Psychedelic bugs crawl her hospital walls; strange dreams visit her nightly. Nnedi begins to put these experiences into writing, conjuring up strange, fantastical stories. What Nnedi discovers during her confinement would prove to be the key to her life as a successful science fiction author: In science fiction, when something breaks, something greater often emerges from the cracks.

In Broken Places & Outer Spaces, Nnedi takes the reader on a journey from her hospital bed deep into her memories, from her painful first experiences with racism as a child in Chicago to her powerful visits to her parents' hometown in Nigeria. From Frida Kahlo to Mary Shelly, she examines great artists and writers who have pushed through their limitations, using hardship to fuel their work. Through these compelling stories and her own, Nnedi reveals a universal truth: What we perceive as limitations have the potential to become our greatest strengths—far greater than when we were unbroken.

Starred reviews have already been rolling in for Okorafor's memoir, where Publisher's Weekly emphasizes that her story will inspire any reader.

We'll also be seeing Okorafor flex her creative muscles in the television world, as she's established her production company, Africanfuturism Productions, Inc.just a few months ago. It was recently announced that she will be working with Viola Davis and Kenya's own Wanuri Kahiu (a dream team, really) to develop Octavia Butler's 1980 novel, Wild Seed, into a series.