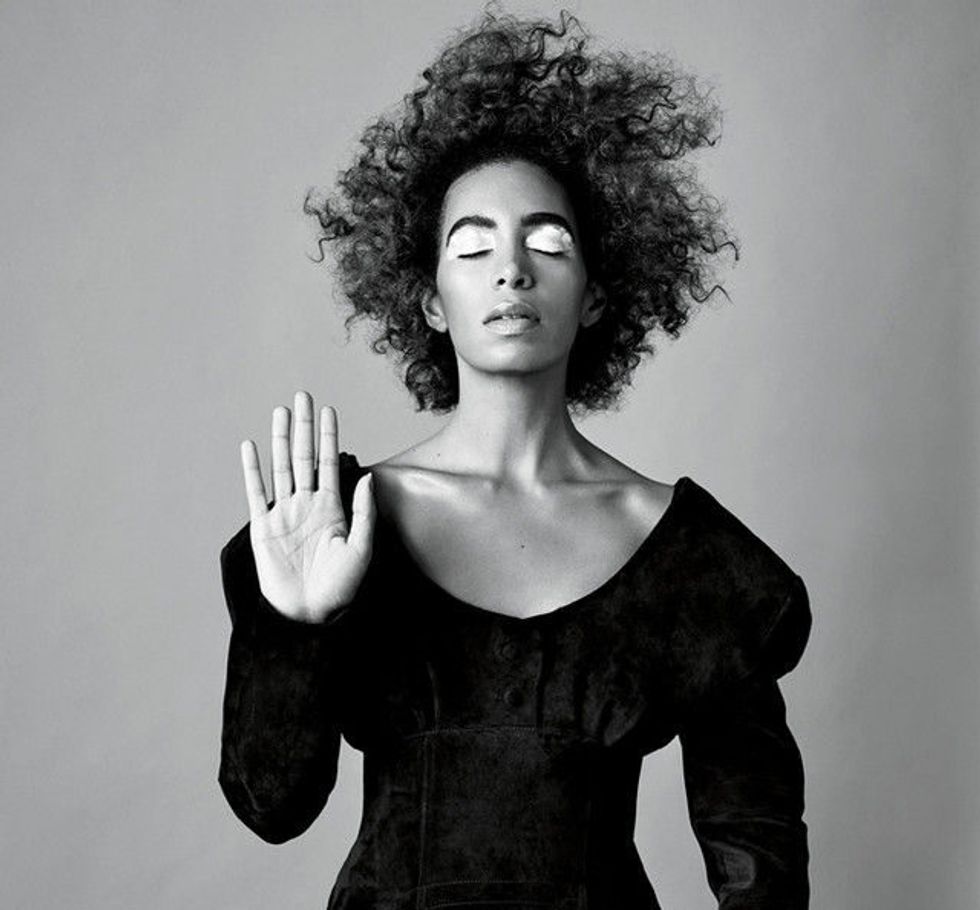 Here are some of our favorite gems from Solange's interview with Bust Magazine on black feminism, the power of the internet and more.

Oh, Solange. I have always admired her for being a wildly fashionable, deeply soulful and emphatic artist and performer with a passion for the unique and unconventional. But lately, Solange has been even more outspoken about something that is very dear to her heart, and mine, and hopefully yours: feminism. And it’s a better time than ever to be outspoken about equality, especially since she has the platform to inspire instrumental change through her music and words.

In her latest feature in Bust Magazine, the fashionista-feminist-futurista stuns us in billowy, textured ensembles, thick, graceful eyebrows and a wispy, curly fro. Her movements, soft yet commanding, embody the many sides of her womanhood. But most of all, her words from the interview are dope as fuck.

A preview of the interview was released on Bust, with a cover image sporting the quote “I Am a Proud Black Feminist.” Of course, Solange isn’t the first black woman to declare this phrase, but it is still a revolutionary, groundbreaking act whenever one of us says it—especially when it’s decorated on the front of a magazine headed by white women.

Society may deem the phrase “black feminist” as audacious, but for me it’s as simple as calling myself a writer: natural, obvious and the got damn truth. I’m sure it’s the same for Solange.

Here are some highlights from her interview.

On growing up around women:

"I grew up in a house with five women. My mother, my sister B [Beyoncé], Kelly [Rowland, of Destiny's Child] actually moved in with us when I was five. And my other—I also consider [her] my sister, but she's actually my first cousin, Angie—she moved in with us when I was 13. So this household was all women's work. Literally. And there was absolutely nothing that couldn't be done between us. My father was super smart and brilliant and instilled many wonderful qualities in us, but my mother was really the heart and soul of the family."

On the importance of intersectional feminism and seeing all women rise:

"I am a proud black feminist and womanist and I'm extremely proud of the work that's being done. I'm a feminist who wants not only to hear the term intersectionality, but actually feel it, and see the evolution of what intersectional feminism can actually achieve. I want women's rights to be equally honored, and uplifted, and heard...but I want to see us fighting the fight for all women—women of color, our LGBTQ sisters, our Muslim sisters. I want to see millions of us marching out there for our rights, and I want to see us out there marching for the rights of women like Dajerria Becton, who was body slammed by a cop while she was in her swimsuit for simply existing as a young, vocal, black girl. I think we are inching closer and closer there, and for that, I am very proud."

On the complexities of being a black female singer songwriter:

"I think that the black female voice, especially in R&B music, has always been kind of accessorized. Because I guess it's supposed to be just so easy and effortless for us, as vocalists. [Singing] is something that a lot of people think we are just blessed with. But I consider myself a songwriter first, and in the trajectory of what I'm trying to create, singer comes last. I'm really invested in storytelling."

On the captivating visuals of A Seat at The Table:

"I think that as women, and as black women in general, we're always having to fight two times harder. And you know, even with my videos, I was so invested in the visual storytelling, of wanting to see black men and women in the way that I see them every day, which is powerful but graceful but also vulnerable and also regal and stately. And how we use style as a language, and our pageantry, and how we communicate."

On learning from other women, feminists, womanists and intellectual thinkers:

"I'm really grateful that I'm also a student of black feminists and womanists…and of women who have created this terminology for us to use as we carve out this space."

On the educational power of the internet:

“I’m a high school-educated woman. And I rely on incredible women like [the groups Crunk Feminist Collective and Black Women’s Blueprint]…to really guide me through the process of carving out my feelings, and how I articulate them.”