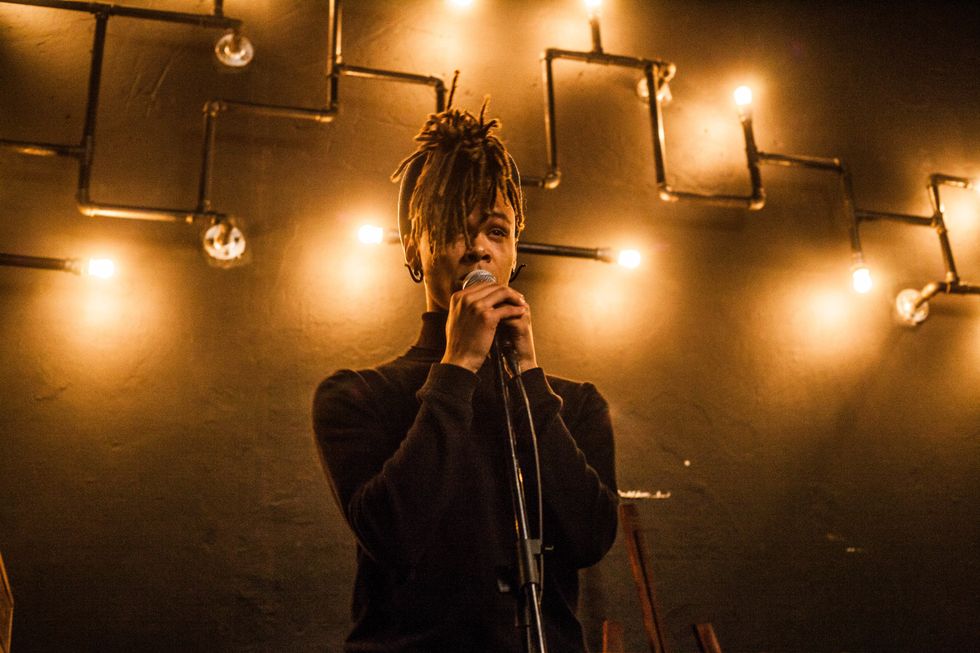 Joshua The I Am. Photo by Sabelo Mkhabela.

Featuring songs by Joshua The I Am, Reason, Sun-EL Musician, Zonke, Solo & BETR Gang and more.

Our list of the best South African songs of the month includes new singles that dropped in April alongside those that were highlighted by getting the visual treatment.

J Molley's life done changed. He's the youngest in club, sipping seven bottles. "Holy shit, think I just took a picture with your bitch/ New money, who this?/ New money 5 digits," he sings on the hook. "Seven Bottles" proves that less is more—the artist is succinct in giving an update of his life, using autotune in his own unique way.

Sun-EL Musicianowned 2017 with "Akanamali," his collaboration with Samthing Soweto. His new album, Africa To The World, proves "Akanamali" wasn't beginner's luck. It's packed with heaters and "Sonini," the latest video single, is a dance floor-ready Afro house banger that deserves a spot in your playlist.

From a stellar album, Tour Dates, comes the first single which features three of the best rappers from the East Rand. Each rapper talks about their vices and addictions. In true Solo fashion, it's bars everywhere, and his guests deliver, too. Also, great music video.

Joshua The I Am "Glitch"

Joshua The I Am's latest video single stylistically references 2010 Drake. The artist croons about a relationship gone wrong in a clever way. Read more about Joshua The I Am here.

The remix of Shekhina's 2017 hit "Suited," features Nigeria's Mr Eazi. Nigerian producer SynX gives "Suited" a new life in which it leans towards Afro pop. Mr Eazi adds a new verse, which transforms the song into a great duet.

Una Rams' latest single, which was originally released in 2016, sees the man serenade us with his effortless vocals. The instrumental has subtle dub reggae sensibilities and makes the song an oxymoron in that it makes you happy when it talks about the ups and downs of love.

ProVerb's unmatched wordplay and storytelling shines in his latest single. The song sees the talented MC imagine what heaven looks like. He pays respect to fallen stars ranging from Winnie Madikizela-Mandela, Hugh Masekela, Steve Jobs, Maya Angelou, Gugu Zulu and more. And in pure ProVerb style, he finds an engaging way to weave these people's stories together in such a way you can picture his version of heaven. He makes it look so easy, your fave probably thinks they can do it, too.

It's the thumping bassline by Wichi 1080 coupled with Rouge's charisma and dynamic delivery that make "Dololo." And that Big Star feature is just cherry on top. Solid song from an equally solid album.

On the video for his 2017 single, Kwesta chronicles his journey to the US to perform at SXSW. The song "Hyena" is Kwesta rapping like his life depends on it as he usually does.

Zonke created a lane and she stuck to it. "Tonight" is replete with soul and wouldn't feel out of place on your party playlist too. It's the somber keys, the light-hearted bass and the reverb applied to her vocals that create the song's wholesome yet contradictory mood.

Two of the newest trappers, Zoocci Coke Dope and Yung Swiss, connect and the result is explosive. "GLDN" boasts a bassline that your ear will both love you for and complain about—it's colossal. And that electric guitar solo towards the end is what's right with the world.

Reason, Swizz Beatz and jazz legend Sibongile Khumalo connect for a moddy collaboration that focuses on poverty, drug addiction and all the ills ordinary South Africans go through. "Azania" is somber in tone and Reason proves yet again that he's a lyrical monster.