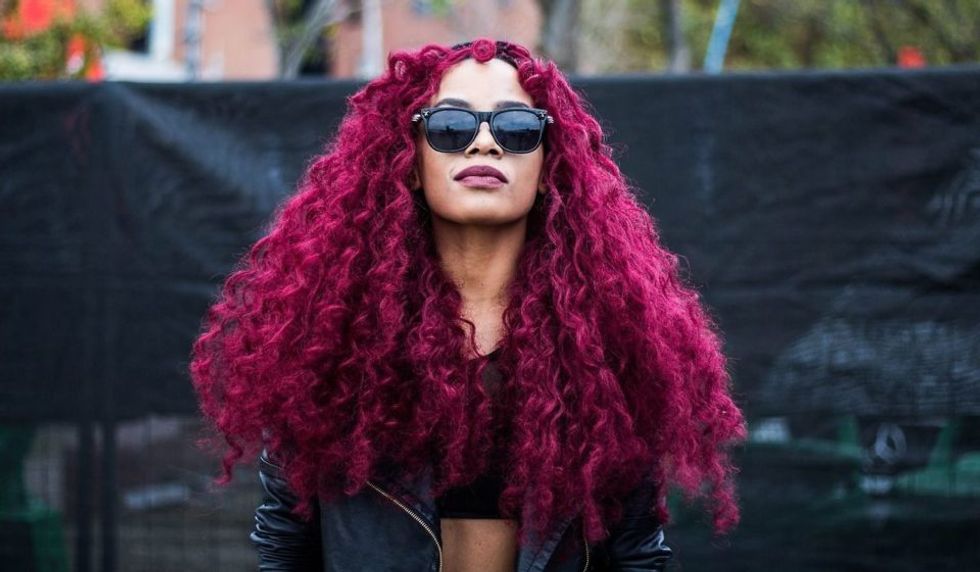 Her ability to rap rings around her peers and hold a note—without laying on the auto tune too thick—makes her a worthy contender for the throne. Equally adept at weaving catchy hooks and piecing intricate rhyme schemes at speed, the rapper of Congolese heritage flexes really hard on her debut offering, The New Era Sessions.

On The New Era Sessions, Rouge traverses over four themes. We begin our sojourn with the rapper's take on old-school rap before she floats over trap-infused beats. The middle of the album is more intimate as "Simon Says" and "The Break Up" deal with the theme of love. The final stretch of the record sees Rouge's braggadocios side make an appearance in celebration of both women's empowerment and the album's near-perfection.

It maintains its presentation as a therapeutic piece of work that places us in the past before guiding us into the future. The cover artwork is a perfect representation of Rouge as a futuristic South African rapper, and perfectly matched by her sister's robotic narration throughout the album.

In a refreshing move, the structured approach doesn't stifle the project's sonic versatility. The New Era Sessions proves that lyricism doesn't have to be sacrificed when riding over dope 808s. It joins Reason's Love GirlsandStogies T's self titled album as works that try to deal with current issues without losing their listenability.

What the album also proves is that Rouge deserves to be named alongside these two stalwarts. She stakes a claim as one of the most technically adept rappers out in South African hip-hop right now. She's proven her skills before, serving fire flames on Ms Cosmo's "Connect," AKA's "Baddest" remix and DJ Switch's "Now Or Never" remix.

What this album shows is an ability to craft more than just great guest verses though. It's clear that she puts good songs together, but it's their relationship to her larger themes that makes this offering truly stand out.

Throughout these themes, Rouge doesn't relent with catchy hooks constantly accompanied by tightly packed rhymes. The album gives us insights into her anxieties, ambitions and musical journey. The bass lines, her intonation and subject matter are all well thought out, but it doesn't ever feel like the album takes itself too seriously. Perhaps this is most apparent with the album's closing act.

Rouge's decision to close off her debut project with her three biggest singles is a brave one. From a demand for our attention on "Sheba Ngwan'O", to getting your doe up on "Mbongo Zaka" and carefree relationships on "No Strings," these cuts are meant to celebrate the autonomy Rouge lives by. It also proves the strength of the album and creates a triumphant ending. All three songs tie into the theme of being empowered and precede the gorgeous accappella "Mabele" which is a Lingala hymn symbolizing our beginnings from, and eventual return to "the soil".

The New Era Sessions is a great listen and succeeds on so many levels. It's a strong idea backed by a technically flawless performance and has tons of replay value. It's amazing as a debut, and a sign that better is to come. As "Sheba Ngwan'O" encourages us, we'll be keeping a lookout for bigger things from Rouge.

Stream The New Era Sessions below, and download it here.