9 Vintage African Records You Need in Your Life 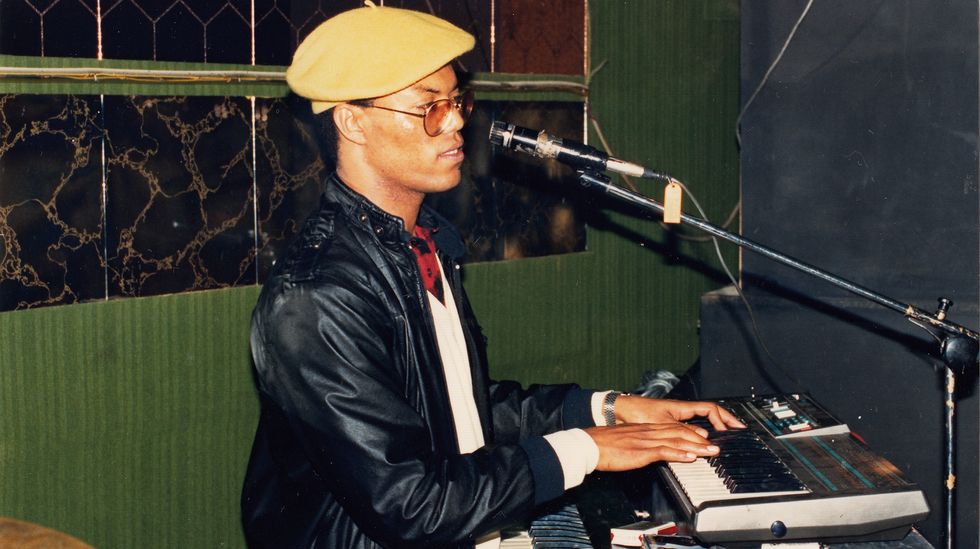 Check out more lists of great African products here and over at the Okayafrica Shop.

From long lost Ghanaian cassette tapes to Northern and East African record digging finds, this list rounds up our favorite vintage albums and compilations releases that have dropped recently.

Read ahead for a batch of re-released material from Analog Africa, Now-Again, Awesome Tapes From Africa, Strut Records, and many more.

Listen to the extended Vintage African Records playlist on OkayAfrica's Apple Music curator channel below and check out the individual inclusions underneath.

Out Of Addis was compiled after six years of “music digging, road trips, recordings and events, from the northern rocky expanses of Tigray to the central forested highlands of Oromia to the western sweltering grasslands of Gambell," the labels state.

The songs in the compilation are tied together by the sounds of the Ethiopian and Eritrean krar, which can be heard locking down rhythms from across the nation throughout the release.The entire process of compiling Out Of Addis was also filmed and released as a documentary, Roaring Abyss.

Get 'Out of Addis' on Amazon here

The afrobeat legend's LPs were each released in an individual vinyl color alongside a new batch of Fela material also includes test pressings, limited edition t-shirts, screen prints and posters designed by Lemi Ghariokwu, the graphic designer, illustrator and artist behind 26 of Fela's iconic album covers.

This marked the first time since their original pressing in Nigeria that some these albums became available on vinyl.

Get the Fela Kuti classics here

In 2002 Awesome Tapes From Africa founder Brian Shimkovitz happened upon a cassette copy of Obaa Sima at a roadside stall in Cape Coast, Ghana. In 2006, Shimkovist showcased this cassette gem on his first ever blog post and his readers went wild over the release's infectious & ecstatic dance anthem “Daa Nyinaa." Ata Kak quickly became a cult classic amongst DJs and underground tastemakers.

No one was quite sure who it was exactly that produced the astonishing Obaa Sima, though, so Shimkovist began his search for the elusive Ata Kak.

After spending a considerable amount time traveling, making phone calls and searching endlessly online, Shimkowitz finally tracked down the Ghanaian musician, whose real name is Yaw Atta-Owusu. It was discovered that Atta-Owusu had recorded Obaa Sima in 1994 in Toronto before returning to Ghana in 2006. —Baba Ali

Get 'Obaa Sima' on Amazon here

The name Rim Kwaku Obeng might not ring a bell for even the most devoted funk and afrobeat aficionado. The Ghanaian percussionist's music, which includes a string of groove-inducing tunes recorded in the late '70s and early '80s, has remained relatively unheralded despite its blatant appeal in today's retro-tinged musical climate.

The multi-instrumentalist began his career as part of Ghana's Uhuru Dance Band. While recording with the band in Los Angeles, he caught the attention of production maestro Quincy Jones who invited the artist to play in his band. A series of setbacks induced by threats and lawsuits from a fellow bandmate led to a sorely missed opportunity and soon Obeng's band abandoned him in LA, leaving him stranded and resourceless for 6 months.

The musician's break finally came when he was given the opportunity to record his debut album in San Fransisco. Rim Arrives is a dance-worthy blend of funk, disco and afrobeat hoisted by catchy call-and-response lyrics, reminiscent of Fela Kuti's trademarked sound. —Damola Durosomo

Get 'Rim Arrives' on Amazon here

Touré's 30 year-long career began in the late 1950s in Dakar as part of the Senegalese collective known as Le Star Band de Dakar. Touré and the band enjoyed rapid success and became prominent figures in Senegal's booming, Cuban-influenced son montuno and pachanga scenes in the '60s.

The singer-percussionist later went on to form his own band Black and White based out of Cameroon, where he further refined his unique take on Cuban music by fusing spirited, West African mandingue sounds with brass-filled Latin instrumentation — solidifying his status as a pioneer of Afro-Cuban music. —DD

London-based label Strut Records continue their 'Next Stop Soweto' series with Next Stop Soweto 4: Zulu Rock, Afro-Disco, & Mbaqanga 1975-1985. According to Strut, this era of South Africa's musical history saw such genres as funk and soul being played by bands even as apartheid firmly gripped the country's music culture. It was a time in which energetic American bands like War and Yes, along with SA's own malombo type of music, spurred homegrown groups like Kabana and Harari to incorporate soul and rock into their sound along with Zulu lyrics.

Even though South African music was burgeoning in these years, there were parallel difficulties. Bands would still perform, for instance, but curfews, along with their songs receiving little airplay, made it very hard for these groups to survive professionally. By the 1990s, though, the music of this period paved the way for SA acts like Ladysmith Black Mambazo gaining international popularity. —Z Weg

Get 'Next Stop Soweto 4' on Amazon here

Funk, rock and psychedelia had a strong footing in early 1970s Nigeria. Though less popular than Fela's afrobeat, a large number of rock groups formed out of the ashes of the Nigerian Civil War to create some exceptional, footwork-friendly tracks.

34 of these vintage Nigerian tracks, written and played by often forgotten bands and songwriters, are compiled in Wake Up You! from Now-Again Records.

Wake Up You! is presented as a tribute to the many bands that formed this relatively unknown 1970s Nigerian psychedelic circle. It plays like the best dance track you could imagine and includes tracks from Ify Jerry Krusade, The Hygrades, The Hykkers, Waves, The Funkees, Theodore Nemy and many more.

The two volume release also comes with “two 100+ page books full of never-seen photos and the story of the best Nigerian rock bands told in vivid detail by musicologist and researcher Uchenna Ikonne (Who Is William Onyeabor?)" the label explains.

Get 'Wake Up You! The Rise & Fall Of Nigerian Rock' on Amazon here

Before Thomas Sankara, Burkina Faso was The Republic of Upper Volta. During a period of cultural revolution in the '60s and '70s, the nation witnessed an explosion of new bands and sounds across its large cities.

Centered around the cultural capital of Bobo-Dioulasso, the new compilation Bobo Yéyé: Belle Époque in Upper Volta rounds up several rare and spell-binding tracks from the notable names of the era like Volta Jazz, Dafra Star, Echo Del Africa, and Les Imbattables Léopards.

Bobo Yéyé: Belle Époque in Upper Volta is available as a 3-disc, 37-song box set by archival label Numero Group. It also features a hardcover book of photographer Sory Sanlé's striking and intimate documentation of the faces and the scene of 1970s Bobo-Dioulasso.

9. 'The Cosmic Sound of Cabo Verde'

Space Echo - The Mystery Behind The Cosmic Sound of Cabo Verde Finally Revealed presents some of the earliest electronic recordings from the island nation, reviving its eclectic musical past with trance-inducing songs that combine elements of funk, soul and techno.

The 15-track selection highlights a golden period in the nation's music scene, when the use of synthesizers was first introduced, redefining previously existing styles like morna and funaná—a genre that was charged with being “too sexy" and hence banned under Portuguese colonial rule.

"Musical genius Paulino Vieira, who by the end of the 70s would become the country's most important music arranger, [recorded] eight out of the fifteen songs presented in this compilation with the backing of [his] band Voz de Cabo Verde," the label mentions. As a band leader and keyboardist, Vieira became "the mastermind behind the creation and promulgation of what is known today as 'The Cosmic Sound of Cabo Verde'." —DD

Get 'The Cosmic Sound of Cabo Verde' on Amazon here