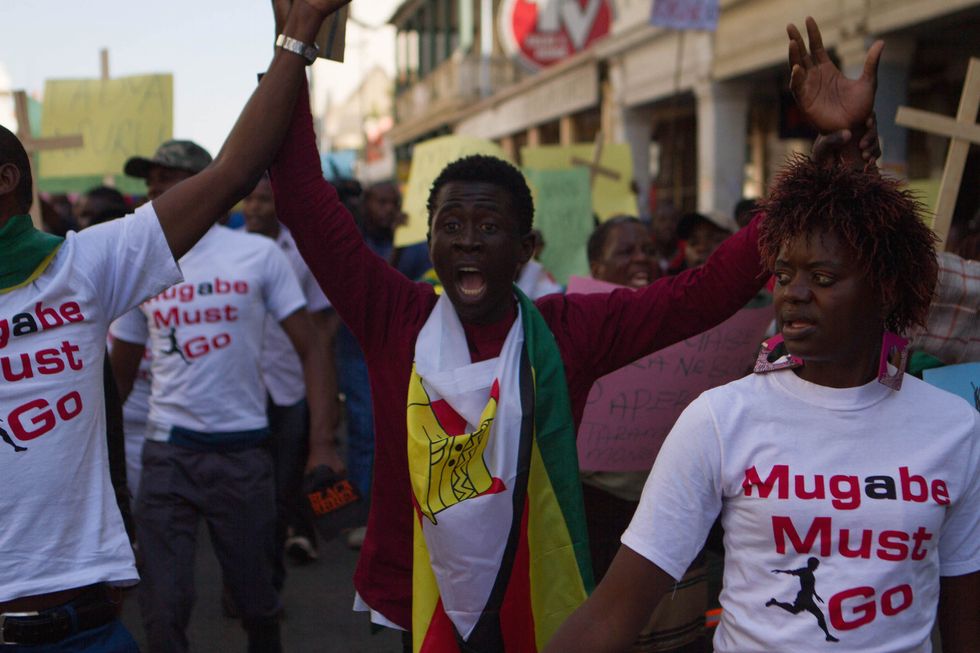 Recent weeks have seen a sharp increase of attacks against journalists in Zimbabwe.

Journalists in Zimbabwe say the art of newsgathering and writing is now a high-risk profession, following the recent attacks of media practitioners by police in the capital Harare during protests against bond notes.

At least five accredited journalists sustained serious injuries from assault by anti-riot police. The wanton police aggression and brutality against journalists on this unfortunate day brings the total number of legally accredited media practitioners who have been assaulted, arrested or harassed in any form by police to 26 in the past two months alone, says the Media Alliance of Zimbabwe (MAZ).

According to MAZ, a media support organisation comprising of all media associations, the past two months have seen a sharp increase of attacks against journalists in the country.

“Between June and August 2016 alone, we have already recorded several incidences of wanton police aggression and brutality against journalists,” a statement by Media Alliance of Zimbabwe stated.

On June 25, Harare police detained five journalists as they were covering a news event at a local hotel where protesters demanded Vice President Phelekezela Mphoko leaves a hotel room he was occupying using state funds.

Prior to this event police assaulted two journalists while on assignment in Harare.

A few days later on the 5th of July, a number of journalists were arrested in one of the townships in the capital, again during the course of their journalistic work.

“Worrying in some instances police have damaged or confiscated various tools of the trade used by journalists, some of which are yet to be recovered. It is also instructive to note that of all the above-mentioned cases, no journalists were charged,” MAZ complained.

“Your Excellency, we are writing this letter to implore you to intervene and stop the harassment of journalists, as a constitutional democracy, we believe those who violate the constitution such as the riotous police should be brought to book,” journalists said on Friday.

Attacks on journalists continue to increase although Section 61 of the Constitution categorically provides for media freedom, which includes the right to seek, receive and communicate information.

In the same breath, journalists complain of restrictive laws such as the Access to Information and Protection of Privacy Act (AIPPA), Criminal Law and Codification Act, Public Order and Security Act (POSA).

Under AIPPA government departments and ministries have up to 90 days to respond to issues under investigations and all media practitioners intending to operate in the country require accreditation, failure of which the courts can jail those found guilty.

On the other hand, POSA restricts citizens to assemble freely, as called for by the Constitution, and must inform police if any protest or gathering is to take place.

Under POSA, journalists may also be arrested if found covering illegal gatherings or protests despite being legally accredited to operate in the country. Discretion lies with the police officers.

Even during gatherings and protests already sanctioned by the courts and police, journalists are at the mercy of the police.

Journalists are required to register with the government entity Zimbabwe Media Commission annually. Failure to do so could result in imprisonment.

In 2015, Patrick Chitongo, a freelance journalist based in Chiredzi, nearly 400 kilometers southeast of the capital, was sentenced to one-year imprisonment for publishing an unregistered newspaper.

Under the same AIPPA law, the government banned The Daily News and its sister paper, The Daily News on Sunday, in September 2003. Another newspaper, The Tribune, was also forced to close for failing to abide by the said law.

Although AIPPA was enacted in 2002, journalists have always been finding it difficult to operate in the country. One such example is the 1999 arrest of journalists Mark Chavunduka and Ray Choto. Chavunduka, the late founding editor of the independent newspaper the Standard, and the Standard's chief writer, Choto, were detained after reporting on disaffection in the military and a possible coup plot against Mugabe’s government.

Although family members denied the facts, the media alleged Chavunduka’s death at 37 was related to the effects of his weeklong detention and torture in 1999. It was reported that before his death Chavunduka had often complained to friends and colleagues of recurring nightmares of the beatings and electric shocks he received at a military intelligence facility outside Harare.

Meanwhile Zimbabwe’s media remain highly polarized partly because President Mugabe and his ruling ZANU PF accuse private media of being a "mouthpiece" for the opposition and the west.

“President Mugabe taught us that the private media was bad. As a result journalists working for these publications have always been attacked. I think you heard Mugabe say he owns the police force,” former ZANU PF youth Godfrey Tsenengamu revealed in Harare this week.