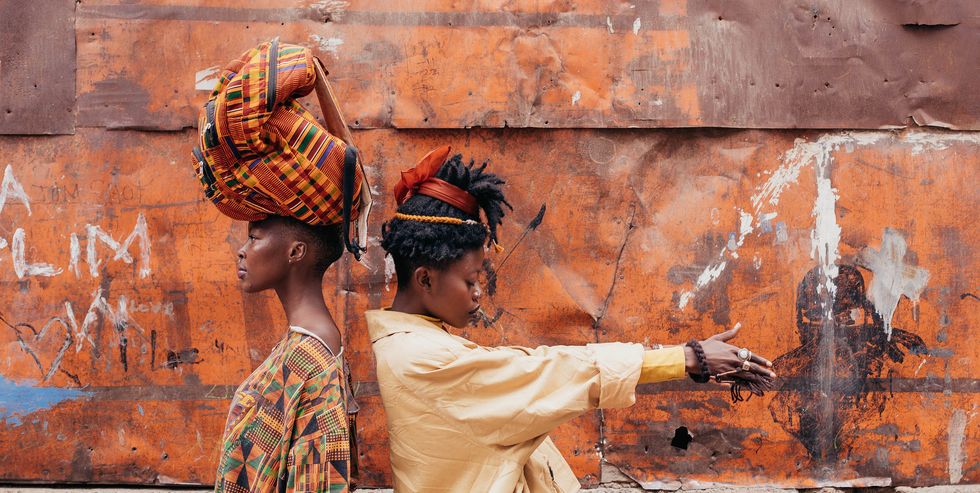 Okayafrica's May 2016 guide to art in New York City.

Frieze New York, the city’s second big week of art fairs, is officially underway, and with it a wave of phenomenal satellite offerings. Most notably is the return of 1:54 NY, the U.S. edition of Europe’s largest contemporary African art fair. Below, we round up eight must-see African-related visual art events and exhibitions to check out this month in New York City.

Koyo Kouoh, Artistic Director of the Dakar-based RAW Material Company, has once again curated a series of lectures and panel discussions as part of 1:54’s Forum program.

Okayafrica’s own Ginny Suss and Antoinette Isama actually just spoke on the "Media Platforms for the Promotion of the Arts, Visual Cultures, and Social Experiences of and about Africa and the Diaspora" panel earlier today alongside TRUEAfrica's Claude Grunitzky and the panel's host, Ugochukwu-Smooth C. Nzewi.

1:54 NY runs Friday May 6 through Sunday May 8 at Pioneer Works in Red Hook, Brooklyn.

Nataal and Red Hook Labs are teaming up this month to spotlight the work of six emerging and internationally recognized photographers from throughout Africa and the Diaspora: Atong Atem, Delphine Diaw Diallo, Kristin-Lee Moolman, Lakin Ogunbanwo, Namsa Leuba and Owise Abuzaid. The exhibition, which includes documentary, fashion and portrait photography, explores “multiple themes that challenge accepted notions of belonging and identity; the everyday and the fantastical; the past and the future; the public and the private.”

Nataal: New African Photography runs May 7 through May 15 at Red Hook Labs in Red Hook, Brooklyn.

Disguise: Masks and Global African Art, which first ran last summer at the Seattle Art Museum, connects the work of 25 artists from across Africa and the Diaspora who have reinterpreted the notion of traditional disguise. Together, their art explores themes of “race, women’s agency, queerness, the exoticization and eroticization of the ‘other,’ governmental corruption and the limits of empathetic understanding.”

Disguise: Masks and Global African Art is on view April 29 through September 18 at the Brooklyn Museum.

Brooklyn-based, Nigerian-born visual artist and musician Laolu Senbanjo is having a breakout year. In March he was selected as one of Nike’s 2016 Masters of Air, and more recently he received the holy grail of co-signs from Queen B herself.

On Monday Senbanjo will appear at Brooklyn’s MoCADA for a special evening dedicated to his Sacred Art of the Ori. The event includes a Q&A in which the artist will discuss his artwork and working with Beyoncé on her recent Lemonade visual album.

and his role in Beyoncé's Lemonade on Monday, May 9, 7-9PM at MoCADA.

The Bronx River Art Center (BRAC) is hosting the second in a two-part series presented in association with The Bronx Council on the Arts' Bronx: Africa programming. Africa: In Fashion & Fabric, curated by Christie Gonzalez and Gail Nathan, shines a spotlight on fashion design and fashion photography from the continent, presenting the work of several contemporary African fashion designers and artists, including Jojo Abot and her AFRI-NA-LADI collective, Archel Bernard & The Bombchel Factory and Victoria Udondian.

Africa: In Fashion & Fabric is on view at the Bronx River Art Center May 6 through June 4.

The multi-disciplinary group show, a curatorial debut for Brooklyn-based curator and anthropologist Niama Safia Sandy, features photography, video installations, paintings and collages that explore “magical blackness” through the past and future of the Black Diaspora.

“The show looks at this idea of magical realism as well as afrofuturism combined across the Black diaspora,” Sandy previously told Okayafrica. “What are the things that connect us? What is the iconography that connects us? And how does that look visually? What does that sound like? What does that feel like?”

Black Magic: AfroPasts/AfroFutures is on view at Brooklyn's Corridor Gallery now through May 22.

The artwork featured in Outside The Box in Long Island City was originally intended to appear in the first-ever Nigerian Pavilion at the Venice Biennale. The “Box” in this case represents “multiple forces and pressures that restrict the creativity of many Nigerian artists today; elements such as the nation, identity, traditional canons, artistic conventions and the shadow of Africanness.” The exhibition, curated by art historian, artist and critic Aguelike Huckoka, brings together the work of four Nigerian visual artists whose approach to art making “intentionally questions and critiques the meanings and forms behind these often-oppressive forces.”

Outside The Box runs April 24 through May 16 at Fisher Landau Center for Art in Long Island City.

Kenyan visual artist Tahir Karmali follows up his breathtaking Jua Kali exhibition with a new solo show at the Brooklyn College Library. Value presents a series of portraits of Nairobi’s Male Sex Workers (MSW) with their most valuable possessions.

“What the exhibit looks to do is question your perceptions of value and perceptions of this idea of being a sex worker,” Karmali previously told Okayafrica. “What does it mean to be a sex worker and more so this idea of men being sex workers and the African perception or the Kenyan perception of what men should be doing, what [they] should not be doing. Should they be sexualized, should they not be sexualized and so on. It also has these undercurrents of questioning homosexuality. And also having people relate to them by seeing what their most valuable possession is. What do they value the most and how is that different from what you value? How is that different from anybody else in the world really?”

Value is on view April 30 through September 2016 at the Brooklyn College Library.