African Creature On How Radical Self-Confidence Made Her the Hairstylist For Beyoncé, Solange and More 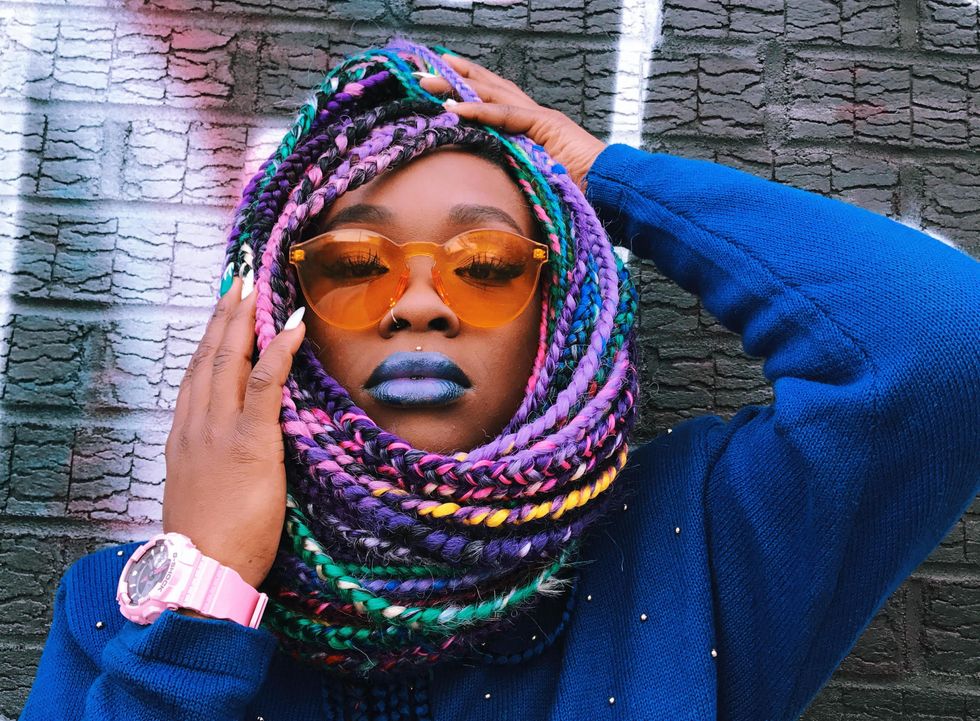 Brooklyn-based, Nigerian hairdresser, Susy Oludele shares her journey to success, and tells us why self-confidence is key to everything she does.

Five years ago the hairdresser also known as African Creature, Susy Oludele, was in her living room watching the video for Beyoncé's song, “Party," which features her sister, Solange, with a head of standout braids.

“Whoa, she got braids and she's in Brooklyn. Why didn't I do those braids?" Oludele thought to herself. “I'm going to do her braids one day, and I'm going to do them better." And then like most thoughts, she let it slip away. Two months later, around Thanksgiving, Oludele got an email, that read “Hey, Solange wants you to do her hair."

Oludule ignored it out of disbelief.

“I wake up in the morning," she remembers, “and there's another email that says 'Hey, so, do you want to do it or not."' I was like wow, this person is really serious. So, I started doing her hair. Then, I did Zoe Kravitz's hair, then Lala Anthony's, and then Beyoncé's."

Shinning, Shinning yeahhhhhhhhhhhh !! I'm not allowed to sleep in my bed until 10pm so no lazy days. #selfmotivate #pushyourself #boxbraids #hairbysusy #braids
A post shared by Purple Power Ranger (@africancreature) on Mar 29, 2017 at 6:34am PDT

The fact that Oludele's clientele list consists of top celebrities becomes unsurprising after seeing her work. From neon-laced box-braids, to meticulously seamed faux locs, Oludele's skills are their own best promoter. Take a scroll through her Instagram feed and irrepressible hair envy will likely ensue.

But, despite being emphatically confident in her abilities from an early age, her path still bore its fair share of bends. Knowing her desired destination, didn't necessarily translate to knowing exactly how to get there.

It's Monday morning when we meet, but Oludele doesn't appear to have even a slight case of the “start of the week blues." She's clad in “all black everything" but her energy colors our hour-long meeting inside her Brooklyn-based hair salon, Hair By Susy. I get the sense that there aren't many moments in the day when Susy isn't contagiously high-spirited. She's been this way for most of her life, she tells me.

“When I was nine years old, I thought to myself, 'I'm gonna be famous, but, I don't want to be famous for just anything, she quips. “I want to give the world something that the world doesn't have already. I want people to see me and know that, 'Oh, that's that girl that made a difference in our generation.' So, I always wanted to be famous with meaning."

The stars are aligning for me... the universe is working in my favor. Speak Positivity on your life, Speak LIFE. Photo @worldclassmars
A post shared by Purple Power Ranger (@africancreature) on Apr 6, 2017 at 9:37am PDT

The 27-year-old hair guru was born in the Bronx to Nigerian parents and lived in four different boroughs growing up. Her cross-cultural upbringing, equipped her with a go-getter mentality. “I'm telling you, being African, honestly, I'm glad. I'm actually glad I had that strength and that strictness in my family because that pushed me to want to do more," she says.

While a strict upbringing can keep some children sheltered and obedient, for Oludele it had the opposite effect. “It really made me lash out," she says. “I was a lash out kid. My parents were just like, 'what are we going to do with you?'"

At age 17 Oludele's parents decided to move to Wisconsin. She told them she was staying put. “I was like, “I got a plan, I don't know how it's gonna work, but I know it's going to be heavy," she remembers. Her solo journey began at McDonald's.

“It was my first job" she says. “I really wanted to work a nine to five position. I felt like, for our generation, having a career or being able to make money, meant having a nine to five, so that's what I aimed for. I knew I wanted something bigger, but I still strived for that nine to five. I ended up working there for not even week, a couple of days. I didn't even get my check."

Living this awesome life thank you to the most high for always sending me that high vibrations. Thank you to @a_kid_named_trav for your awesome energy we must work again & @raisaflowers for the makeup artistry #hairbysusy #africancreature
A post shared by Purple Power Ranger (@africancreature) on Apr 10, 2016 at 2:58pm PDT

Next, was a more fulfilling but equally difficult gig as a home health aid. “I was the youngest employee" Oludele says about the job which lasted two years. “Most people hated that job, because they paid us like eight dollars an hour, but I was so proud of the job because I loved helping people. I loved being around people. I learned a lot from the older people."

When she was eventually laid off, Oludele took that as a sign to go with what she knew. “I cried for like five minutes," she remembers. “I was like, 'Oh my god, what am I gonna do?' Then I was like, 'bing, bing, bing, bing: hair.' I know how to do that naturally."

Her journey towards notability in the hair industry took detours at times, and she speaks openly about the overwhelming sacrifice it required, but one thing that's remained unswerving throughout is her intense drive. She's motivated by both a desire to relate to others, and to maintain an acute sense of self.

Good Morning! Time to get up and get this Money!! I was all out of alignment till I started working on the inside. The inside First then you get your swag on. If you wasn't getting paid for the job you are doing right now would you be still doing the same job? #ootd Blazer & Skirt @susyscloset shoes Zara hair @hairbysusy
A post shared by Purple Power Ranger (@africancreature) on Apr 7, 2017 at 6:00am PDT

“I feel like the most important thing that you have to have is confidence, like being confident in your work. I know that I'm the best. I know because I love people. Some people blow you off and make you wonder why you're doing what you do. But, I love people. I love what I do. Even if you're not a good person, I'm still gonna make sure your hair looks good. You know what I mean? This is what I love to do, at the end of the day. I'm not just doing it to be famous. This is love thing."

As our conversation comes to an end, I ask her if she'd like to share any advice for others on the entrepreneurial come-up. But, it's not simply her advice that she thinks others should take. She implies, that much like her bright eyed, 9-year-old self, all the motivational insight you really need, is already bubbling within.