13 of Our Favorite Books On Black Resistance and Revolution 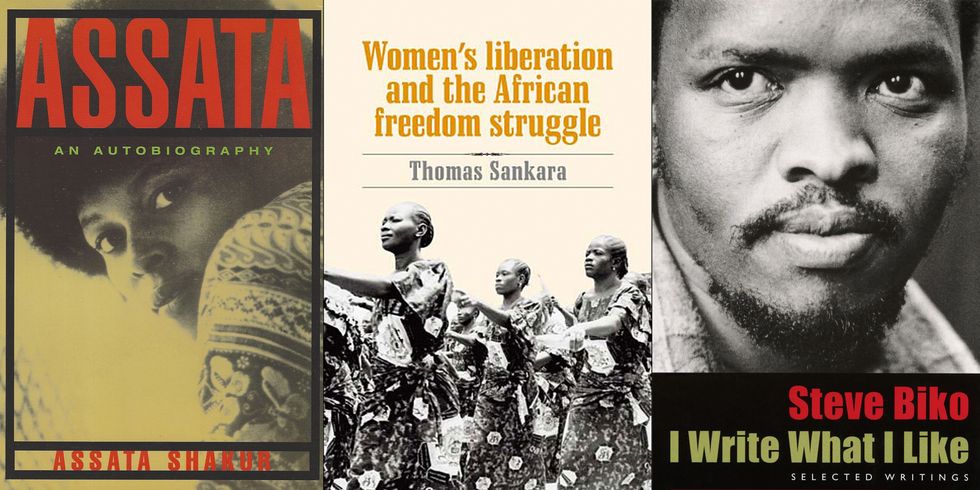 Here are 13 of the most influential books about resistance and revolution by black visionaries.

This month at OkayAfrica, we're celebrating Black revolution—icons and movements throughout history that have fostered revolutionary thinking and encouraged social progress.

Black history is filled with an abundance of brave, era-defining artists, writers, politicians and more who've embodied a spirit of boldness and progressive thinking in the face of adversity. In today's rocky political landscape of hate, misogyny and anti-blackness, these thinker's teachings, words and ideas are invaluable.

There's no shortage of literature form the likes of Malcolm X to Steve Biko, Thomas Sankara and more that continue to spark fire in people and encourage a revolutionary spirit years after they were written.

Below are 13 of our favorite books about black revolution.

1. The Fire Next Time by James Baldwin

The prolific writer's 1963 book, contains two thought-provoking essays: My Dungeon Shook—Letter to my Nephew on the One Hundredth Anniversary of Emancipation, a gut-wrenching address to his young nephew about the perils of back identity in America and a meditation on intergenerational trauma, change and legacy, and Down At The Cross — Letter from a Region of My Mind is an equally poignant piece that chronicles his childhood experiences in Harlem. The essay offers a provocative stance on racial dynamics in America.

This affecting page-turner, reveals the cutting racial dynamics and corrupt criminal justice system that landed the now exiled Black Liberation Army member in prison for life. We follow her journey from her contested murder conviction to her escape to Cuba. Her story highlights the often downplayed role of black women in the fight towards racial equality in the United States.

3. This Bridge Called My Back: Writings by Radical Women of Color edited by Cherrie Moraga and Gloria Anzaldúa

This collection of writings from a diverse group of women scholars, offers critical, essays, analyses and prose that reflects on feminism, race and identity and a range of experiences which impact women of color. It is one of the earliest works to criticize white feminism. Each entry enlightens with personal accounts, and unique perspective that stimulate and resonate with readers.

4. Women's Liberation and the African Freedom Struggle by Thomas Sankara

This transcript of a speech that the late first president of Burkina Faso's 1987 speech at a women's rally, illustrates why he is, even till this day, considered Africa's most progressive leader. In the forward-thinking speech, Sankara authoritatively sends a message of uncompromising gender equality. It's in this speech that he delivered one of his most unforgettable quotes: "there is no true social revolution without the liberation of women." Thirty years later, and his words still ring true.

This compilation of writings form the South African revolutionary, illustrate why he was one of the anti-apartheid movement's most celebrated figures. This book is the fierce leader's retrospective call-to-action, that encourages readers to reframe their state of mind. I Write What I Like, gifted us this famous gem: "The greatest weapon in the hand of the oppressor is the mind of the oppressed."

6. The Autobiography of Malcom XAs Told To Alex Haley

This book is often credited with enlightening many a black college student by providing an explosive introduction to black consciousness. It's the most detailed account of how the icon, born Malcom Little, went on to become the fiercest icon of the Civil Rights Movement, and a leader whose name is virtually synonymous with black resistance.

This book by one of the feminist movement's most celebrated thought leaders, is a dissection of an array of societal issues that plague America including race, class and gender inequality. It's a sweeping analysis that breaks down systemic oppression in a digestible way from one of the legendary scholar and former Black Panther leader.

8. Neo-Colonialism, The Last Stage of Imperialism by Kwame Nkrumah

Upon its release in 1965, this book was so controversial that the US Department of State blocked $25 million in foreign aide to Ghana. In the book, Nkrumah unabashedly lambasted Western governments—particularly the United States—calling out the exploitative nature of their economic presence in Africa, even after several African nations gained their independence. It remains one of the most thorough critiques on the subject of neo-colonialism.

9. Stokely Speaks: From Black Power to Pan-Africanism by Stokley Carmichael

This collection of essays, speeches and articles tracks the evolution of consciousness of the revolutionary Civil Rights hero and the collective conscious of the black community as a whole through three key movements: Civil Rights, Black Power and Pan-Africanism. It's a lesson in the many political efforts that shaped black history in the United States, and a reminder to never stop growing in knowledge and perspective.

10. Re-creating Ourselves by Molara Ogundipe-Leslie

This 1994 book by Nigerian poet, feminist, activist and literary critic Molara Ogundipe-Leslie is a classic feminist work by one of its foremost African authorities. In Re-creating Ourselves, Ogundipe-Leslie, discusses colonialism, sexist traditions, and articulates the plight of black and African women. She has written many significant works on feminism from an African perspective, such as the acclaimed essay "Not Spinning on the Axis of Maleness," published in the book Sisterhood Is Global: The International Women's Movement Anthology. Her work is an example of the importance of black women creating and owning their own narratives.

11. A Long Walk to Freedom by Nelson Mandela

This autobiographical work profiles the South African leader's childhood, activism, and 27 years in prison. The book is an examination of the roots of apartheid told from the perspective of a global icon. It's an inspirational story to say the least, which offers a realistic yet largely optimistic outlook.

This seminal work of literature, written by the trailblazing sociologist, Civil Rights activist and Pan-Africanist, set the foundation for many works on race, class and society which followed. The Souls of Black Folk is largely heralded as the cornerstone of black literature, introducing radical concepts such as double consciousness, the color line and the veil.

This 1938 book by Afro-Trinidadian writer C.L.R. James tells the under-appreciated history of the Haitian Revolution, focusing on the leadership of Toussaint L'Ouverture. This book is significant for obvious reasons, it's a stirring account of how the 'First Black Republic" came to be in the face of adversity and a commentary on the effects of slavery and racism in the Americas.
From Your Site Articles
Related Articles Around the Web
Popular
Culture
spotlight