A Black Woman in Power 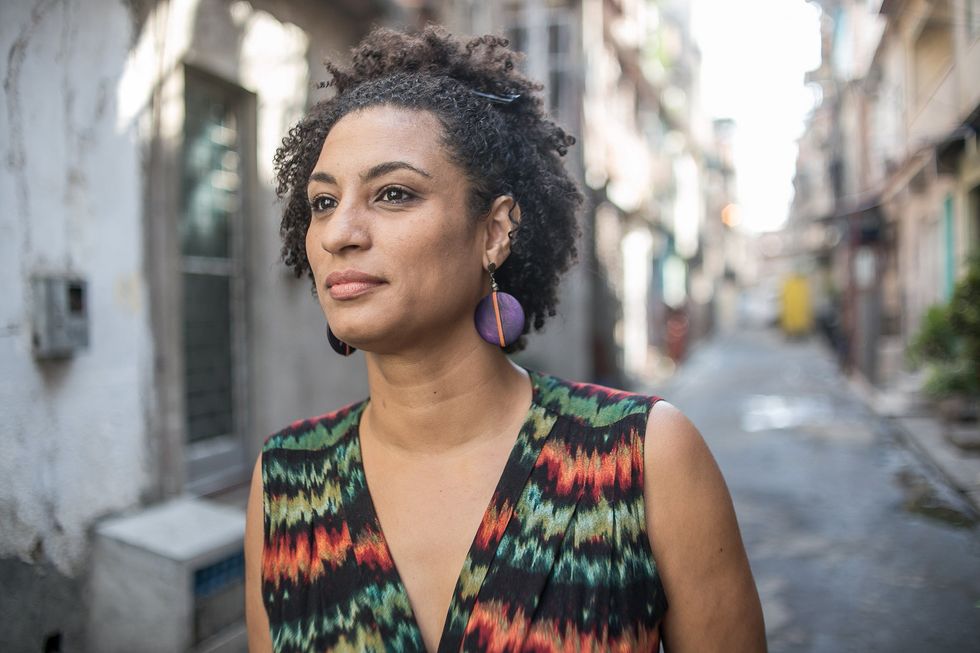 Last week, the charismatic young Afro-Brazilian politician Marielle Francowas assassinated. While motives remain unknown, many fear the beloved Rio de Janeiro councilwoman was targeted for her strong stance against police repression and other injustices. Professor Jaqueline Gomes knew Franco well. Gomes is an Afro-Brazilian trans woman who plans to run for Congress in this year's national elections. She was honored by Franco last year with a special city council award, the Chiquinha Gonzaga medal for her work in human rights and education. Gomes, a professor at a federal institute, became the first black transgender woman to be honored. It was the presence of Franco, a black woman on the city council of Rio de Janeiro, says Gomes, that made it possible for her to receive such an award. Over the next year, she supported Franco in all of her work.

In the interview below, Gomes explains how important Franco was for black women and why Franco was a successful councilwoman in her brief time in politics.

How did you first get to know Marielle Franco politically and personally?

I first connected with Marielle during her campaign. Her campaign really impacted me because she was this black woman from a favela running for the Rio de Janeiro city council. When she won, I knew she was a warrior woman. I thought she was an extraordinary woman who had managed to break the barriers of racism, machismo, and class issues to get to where she was. I met Marielle personally when I was honored with the Chiquinha Gonzaga medal. She and her team were looking for women who had contributed positively to society and culture. My first impression of her was reinforced when I met her during the event.

What were your expectations of her when she became a city councilwoman?

I was sure that she would represent all the excluded groups that are not generally seen by the traditional politicians, who are generally white men, cisgender and hetero. These are men who are rich and they don't know the daily lives of vulnerable people. Marielle comes from the social movement, from the human rights movement. My expectation was that as a politician she would listen to populations who had long been excluded. She did this with a lot of strength, energy and love.

Our readers aren't familiar with the Rio de Janeiro political system. Marielle was a city councilwoman. In this position, how much political power and influence did she have in her neighborhood?

As a councilwoman, she could mobilize to approve laws that she introduced. She helped to pass at least two laws during her mandate. But this isn't the only one can do as a councilperson. She also promoted public debates that brought high visibility to different issues. Through everything that she did, she represented a powerful black woman in power. She had a power that in general black women lack in Brazil.

Brazil is an extremely racist and sexist country. The historic place of women, principally black women, is not in a public space of power. Black women are not in these spaces discussing issues related to power. This concept is embedded in culture and is reflected in social structures. The legislation guarantees women places in political parties but parties rarely prepare women, and especially not black women to run for elected positions. These parties prioritize white men to occupy these spaces of power.

While she was a city councilwoman, two of her laws were approved. She introduced a law whose goal was to stimulate the creation of childbirth hospitals, especially in places with low human development like favelas. She also authored a law to officially recognize the work of mototaxi drivers, who work predominately in favela communities. The childbirth house law very important and has everything to do with her being a feminist. The health system in Brazil is very classist and doesn't consider the demands of women especially those of black women.

There are studies that show that black women receive less anesthesia in giving birth and other surgeries than white women. The law she passed also had to deal with infant mortality, death in childbirth, which affects black and poor women the most. Moto taxis driver is one of the most visible professions in favelas, but until now, the work was never officially recognized. It was an important demand for these professionals to have their work recognized. They obviously work very closely with the needy communities, the favelas. The recognition of their occupation will strengthen their work positions and they will have more security. Marielle always aimed to reflect the community with her laws.

Marielle Franco was one of the most active members of the Rio de Janeiro city council. In her brief time in the council, she introduced the following proposed laws:

What do you think about these proposed laws?

Marielle received demands from people in the community who were concerned about class discrimination issues, black women and the LGBT population. These proposed laws were all important. The day of visibility of the lesbian woman was not approved, and this is very sad. She also cared about state employees who weren't receiving their salaries. So she wanted them to be paid before the mayor and his secretaries.

Just being a councilwoman was Marielle's greatest victory. It's a victory for all of us, all groups that have been historically excluded from spaces of power, to have a black woman represent us in the council chamber

What did you learn from Marielle about being a leader?

I learned a lot about participatory work and how to work with communities that have historically been discriminated against. She invited me to participate in the movement of women in politics. She always cared about the question of representation. Observing her work, I learned a lot about listening to the community and how to work in a very discriminatory atmosphere, while being from a group that was historically discriminated against. To be a politician in this way is to have an open dialogue while remembering that we represent society. This is what Marielle did. This was violated with her assassination but we will follow through with her work so it will not stop.