Why Are We So Obsessed with Making a God of Nelson Mandela? 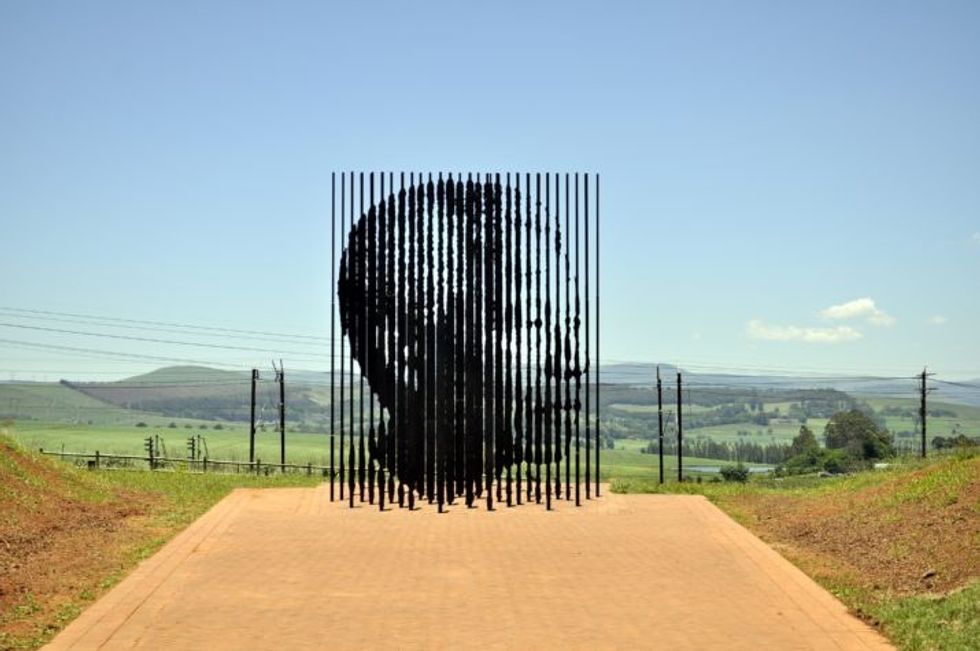 We're keeping his legacy alive in ways the great man-of-the-people would have abhorred.

July 18th is International Mandela Day here in South Africa and this year it marks what would have been the iconic leader, Nelson Mandela's 100th birthday. Celebrations will abound not just at home, but all over the world. None other than former US president Barack Obama will deliver the keynote address at the Nelson Annual Lecture on the 17th of July. And Beyoncé herself announced she is coming to South Africa to play the Global Citizen Festival in December in honour of Nelson Mandela.

Not to be a wet blanket now, but isn't this all a tad much for one man?

I know what you're probably thinking. I am being unnecessarily controversial. I am probably of the emerging opinion that Mandela sold us out as a country during the transition to democracy and that I have no regard for the legacy he worked so hard to leave behind. And you'd be forgiven for thinking that but you'd be quite wrong. I don't believe in writing for the sake of being controversial. The controversy exists already. I'm just noting it. Secondly, I don't believe that Mandela sold us out as a country. Given the political climate at the time, and naive as it may be, I believe he made what he and the rest of the ANC thought was in the best interests of the country. Lastly, as a Mandela-Rhodes Scholar, I am a living beneficiary of part of his legacy and because of that, hold it in high esteem. However, that does not mean I cannot be critical of how we engage that legacy.

In many a conversation with those who knew Mandela while he was still alive, the recurrent sentiment is how humble he was. Forget the fact that he had so much to boast about and to be applauded for, he was a man concerned with the lives of ordinary people and how he could use his position to better them. And so I come to the crux of my argument: Mandela's life was lived in such a way that a long-lasting legacy was inevitable. He was an icon and his memory will live on for centuries to come. However, the way in which many have gone about keeping that legacy alive in recent times has not always been in align with what Mandela himself stood for.

A few years ago the South African government spent millions to put Mandela's face on new money. Given Mandela's nature, he would have certainly preferred that money be spent on other worthwhile, life-changing pursuits. And to be honest, how could a majority black country "appreciate this gesture" when most money, face or no face, remains in the hands of the white minority? In our glorification of his legacy, we continue to make of him a demigod, a man without fault and above reproach. This shows even in the way the homogeneous portrayal of him by the media in stark contrast to Winnie Madikizela-Mandela. Nelson himself insisted he was no saint and yet we insisted that he was. Winnie on the hand never made claim to being a saint and yet we were quick to shout from mountaintops that she wasn't.

It is also important to highlight the kinds of people keen to deify Mandela's legacy. Take for instance, Jacob Zuma and the ANC in general. Without their claim to Mandela and the work he did, they'd have nothing of themselves to stand for. Nothing that would give any South African reason to continuously vote for them. And yet we still do. Then there are the likes of DA leader, Mmusi Maimane, black men who struggle with blackness in and of themselves and invoke Mandela's name as some sort of crutch. Then you have the system of whiteness that finds refuge in Mandela because in him, that system was allowed to live alongside blackness after years of indignity and still hold onto the wealth of the country. And then of course, you have those few who hold onto Mandela because they genuinely believe in what he stood for.

We tend to see Mandela, and problematically so, as the embodiment and yardstick for all suffering in South Africa. When people hear "27 years in prison," they think that's the worst it could have possibly been for any South African during Apartheid. It is not. And this is not to have an Oppression Olympics, but we completely forget, and quite eagerly so, that there were so many other important struggle veterans all of whom were instrumental in Mandela becoming president. Take for instance, the stalwart Albertina Sisulu, this is also the year of her centenary. Where is all the fuss around her? Does she not matter?

There is much talk about what Mandela stood for, many an event, prestigious lecture or fundraiser and yet very little of the doing of what he stood for. There has been a whitewashing of Mandela's name in a sense which has allowed many to do as they please, as contrary as it may be, while spitting out Mandela's name to subvert the conversation from their doings.

And so because many continue to live in that delusion, you can miss me with all the "Mandela's legacy" crap. I'm really not here for it.