Op-Ed: Can Beyoncé Be Problematic? 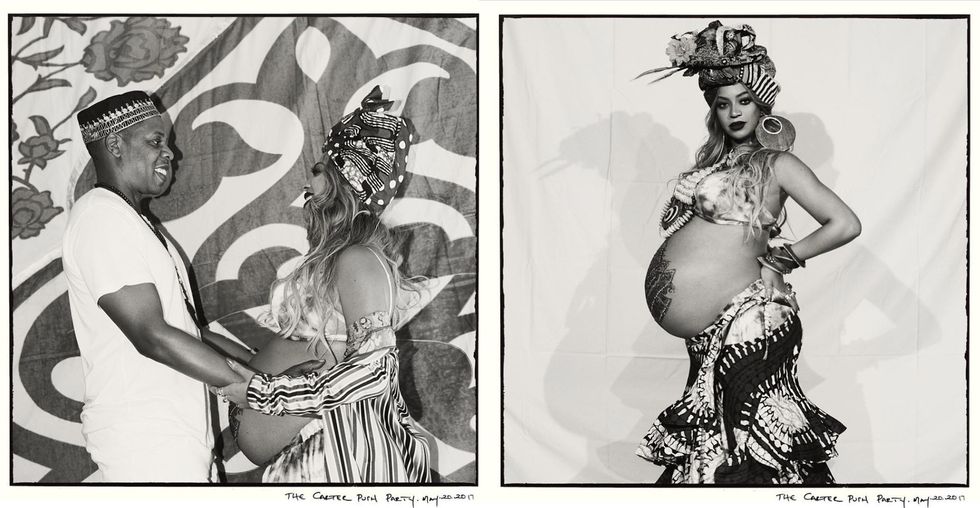 Following Beyoncé's African-themed baby shower, many have been left wondering whether the queen can ever be accused of cultural appropriation. I mean, even if Beyoncé is one of your faves (isn't she everyone's?) she shouldn't be exempt from the scrutiny we heap on everyone else. Surely, even our faves can be problematic sometimes.

Cultural appropriation is not always easy to detect, or avoid, even among the most conscious among us. Get past the overt black-and-white examples of appropriation—privileged person profits of another person's culture while denying that person the ability to do so— and much of the concept sits largely in a blurry grey area of endless subtleties and nuance.

Many of Beyonce's supporters on this front argue that as a black woman and seeing that African culture is essentially black culture, Beyoncé is innocent. But while all African Americans inevitably have roots which can be traced back here to Africa, Africa is not, in fact, a country and I grow weary of having to squash this tired trope.

The African continent has 54 countries, each as different from each other as the colour red is to green. That's a lot of culture to claim in one fell swoop. And so when it comes to the question of cultural appropriation, which country or more specifically, which culture, is Beyoncé paying homage to?

It's a good question but thankfully one which Beyoncé herself seems to have given us the answer to. In 2006, Beyoncé visited Nigeria as part of her Experience Tour. I don't think it's a coincidence that a decade later, she released her revolutionary album "Lemonade" which makes several references to Nigerian culture—Yoruba culture in particular. In her music video Sorry, Beyoncé's dancers were painted in a manner that drew inspiration from Nigerian visual artist Laolu Senbanjo's body paintings, the Sacred Art of the Ori.

The costume that Beyoncé donned for her Lemonade medley performance for the Grammys this year again pay tribute to Nigerian culture, particularly the diaspora imagery of the Yoruba goddess of fertility and love Oshun and the West-African Mami Wata. Beyoncé is also purported to have compiled a 20-track album (before her fourth studio album) which was inspired by the legendary Nigerian musician, Fela Kuti. Although it was not released, we were afforded a sneak peak of sorts in the afrobeat-influenced 'End of Time' track which was quintessentially Fela-inspired.

We would like to share our love and happiness. We have been blessed two times over. We are incredibly grateful that our family will be growing by two, and we thank you for your well wishes. - The Carters
A post shared by Beyoncé (@beyonce) on Feb 1, 2017 at 10:39am PST

And beyond Beyoncé's connections to Nigeria she has also obtained creative direction from African creatives of many background with Ethiopian photographer Awol Erizku being the most recent. And while references to 'Africa' have become popular among western artists in recent years, considering the personal value that Lemonade holds for Beyoncé and the wealth of connections to various African cultures, I don't think that her West-African themed baby shower complete with Fela Kuti's Lady playing in the background (no surprise there) is an example of bad cultural appropriation. It seems like an homage from someone attempting to honestly connect with her roots.

I do feel however, that Beyoncé has in the past been problematic in a way that does call into question the authenticity of her apparent devotion to 'Africa'. The same 2006 Experience Tour in Nigeria occurred amidst reports that President Goodluck Jonathan had paid the star $1 million initially set aside for a fund geared towards curbing poverty in the country. Now, whether Beyoncé herself was aware of this remains unknown but it is troubling nonetheless.

In addition, Beyoncé also performed for the late Libyan dictator Muammar el-Gaddafi and members of his family back in 2010, again, amidst much controversy. Now, this is not to say that she is the only artist to ever perform for authoritarian rulers or in countries that are sites of gross human rights violation –she isn't. But we also can't ignore the fact that not many of the other artists have continued to obtain so much artistic direction from 'Africa' in quite the way that Beyoncé has and therein lies the rub.

And this is not to say in any way that she needs to be 'political' in any sense, but the lack of commentary on her part in response to any of these controversies leaves a slightly bitter taste in my mouth. Does her reverence of 'Africa' merely extend to its art, culture and spirituality in so far as it benefits her both personally and professionally whilst divorcing these concepts from the actual well-being of African people themselves?

All I can do is speculate on my part, tentatively hoping that Queen Bey has this public discussion one day. But all-in-all, this conversation is worth having because as I said before, even our faves can be problematic.