Photos: Nigerians Go All Out To Stand Up For LGBT Rights 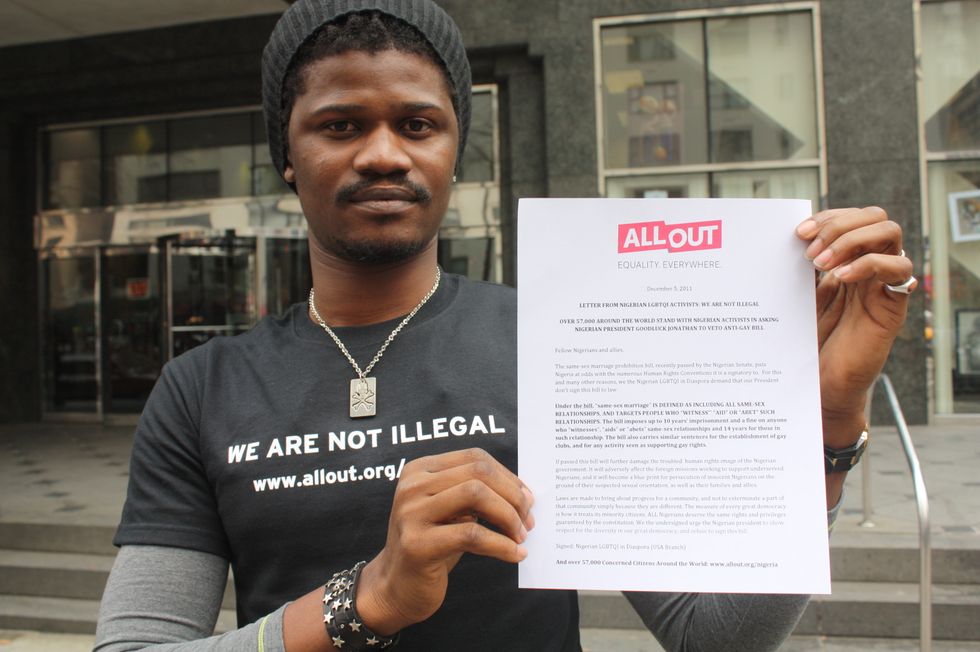 Recently a bill was passed by the Nigerian Senate that would make it a punishable offense — of up to 14-years in prison — for anybody to go to a gay bar, to work for or be involved with LGBT organization, or to be in an openly gay relationship. In addition, anyone who  “witnesses,” “aids,” or “abets” same-sex marriage — defined as including ALL same-sex relationships — could be punished up to ten years in prison. The bill also carries similar sentences for the establishment of gay clubs, and for any activity seen as supporting gay rights.

On Monday Dec. 5th, activists rallied outside of the Nigerian Mission to the United Nations (pics below) to deliver a clear message to Nigerian president Goodluck Jonathan: "We are not illegal." Nigerian activist Ifeanyi Orazulike wrote a letter to Jonathan and circulated it via AllOut.org urging him to veto the bill. The petition garnered over 58,000 signatures from around the world in just three days and activists hand-delivered the letter to consular officials on Monday.

On Tuesday, President Obama and the U.S. State Department announced that it will limit aid to countries that don't embrace gay rights (despite a bevy of unjust legislation in parts of the United States including limits on gay marriage and equal opportunity housing....erm...). This announcement comes on the heels of UK Prime Minister David Cameronmaking a similar statement - albeit in a pretty f'ing patronizing way. Critics of Cameron's initiative note that Cameron didn't consult with activists on the ground and that his statements/actions would actually endanger the lives of Africans. We don't disagree, but we also see how divestment has curbed human rights abuses in the past — economic sanctions against Apartheid in the 1980's/90's is a prime example.

To help support gay rights activists on the ground, and specifically in Nigeria, go to  All Out's website where you can tweet, Facebook and email about the Nigerian anti-gay law. And sign the petition.The goal is to keep the pressure on the President Goodluck Jonathan and get him to veto the bill.