Ray BLK, the 'Sound of 2017,' Speaks About Black British Womanhood and Calling Out Homophobia 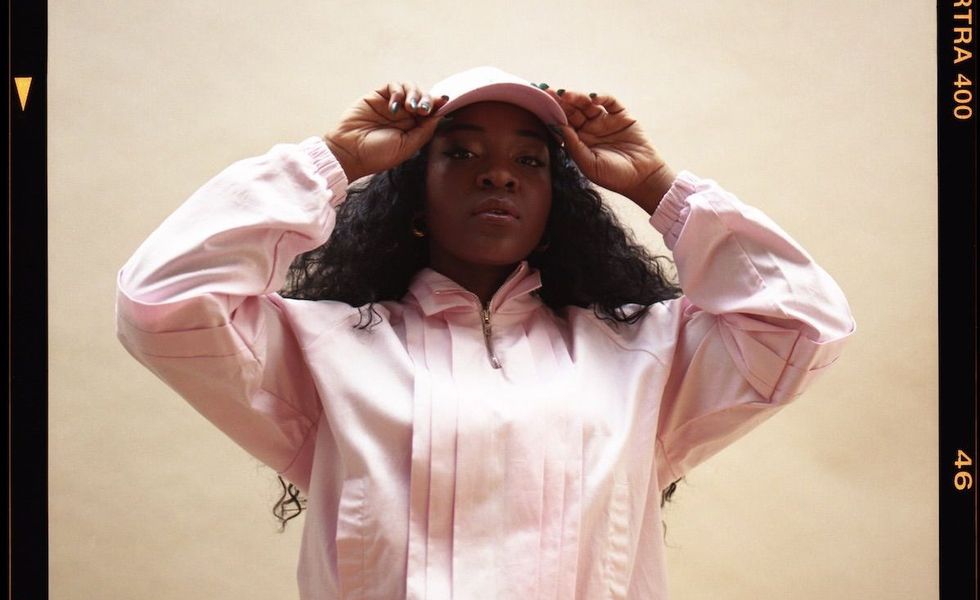 Ray BLK opens up about her British-Nigerian background and the influences of South London on her music.

South London artist Rita Ekwere, better known as Ray BLK, is using her talents to express her truth and inspire a generation to push boundaries.

As the first ever-independent artist to win BBC Music’s Sound of 2017 poll, Ray is setting the tone for a great year ahead. Her unique, powerful sound and overall message is shaping a new wave for U.K. artists.

Born in Nigeria, Ray moved to London at the age of four. Her music takes inspiration from that dual identity, which allows her to celebrate both her Nigerian heritage and British upbringing.

Ray BLK's songs explore personal relationships, the opportunities and limitations that exist growing up in South London, and how she overcame by staying true to herself and her vision.

Beyond using music as a way to tell her story, Ray's also utilizing her platform to discuss major social topics like black womanhood, homosexuality and, even, teenage pregnancy.

Durt, her debut EP, features a number of songs that take influence from soul, hip-hop and '90s R&B. Her single’s “My Hood” with Stormzy, “50/50,” and the SG Lewis-produced “Chill Out” have made big splashes on UK radio and attracted some of the industries most noteworthy figures.

Below, we talk with Ray about inspirations, growing up in south London and some her favorite African artists.

What inspired you to get into music?

I was always involved in it from a really young age—from being in gospel choirs at school to being in the adult choir at church, I always was involved in singing. Also, watching a lot of music video channels was my hobby when I'd come back home from school, between the ages of seven and sixteen. Music was something that was always within me.

How has South London shaped you?

I think South London culture is probably one of the biggest aspects of my life that inspired me to get into music. Growing up in school, everyone used to make music for fun and for our own entertainment because there wasn't much else to do.

In the playground at school and lunchtime, everyone would huddle up and the boys would rap and freestyle. I used to really love grime when I was a teenager and I would listen to pirate radio so I'd say that's a big part of London culture that has influenced me as well.

Listening to grime when I was really young made me want to rap myself, so I used to write raps before I actually started writing songs. Growing up in that kind of raw music culture has really influenced me musically and as an individual.

What role does your Nigerian heritage play in your music?

I feel like my upbringing has definitely influenced my music, just purely because I come from a very musical family and the music that was played in my house was either gospel music or Nigerian artists like Fela. I grew up listening to that and feel like those sounds also influence my music. I hope to make Nigerian music in the future with my own unique approach.

Your music video for "Chill Out" addresses the issue of homophobia within Caribbean communities. This is also a big issue amongst African communities. Why was this an important topic for you to address?

I feel like homosexuality is a topic that the black community tries to shy away from. We don't really like to talk about it and we often pretend that there are no gay black people that exist. I felt like it was something that I needed to put a spotlight on.

Even in Nigerian culture, I think we speak about it a lot less. We don't talk about anything like that in our musicm whereas in Caribbean music, they speak against homosexuality all the time but we kind of just pretend it doesn't exist. I felt like it was something that someone needed to speak up about and I didn’t want to wait for someone else to address it.

Who are some African artists that have inspired you?

Honestly, I've been really inspired by Wizkid's career so far and how he's gone from being an artist that originally catered to a Nigerian audience to being a cross-over artist with a worldwide audience.

I think that's been because no matter who he makes a song with or what song he makes, it celebrates Nigerian culture. I think people actually take to that. The more you celebrate yourself, the more people see how cool it is, and I feel like the rest of the world has really recognized that. I really admire his career and how he's managed to stay true to himself.

For our parents' generation that grew up in Nigeria and got their foundation there, it's easier for them to be proud of their Nigerian roots, but as the diaspora and expats we have to learn to love our roots. How do you think you have done that?

You know what the thing is for me? I always say that I feel like I'm a hybrid. I'm very much a London girl, but I'm also very much a Nigerian girl. Growing up at home my mum would say, "When you leave this house and you go to school you're in England, but when we're inside this house, this is Nigeria."

We live under Nigerian laws in that house and I think, for me, I'm really still routed in my upbringing so I still have those Nigerian values that I think will follow me for the rest of my life because it is who I am and it's how I've been brought up. I don't think I can really ever escape from it to be honest.

What was the experience like working with Stormzy and are there any artist of African heritage that you want to collaborate with in the future?

I really loved working with Stormzy because it was such an organic process. When I finished the song, before he was on it, I felt like it was incomplete and I really wanted to get him on it.

As soon as he did a verse on it, I felt like the song was finally ready to be put out. He's just such a pleasure to work with and is just such an incredibly talented guy. To be honest, he's one of the artists in the UK right now that really inspires me in terms of how he is as an individual and how he's followed his own path without having any influence from major labels.

I look forward to doing more collaborations and learning from other people because I'm always looking forward to learning more. I don’t have anyone specific in my mind right now but I definitely would like to collaborate with more artists from the U.K., from Nigeria, from America, all over the place.

Your music often addresses black womanhood, reminiscent of Lauryn Hill's soulful and raw approach. What is the most important message you want to send through your songs?

It's funny because people always say this and they ask me if that's always been my goal, and if it's a thought out process, but I sing and write songs about my experiences and about who I am. I am a black woman and so I feel like the stories that I tell speak to black women even more so.

For me, the message I've always wanted to put out for women in general and for black women who listen to my music is really just to love themselves and to stay strong. I think self-love is one of the most important things and once you learn how to love yourself then you know how you should be loved. I feel like that's an important message, especially for young women these days.

What advice would you give to your younger self about pursuing music?

I would tell my younger self not to be in a rush. I've only professionally been in the music business for about a year and a half. Behind the scenes I've been singing, writing and trying to get into the music industry for a lot longer.

I've been writing songs since I was seven but I've been trying to break into the music industry since I was about 13. I was making songs with my friends, doing small performances locally and auditions. I feel like from that age up until now, I was always in a rush to be out there and to finally be noticed so that I could actually start making music as a job. I've learned that everything happens at the right time.

Timing has been everything in my journey so far, so I would just tell myself to relax and focus on being a better artist and perfecting my craft.

Can we expect any new projects from you in the future?

I'm always in the studio making new songs so that I'm ready for my next project. I'm excited for when it will be done but I don't know when that will be. However, there will certainly be something coming from me at some point this year. Stay tuned.