100 Women: Uzo Aduba Wants to Use Her Roles to Give a Voice to the Voiceless 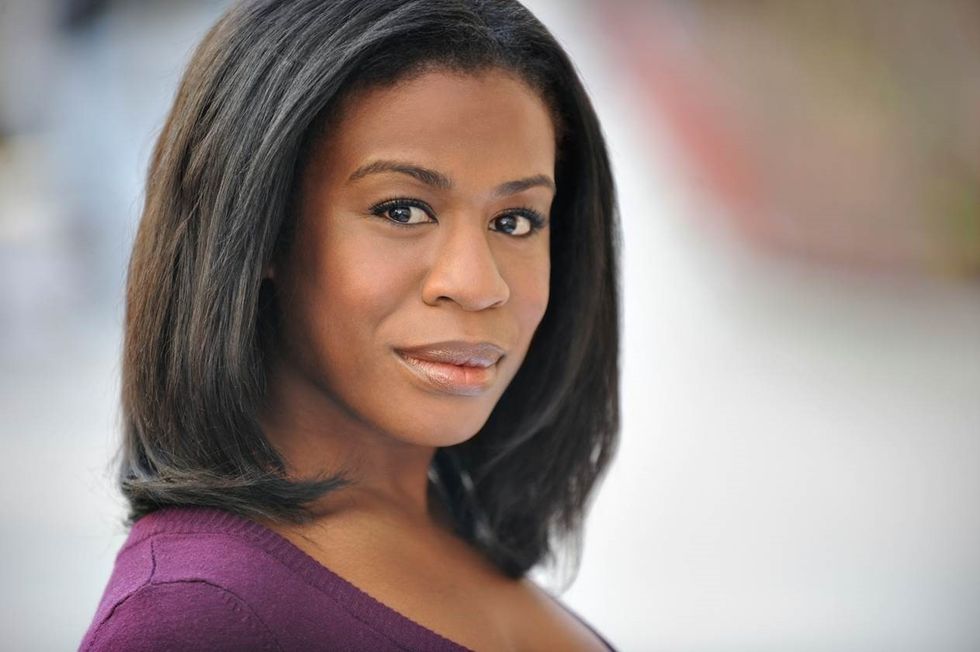 We talk to the Emmy-winning standout of Orange is the New Black on how to be good, just as you are.

As a child Uzoamaka Aduba was insecure about a great many things. Her name and the now-famous gap in her teeth were among the number. "My mom would try to impress upon me constantly, 'Don't you know that in Nigeria, a gap is a sign of beauty? It's a sign of intelligence.' I'm like, 'We don't live in Nigeria, mom. We live in Medfield, Massachusetts.'" Thirty-seven-year-old Aduba is quite the opposite—dramatically, if you will. Currently chatting from a mountainside village in Mendoza, Argentina, she exudes total self-possession, and is crystal clear on not just her beauty and her talent, but on what she stands for ("Equality for all. Full stop.") and even her privilege.

"Whatever I think is hard is nowhere near what hard is. First solid lesson. Anything that I considered to be difficult, I don't have to reach that far back into my history and to my community stories to know what hard really looked like," the Nigerian-American actress states in a definitive tone. "Hard is moving to a country where you know no one and have five children. Hard is surviving a civil war. Hard is surviving polio. Hard is learning how to blend into a new culture without losing your own. You understand? Me figuring out which of the seven pairs of jeans I want to wear today is not hard."

Granted. Yet, the relative ease of Aduba's life should in no way negate the work she has done in carving out her own path. As a voice major at Boston University who fell in love with acting, she plotted her course before working her ass off. From an eager novice in theater, earning her stripes performing with the Huntington Theatre Company and the American Repertory Theater, and at the Theater for the New City and the Kennedy Center, to making her Broadway debut in 2007 (in "Cora Boy") and then landing a small screen television role five years later (in CBS's "Blue Bloods"), she pressed on.

And her role of Suzanne "Crazy Eyes" Warren on Jenji Kohan's Netflix series Orange is the New Black, while seemingly destined for her, was in no way luck. It was not the part she auditioned for (she originally read for Janae, the track star), and once she signed on for it, it was supposed to only be a two-episode appearance. But the captivating versatility, genius physicality and depth of character that Aduba brought to her performance, cemented her as a formidable talent on the show and in the hearts and minds of viewers and critics alike.

If she had committed to the original plan encouraged by her parents, the world would have another, certainly phenomenal, attorney. And while her Screen Actors Guild Award (for Outstanding Performance by a Female Actor in a Comedy Series), as well as, her 2014 Emmy for Outstanding Guest Actress in a Comedy (and yet another in 2015 for Outstanding Supporting Actress in a Drama Series) are proof that she is on the right track, Aduba was not always so sure.

But where is the tenderness, openness and vulnerability? Where is that version of us?

"The day I got Orange was actually the day I quit acting, and had decided that I should go on and become a lawyer somewhere and sort of take a more traditional route for most Nigerians," Aduba recalls. "I had had my doubts or worried, but I had never quit in my spirit…until I quit that day. Then I wound up getting Orange, and it solidified for me that this is my service, my ministry message. This is what I'm supposed to be doing. Just when I thought I was out, it pulled me back in. No, this is exactly what you are. The feeling you had placed in your heart is correct."

Her passion for acting will be necessary. That is, if she is to build upon, and in some cases help dismantle, the consistently reiterated narratives that are often wrongly assigned to African women. "Strong, hard, takes no nonsense, tough as nails. I know that woman, and I know that ability to walk in that space," Aduba says. "But where is the tenderness, openness and vulnerability? Where is that version of us?" The lack of diverse stories leaves much to do, and with such a wide-open field, Aduba's future plans are slightly ambiguous.

A return to Broadway? Absolutely, that's one of my greatest loves.

Immediate acting goals? Sharpen my craft, always. And find ways to tell the stories of the people missing from the tapestry of the artistic expression, and our history.

For now the Emmy-winning, screen-slaying dynamo is just happy to add to the African creative community that is currently being recognized just a bit more.

"I am proudly African. My Nigerian household was culturally fundamental for the woman that I am today. It feels wonderful to see the positive response to what I do when it is entirely African in and of itself," Aduba explains. "We're living in a season of art, and theater, and music and film, sort of discovering and celebrating what my community is, and that's exciting. Be it with our Black Panther, be it with new African stories being told in the world of theater by women like Ngozi Anyanwu ["The Homecoming Queen," Atlantic Theater], Jocelyn Bioh ["School Girls; or The African Mean Girls," MCC Theater] and Mfoniso Udofia ["The Ufot Cycle" a nine-play series]. Be it with Wizkid and Drake or Afrobeats... I see my community celebrated more than when I first started, but there's still quite a ways to go. I'm excited but I'm cautiously optimistic, because I hope it's not a trend."

The moment threatens to be fleeting. However, according to Aduba, the key to sustained appreciation of, interaction with, and connectivity amongst the cultural innovators and artists of the diaspora is simply empathy. When we understand that we are all connected to the continent, she shares, we can grasp the concept of oneness. "The first time I really had that clearly laid out for me was when I was doing this musical called "Abyssinia" with an all-Black cast. We had a potluck one night. I had never been to New Orleans, and everybody was meant to bring something of their own. And I had two cast members who were both from New Orleans. One was gonna make jambalaya, and one was gonna make gumbo. And I was like, 'What is jambalaya? What is gumbo?'" Aduba laughs, expressing the lower octaves of her classically trained voice. "They were trying to describe it to me, and I couldn't quite visualize it. When they showed me the jambalaya, I was like, 'This is jollof rice.' And anybody who tries to tell you differently is lying. And then they showed me gumbo, and I was like, this is okwulu soup, another dish that we have in Nigeria. I realized, it is all the same, which means we are all connected. And if you can't see that right on our plates, then you don't want to see it."

2018 is already promising for Aduba, and not just because of her sixth season return on OITNB. She is in a good place—physically, at the moment, staring at a gorgeous mountain just off the small village she is visiting, but also mentally. Her resolution? No more making mountains out of molehills. "I started this year declaring, I am everything and I am good. Just as I am. I wake up every morning alive. I can breathe. I don't need, thank God, any medication…We always have our hardships, battles, hurdles. I'm not discounting that, but I'm not gonna add to it with stuff that I should be able to forgive, and love and be grateful for. I spent so many years doing that. I'm good on that. I'm not doing that anymore."

This concludes OkayAfrica's 100 Women 2018—a project highlighting the impactful work done by African women across the globe. Throughout March we have published a series of profiles, videos, interviews and feature stories on these inspirational women.