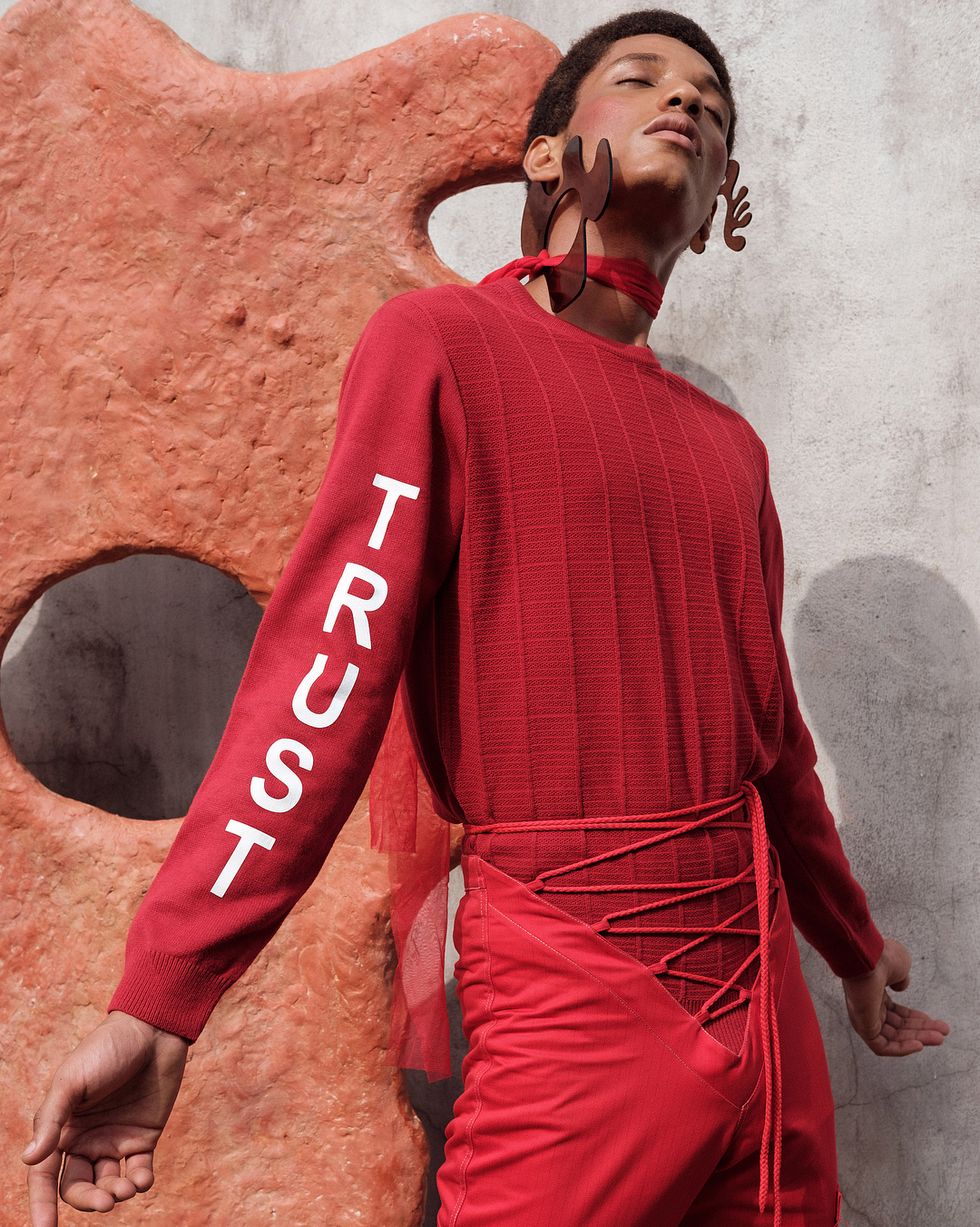 These creatives use fashion to shake up and question the traditions and gender norms that permeate Nigeria.

In America, gender fluidity has moved through fashion into the culture at large. Designers like Eckhaus Latta and Jeremy Scott have proven that the trend is now part of our day-to-day choices. We caught up with five Nigerian creatives—a photographer, blogger, musician, fashion brand, and journalist who are standing together against the oppressive nature of Nigerian culture to learn how they're using their creativity to express gender fluidity.

It seems as though it's much easier for one to express his or her identity in the western world compared to everywhere else. In Nigeria, where traditional, unfortunately, trumps everything, the new generation of millennials are beginning to question why such traditions still exist and how to break free from it. Nigeria has a penchant culture of a hyper-masculinity and hyper-femininity—where both genders cannot exist independent of labels and stereotypes. As of late, young Nigerians have become more interested in fashion, the arts and music. Sartorially, their interests bend and challenge gender norms that they've been accustomed to over time. The women, for example, want to be considered feminine and beautiful without feeling strange about their choices of not wearing bras, lipsticks, makeup or even short hair. Beyond curiosity, these young Nigerians feel excluded from what a man or woman should and cannot be, and they are doing all they can, culturally and socially, to create a safe space where they feel like they can exist.

Lagos-based photographer and art director, Daniel Obasi, considers himself a dream weaver—creating an alternate space where gender fluidity in a contemporary African setting is alright. He captures male subjects in close-up shots, highlighting their prettiness in a feminine and subdued manner. He's not afraid to art direct male models who are wearing earrings, makeup, or even women's clothing. There's a sense of bravery in his work and he confirms it saying, "It's my job as an artist to change the narrative of stereotypes, especially in our community. It's time we start telling our stories the way see fit."

In recent years, he feels that many African designers have opened conversations on gender fluid fashion. He states that the struggle self expression stems from a traditional and religious point of view because Africa is largely both a religious and traditional continent. A typical African society functions on the characteristics each should gender play. From childhood, you are taught your place as a boy or girl and the expectation follows as such. All of these gender restrictions makes it difficult for an average African to accept gender fluid style or aesthetics because the culture itself is vested on how you look or act as an African. Though the creative space is inclusive and open, it's also political which makes it difficult to express or create. There's an unintentional monopoly where everything fashion seems to hover around the same group of people, spaces and elite circles. "We need help to break this," Obasi says in frustration. "We need teachers to educate us on fashion and the process. There's a lot of local resources that are worth spending money on to nurture and develop our ideas but our community doesn't value us to even invest in us."

Style Enthusiast is an androgynous blogger who has been blogging on Tumblr for over 10 years. Her posts have received over 10,000 reblogs and likes per post. The Nigerian native says her style is one of the ways she defies gender normative roles in society, specifically Nigerian culture, has set for her. Her style exemplifies her bravery as she bridges the gap between masculine and girly energy at the same time.

Wearing blazers, mandarin collar shirts, skinny jeans with heels oozing off a boyish swag, she says, "I wear what's comfortable. I'm a tomboy and always will be." People make assumptions about her sexuality, which often is offensive, but it goes to show how little people understand about gender fluidity. "I remember one time a guy asked me if I was going to grow out my hair in the future like I wasn't good enough bald," she says. "It's terrible, Nigerians fail to cope with its own people. We will date everything and seek value in everyone else before we accept and cherish our people. Society struggles with gender fluidity because it makes people uncomfortable. It's unfortunate, but at a very young age, we're taught to stay within our boxes and some listen and others don't. But I still can't let that dictate my life and the way I choose to express myself. I still have to believe in me and do what I think is my duty to society which is to be me in the most carefree way possible."

27-year-old Adebayo Oke-Lawal started the androgynous fashion brand Orange Culture in 2011 as a way to express freedom in his sexuality. As a child, he was told to be a "man" at all cost which left with him no sense of identity growing up. By creating this gender fluid brand, he broke out of the oppressive nature of Nigerian culture. When he launched the brand, he received backlash because people thought it was improper for men to wear bold colors and feminine cuts.

During his presentation at the 2018 A/W Lagos Fashion Week, models wore open-necked shirts with tight shorts, mesh tops, pink eyeshadow, pink short cut suites-all with a feminine touch. Adebayo's mission for the brand is to redefine the conversation around fashion industry. "It seems like a lot of outsiders come in to tell us who we are and how we should be," Oke-Lawal says. "I want to use my brand create a voice for the voiceless. To make a global impact on who we actually are, which is free-spirited, open and androgynous." Oke-Lawal expressed his concern with creating in the Nigerian space, saying he often feels like there's no infrastructure to support the creatives that want to be a part of the fashion industry. "We're all learning as we go," he says. "Because our society doesn't see fashion as a big commodity. Investors don't think we're worth investing in and that hurts more than anything."

Wavy is one of the most creative artists in Lagos. She dabbles in everything from music, fashion, arts, graphic design to photography. Her Instagram beautifully captures her eclecticism; a boyish swag with a gender fluid style.

She describes her style as an expression of her creativity dressing how she feels and that most of the time that's relaxed. "I wear clothing that's loose fitting that allows me to breathe," she says. "I just try to be as comfortable as possible, I like to be free." Wavy thinks the world is starting to catch on to the fashion scene in Nigeria. She thinks brands like Orange Culture are shifting the narrative of what it means to dress feminine or masculine. "Society is stuck between gender roles and fashion because a lot of people are scared of what they don't understand," Wavy adds. "Everything is art. If you can see someone's art; then you can understand that person, it's as simple as that."

A Nasty Boy was created to explore the otherness in fashion, art, people and culture. The Lagos-based publication was founded by 23-year-old Richard Akuson. His inspiration for the publication was to provide a safe space where creatives could share their art and tell their stories.

The Instagram feed and site highlights young creatives that are boldly discussing the lack freedom in their respective communities. "I believe there's a wave of young Nigerians, not necessarily majority, but substantial enough for a platform like this to exist," Aksuon says. "They are open minded and very curious about their society and norms. It's my job to give these people a safe space so they can share their voices." Akuson thinks the style coming out of Lagos has become more free and expressive. "The Lagos cool is definitely a street style look. They're usually sporting fanny packs, colorful hair dyes, rings (lots of it) and eclectic neck pieces. It's very androgynous and open," he adds. "Everyone sort of plays with whatever style they like." Though the youth have found their sense of self through said fashion, the people that hold power have yet to support them in their decisions. Akuson says one of his frustrations with the magazine is finding funding from brands, because the people with power still don't understand the movement. The industry does not support the notion of individualism because it creates a shift in culture, a radical change if you will. But Akuson has hope, because he thinks it's only a matter of time before the old minds die and the new ones rule.