AFRICA IN YOUR EARBUDS #45: LARRY ACHIAMPONG 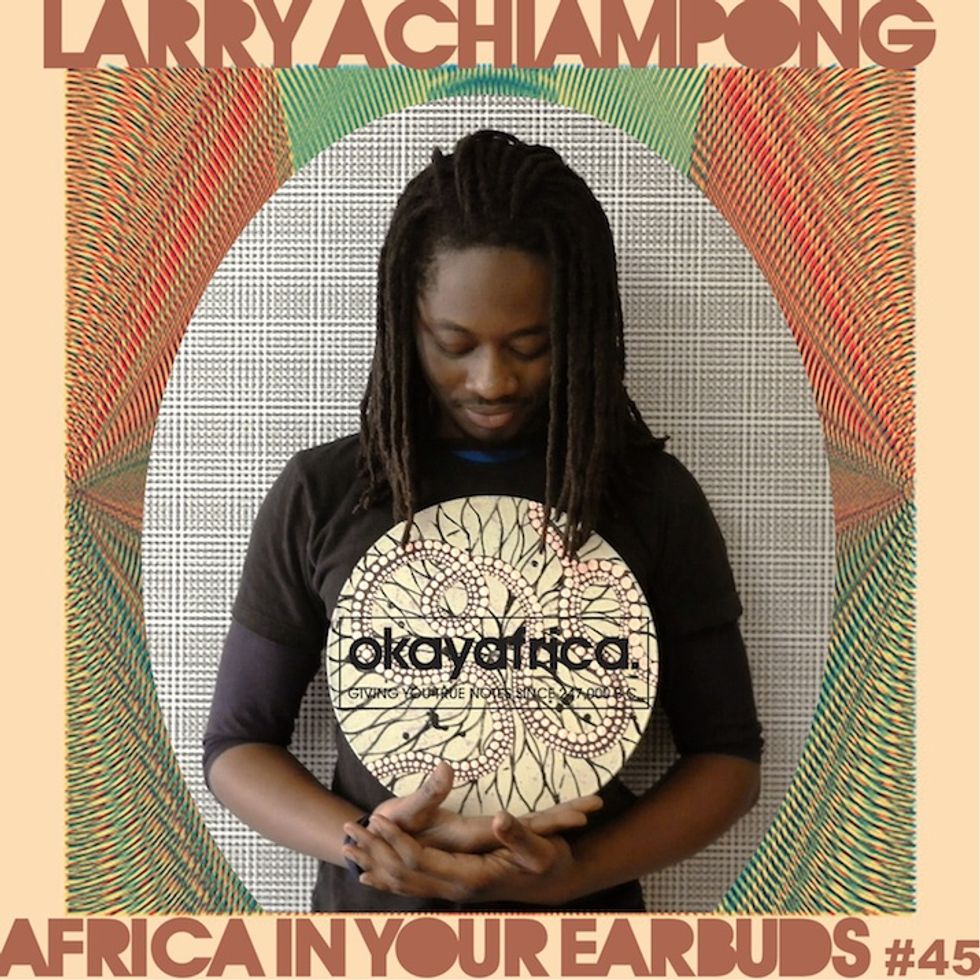 Download an African music Africa In Your Earbuds mixtape from Larry Achiampong.

London-based producer Larry Achiampong stumbled onto our radar through his stellar More Mogya LP, in which he flipped vintage Ghanaian highlife records and placed them on top of alluring hip-hop beats. Larry wrote extensively on the creation, history and meaning of his Africa In Your Earbuds mixtape, so we'll let his words do the talking:

With this mixtape, I intended to... amalgamate moments from both my audible heritage and musical-related experiences of my upbringing. African music, especially highlife, were a strong part of my childhood. My parents did a good job in retaining... their collection of highlife jams that they brought from Ghana in the early 80s and would play such classics as Alhaji K. Frimpong’s KyenKyen Bi Adi M’awu. To hear that unmistakable crackle from the vinyl always gave me joy and for some reason I have since that moment continued to associate the vinyl crackle with the sound of something cooking in the kitchen. I think that is why I love playing vinyl, because of its strong connection to memory and ritual.

To... see my uncle crafting mixtapes by mixing highlife classics with American Disco and R&B was a sight in itself. I watched him like football fans might their favourite player – I could see how much he was in love with the sound and how it made him happy... I wanted to feel what he was feeling, to be in on the secret that had his spirit so sprung... My father also played in a band at a church that my family attended for many years in south London. One of the strangest things I found about this band was that they never really had rehearsals, all of the guys were family men and had to hold down their responsibilities with their full time jobs, but they sure didn’t sound like a band that never had time. They were always tight, they had that unique ability to jam and work into each other’s contour in a way that made you believe a higher spirit was with you.

Moments like the ones that I’ve described above as well as experiences like hearing my first hip-hop album in NaS’ Illmatic, listening to makeshift pirate radio stations… these pockets of experience are connected to [a] second thing that I wanted to do with this mixtape: to re-present some of those elements of nostalgia via my music production efforts.

Stream and download Larry Achiampong's Africa In Your Earbuds #45 mixtape below, which features Larry's original productions, a good amount of Madlib beats and plenty of vintage highlife. Big thanks to Underdog for the cover artwork [original photo of Larry Achiampong by Kate Keara Pelen]. Hear more gems from Larry Achiampong over at his bandcamp / facebook /website

9. "Some Jokes Are Expensive" By Larry Achiampong