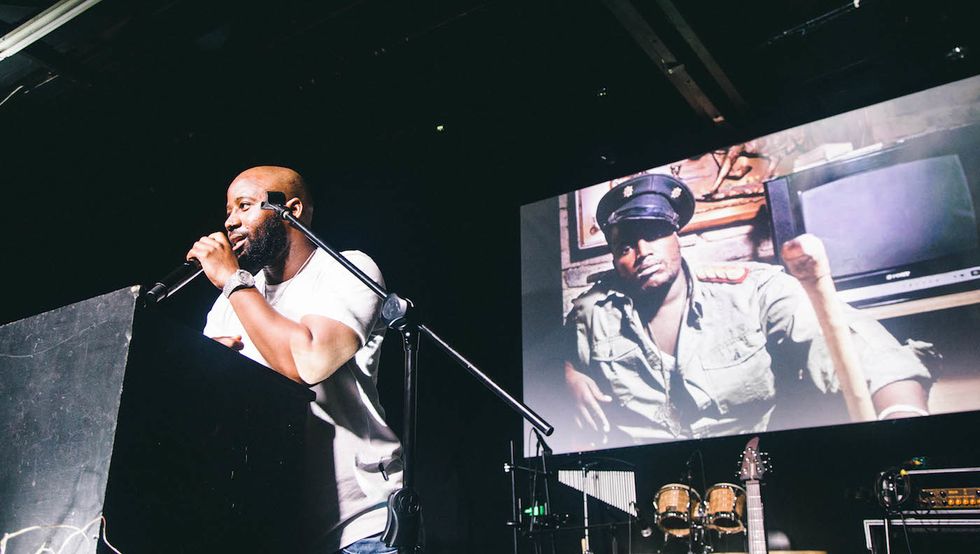 Speak of being in the right place at the right time.

The song that introduced Cassper Nyovest, who is now the biggest rapper in South Africa, was "Wamo Tseba Mtho" by the late HHP. The song was a single off of Jabba's 2009 double albumDumela.

"Working with Jabba for the first time," recalled Nyovest at Jabba's memorial service held in Newtown, Joburg yesterday. "I was taken by Thasman (the producer Thaso) at 16 years old after dropping out of school. I came to Joburg doing this music thing, everybody thought I was crazy. I was living in Thaso's house, and one day I woke up and saw HHP's car outside. So I walked into the studio like I didn't know he was there. And, on the spot, he was playing 'Wamo Tseba Mtho,' and he's like, 'Yo man, I think you'd be perfect for this song.' Jabba always put you on the spot, and he expected you to rise to the occasion. And that's how our relationship started."

Nyovest would later become Jabba's hype man and appear on more of his songs and music videos, including "Padapa" and "Bosso." "We shot the video [for 'Wamo Tseba Mtho], and much later," said Nyovest, "I started travelling with Jabba. He used to pay me for every show. That's how I got a source of income. My biggest dream at the time was to sign to Jabba. And he told me I'm not an artist that should be signed, I could be a businessman, as big as Lil Wayne, he would always tell me that. And I was thinking this guy is crazy, I'm hungry, I'm just trying to release this album."

Read: Amu Shares The Story Behind HHP's 'Thank You Note'

"Eventually, I ended up having to do my own thing," says Nyovest. "He was right; I ended up blowing up in a way I didn't understand. My success was really really crazy, and we drifted apart. I was very busy, he was very busy. There was a lot of assumptions. Long story short, me and Jabba had a very big fallout. But I'm proud to say never once did I, in public, disrespected him. And I'm so glad I didn't because those are the videos that would be circulating on the Internet now."

The MC during his speech described the last time he saw Jabba, two weeks ago. The late veteran remarked that Nyovest hadn't been keeping in touch with him. "And I said, 'I sent you a text,' and I showed it to him," says Nyovest. "There's actually a short video of me and him talking, he looked me in the eye and said, 'Mara Nyovest, ke a go rata, jo.' And I told him I loved him too. He carried on saying, 'Ke a go rata,' and looked me in the eyes. We took a picture."

Touching on his relationship with Jabba, Nyovest said:

"We would speak for hours about God. It was so weird because a lot of hip-hop artists are not really spiritual. But we also connected on a spiritual level as my brother."

"I will remember him as one person who also talked a lot of wisdom," he continued. "The years that I spent with Jabba taught me things that I could have learned in 20 years if I was alone, but he taught me in a short period. He's put us on the spot to say that we need to love one another more, that was his biggest message, and that we need to love God."

Nyovest recalled the first time he saw the legendary rapper. "I said to my mother, 'This guy is a celebrity, I wanna be like him one day,' my mama didn't understand.

"The first time I spoke to him… Jabba had this thing of greeting you like he knew you even when he didn't. The first time I met him, he greeted me like, 'Lenyora, lenyora, whuzet?' and I felt like he knew him, but then I later learned that this guy greets everybody the same way."

On what Jabba and his music meant to him as a youngster, Nyovest said:

"I speak on behalf of all the kids from Mafikeng, BaTswana… Jabba gave us a sense of pride and a sense of belonging through his music."