César Vargas: How I Became Black 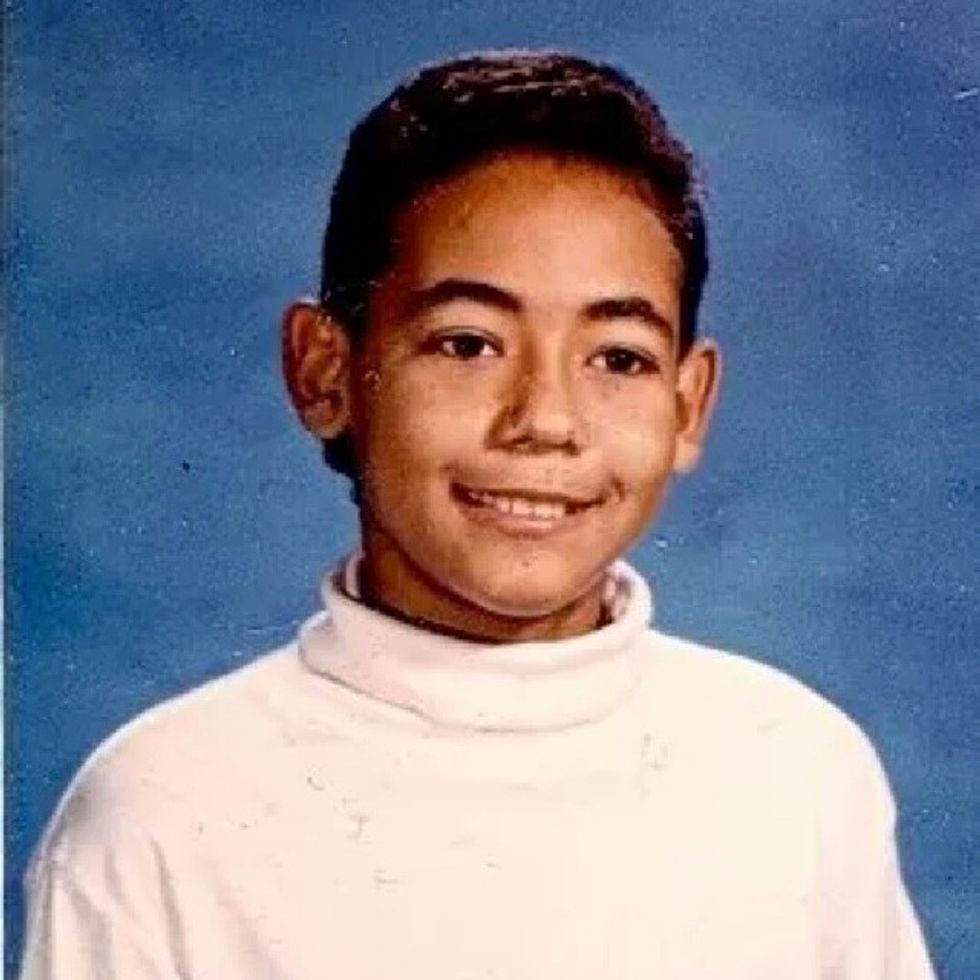 The author in his junior year of high school.

Growing up Dominican in New York City, writer and activist César Vargas had a tough awakening to racial identity.

During my first day of school in the United States I was told by a fellow classmate to watch out for the morenos. I was taken aback by the warning and in my bewilderment asked how to tell them apart. As a teenager trying to find his place in a new country, race was a difficult concept. I couldn't tell people apart based on it. This gave me a disadvantage navigating 90s pre-gentrified Bed-Stuy. My high school, I.S. 33, was an all Black school with the exception of a few American-born Latinos—mostly Nuyoricans—and the bilingual class that I was placed in.

Sosua in the Dominican Republic where I was raised is a small tourist town with a very diverse population. Back then I was already exposed to white Americans, Europeans, and Black Haitians. All who, phenotypically speaking, looked like relatives since my family fell within the spectrum of Black to White. Which might be the reason why I couldn't tell morenos apart from the rest of my classmates and family. Some of them were the same color as those morenos they were so apprehensive of.

My bilingual class was their punching bag. We were bullied relentlessly. For being foreigners. For speaking Spanish. For being different. That all stopped when two fresh-of-the-boat Dominican brothers that were brought to our class started fighting back. Both were as dark as the African American kids they fought. These two (Santiaguero city-slickers, it should be noted) emboldened the rest of us to do the same. So it was chaos for a couple of months.

Soon enough I understood why my classmates were fearful of morenos.

My family in the DR before I came to the States. (I'm the one to the left)

After many fights and suspensions later we earned the respect of the young morenos, but not before shedding our immigrant Urkel-like clothing, embracing Hip Hop, and learning ebonics—a language I learned before “proper" English. All these things were survival mechanisms that soon came so naturally to me that for the first time in my life I wanted to be a moreno.

I wanted to be Black so badly that—the one drop rule notwithstanding—I studied and emulated the urban Black youth to the point of faking an underbite (I'd seen Redman and Method Man do the same in music videos) which I subconsciously still do today.

In the 'hood, the African American youth took the apex position. Puerto Ricans were next, and right below them, Dominicans. Mexicans and other Latin American kids were treated the worse. No amount of assimilation prevented them from being a target. Life in the United States is rough for an immigrant, especially children and teenagers. Puerto Ricans were given preference and I suspect it's because they were the first wave and the most prominent Latinos in New York City at the time. Most of them were born here and already spoke English.

Dominicans were just getting through the door, and they, along with other Latin American immigrants, were suspicious of Puerto Ricans for being cozy with the morenos. It was obvious for a kid thrust into a new world to want to be like those running things and because some of us lighter teens couldn't pass for morenos, we had to lie about being Dominican so as not to get jumped by both Puerto Rican and African American teenagers and their older siblings. It was all a clusterfuck of ridiculousness, but it was real, and I had to be conscious of all that back then to survive.

In Brooklyn circa 1995. I'm carrying my sister, and my brother is on the hood of my stepdad's car.

Any Black people from anywhere around the world can come to the United States, and within a generation or two, their children are considered African American, except for Afro-Latinos. Afro-Latinos are a minority within a minority: Black and Latino. They fear joining the African American community for fear of getting shunned by other Latinos (white and indigenous) and because African Americans have historically shunned them too—until recently, and mostly to condemn them for supposedly denying their negritude.

Latin Americans dislike Dominicans for being Black, associating us with an undesirable underclass. We're called all sorts of names but one specifically cuts deep: “negros sucios." They call us “dirty negroes." Despite the negation of our bodies, appropriation is rampant. They, too, enjoy our culture once it is whitewashed, but not our struggles.

Dominicans are as mixed as African Americans, but they don't adhere to the very American concept of the one-drop rule. The indio, mulato, trigueño, and all the other names within the color scale Dominicans use to identify with is a negation of sole Blackness, but no Dominican identifies solely with Europe or denies having African heritage.

One of the most troubling things I've heard about Dominican identity was from Dominican anthropologist, Juan Rodriguez, during the Dominican segment of professor Henry Louis Gates, Jr.'s Black in Latin America PBS special. Rodriguez told Gates he had to leave the Dominican Republic to learn that he was Black.

In other words, he had to learn about his racial makeup in the United States. He couldn't even trust his own Dominican teachers and he rebuked the Dominican identity for the one the United States gave him and his people. Even our esteemed anthropologists fall for the appeal to authority fallacy. Incredible. Even American born and raised Dominican students do the same, according to Silvio Torres-Saillant, professor of the English department and former director of the Syracuse Latino-Latin American Studies Program. He, too, says he learned he was Black after leaving the island, but without the condescending contempt Rodriguez has for how his people identify themselves.

All of these things I took into consideration before coming to my own conclusions about my own identify. I first didn't know I was Black. I then wanted to be Black. I knew I had African ancestry throughout High School and beyond college—to the point of calling myself a mulato. I might be “mixed" in the Dominican Republic, but here, in a foreign land that I now call home, I am Black. Not because American anthropologists or society tells and treats me like so—and believe me, they have—but because I choose to. I am Black through my own accord.

César Vargas is a writer, producer, activist, and social media PR and marketing strategist. He founded UPLIFTT (United People for Latinos in Film TV and Theater) and is president of Burning Ones Productions. Follow him on Twitter and Facebook.