Jidenna tells us why he partnered with OkayAfrica to design his official tour T-shirt and what style does to a person's psychology.

When Jidenna asked OkayAfrica to design official merch for the ongoing "85 to Africa" tour, we had to create clothing suitable for the Classic Man himself. The result is a collection reflecting the ambitious mission of his new album—to forge a universal African identity across the diaspora. We reached out to Jidenna, on the road between gigs, to hear about the tour and to find out more about the different pieces in the collection. 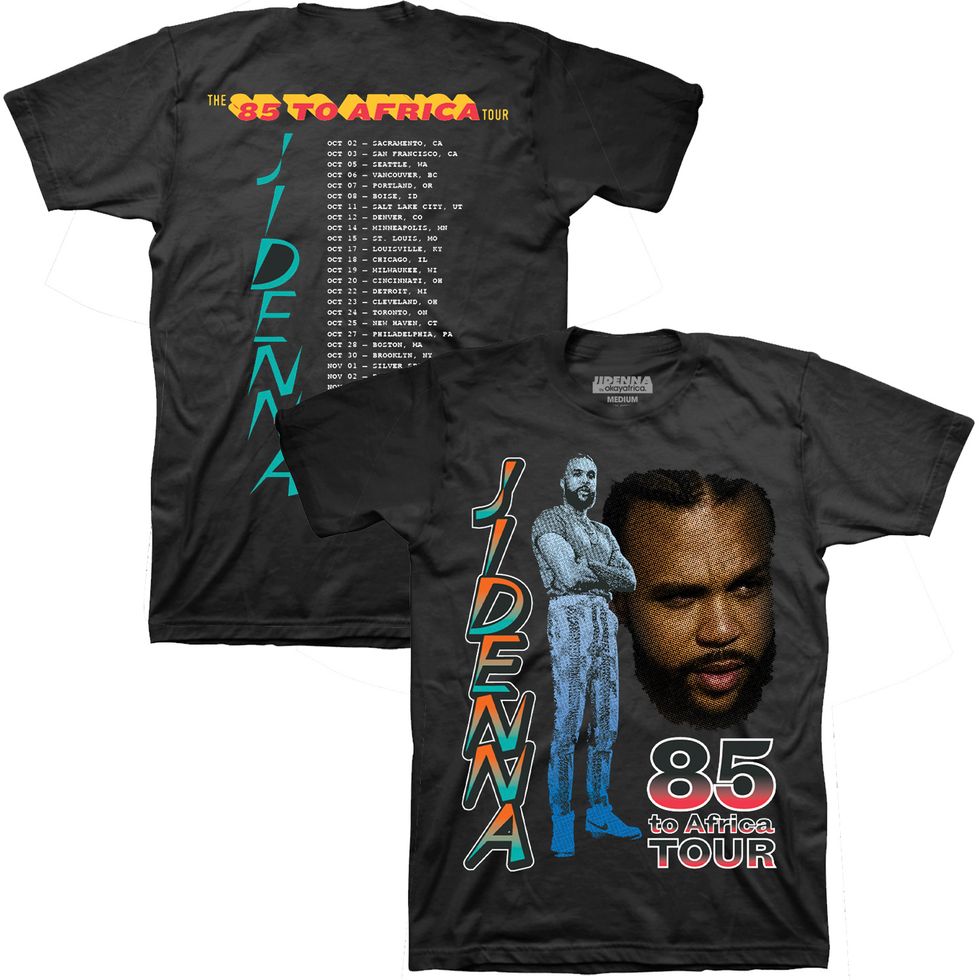 "I really love the actual tour shirt because it looks like this vintage late nineties wrestler or rapper shirt, which people love, "Jidenna tells us. "I think that that's why that shirt is doing so well. They'll remember the tour every time they see that shirt. So I love that." Find the official "85 to Africa" tour T-Shirt at the Okay Shop 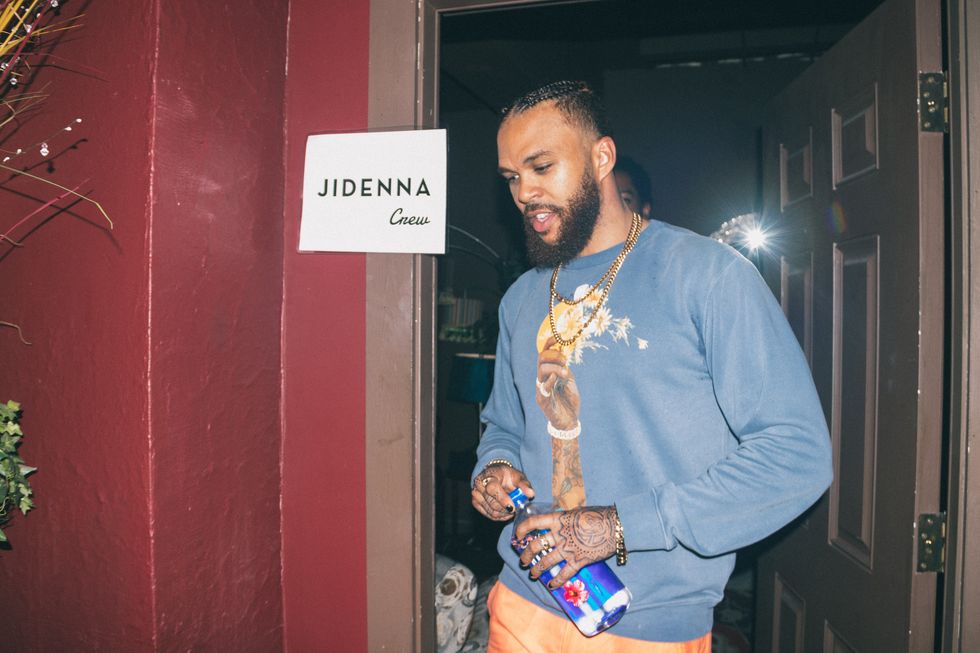 Another of his favorites is the 'Pretty & Afraid' design available as both a white T-shirt and a powder blue crewneck sweatshirt that Jidenna is wearing in the photo above.

"Right now, literally as I'm speaking, I'm wearing what we call the Pretty & Afraid shirt, which has this tatted hand with some little rapper jewelry reaching up holding flowers—some dandelions. That was part of a larger concept we have for Pretty & Afraid, which speaks to black male vulnerability and the ability to affirm the low moments, and stray away from always having bravado or feeling the need to always puff the chest. There's true might in vulnerability and this shirt, I think that it plays with that duality. 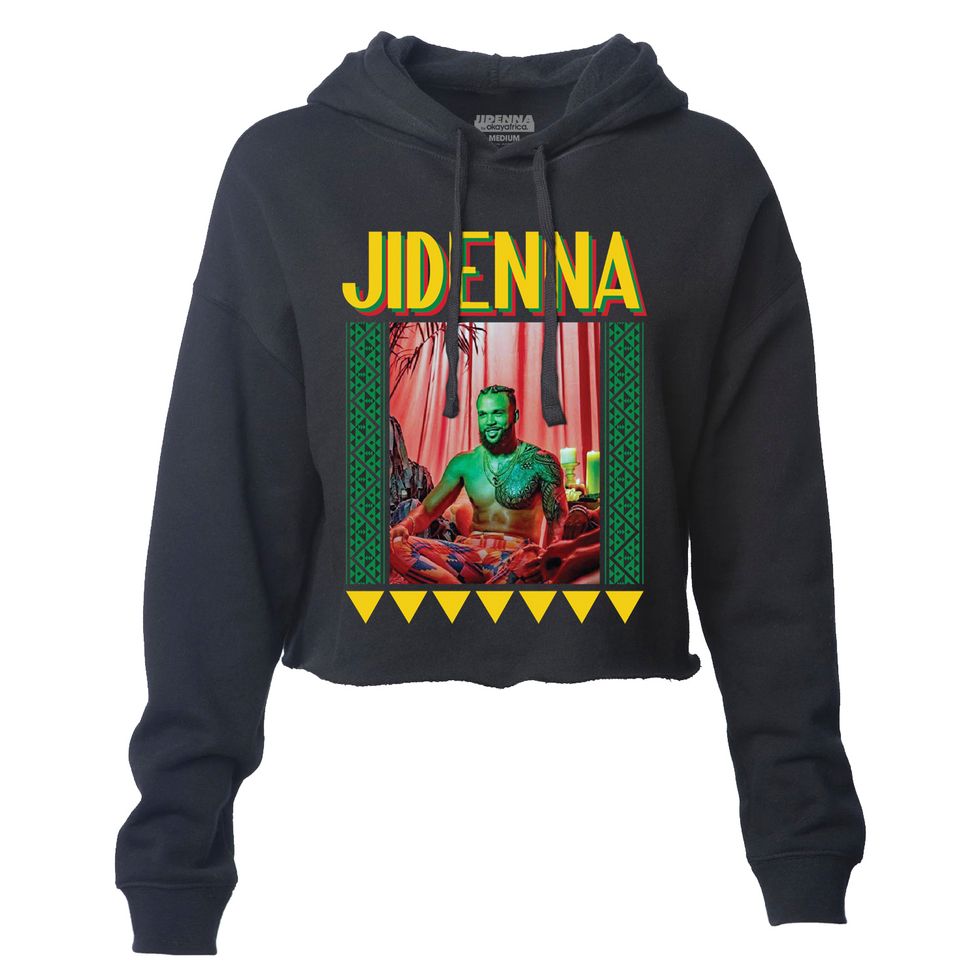 Besides the official tour tee shirt and the Pretty & Afraid designs is the crop top hoodie which melds a 90s pan-African vibe—think "Do the Right Thing" and Native Tongues—with Jidenna's contemporary diaspora style, creating something rather unique. Buy the crop top women's hooded sweatshirt at the Okay Shop.

We asked Jidenna what performing his new songs have been like on tour and how audiences have been reacting to the African influences which he put front and center on the album.

"The tour has been fantastic, magnificent, swankadelic, everything that I hoped it would be. There's this Afrobeats medley that we do, where a few dancers—just people from the audience—come up and do their favorite, you know, Zanku-style or whatever. Those are the truly memorable moments. And audiences have loved the African influences in the music. Towards the end of the show, I get a chance to just speak my mind on a few subjects, but mainly subjects that relate to the diaspora unifying with the continent, which is at the essence of the album. So that's my favorite moment. 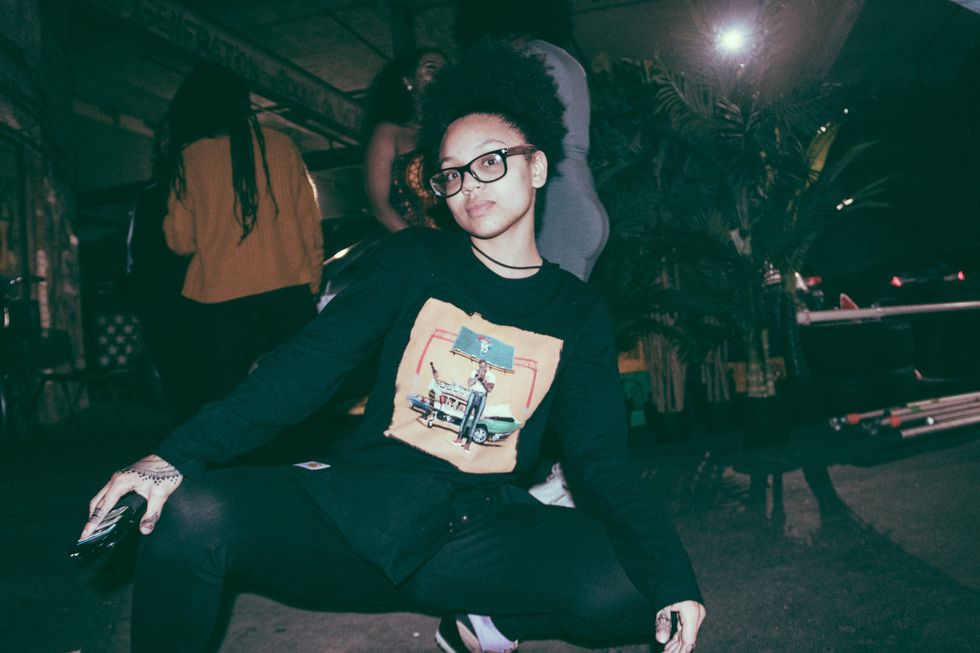 One of the purest visions of that diaspora/continent unity is the new album cover with its traffic jam of painted mini-busses, scooters and candy-colored drop-tops with Jidenna himself in those signature ankara pants. The "85 to Africa" album is available on limited edition translucent orange vinyl or you can wear it as part of the album cover longsleeve T-shirt. And while the album cover feels like a nod to one of Fela's classic covers, the set design for the tour, Jidenna tells us, definitely is.

"It's inspired," he says, "by a mixture of Fela Anikulapo Kuti's original Shrine in Lagos, the Kalakuta Republic, with a kind of down-home country and Southern style, corrugated zinc farm." 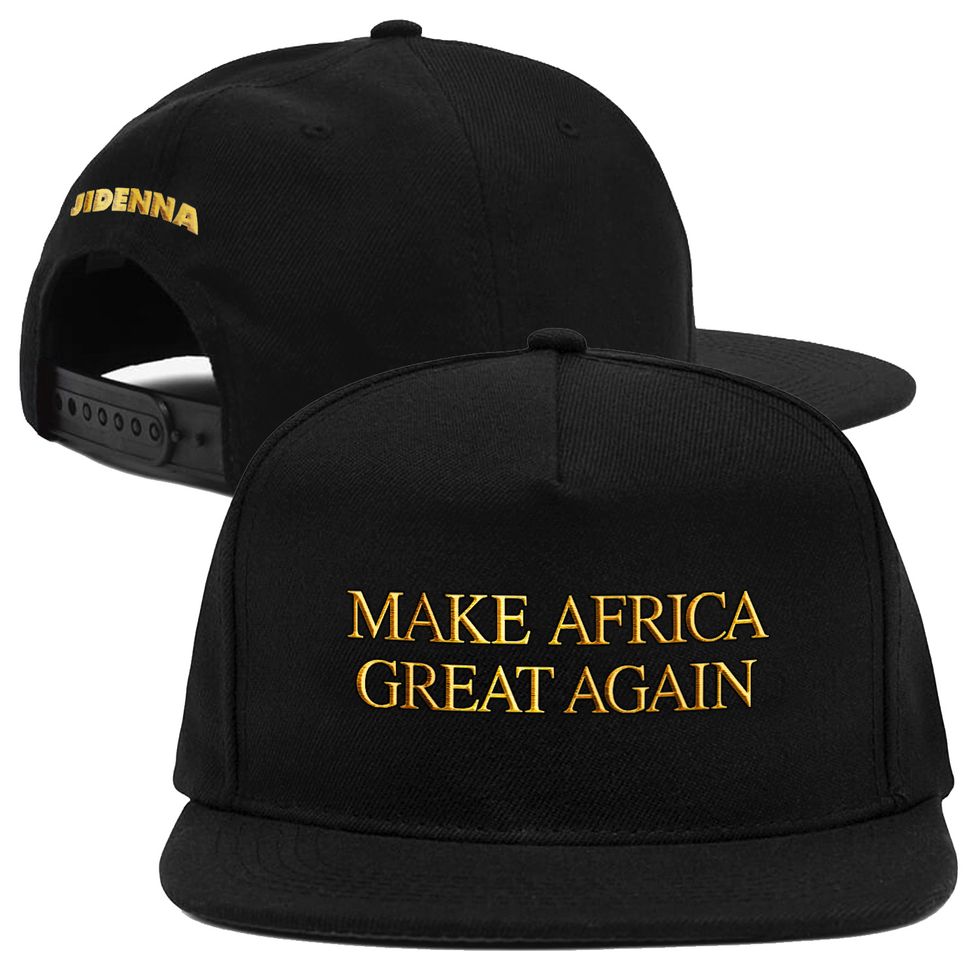 "Style speaks before you even have to open your mouth," says Jidenna. "As soon as you walk in a room, what you wear, what you don't wear, how flashy or how not flashy you are. It all exudes something. And I believe that the uniforms that people wear affect their psychology and it affects how they interact with each other.

So when you fold in African styles, patterns, colors, figures, iconic imagery that connects the diaspora and the continent, what you get is a sense of self worth. And when an individual is tied to a larger group, that pride is infectious. It makes people that don't usually wear things related to their African identity more comfortable. It gives them permission to recognize that in themselves. So I believe the merch is a step in forging a universal African identity across the diaspora, across the continent. That's what I see when I see the OkayAfrica merch, with yours truly. All right, bless up. Thank you. Appreciate y'all for real." 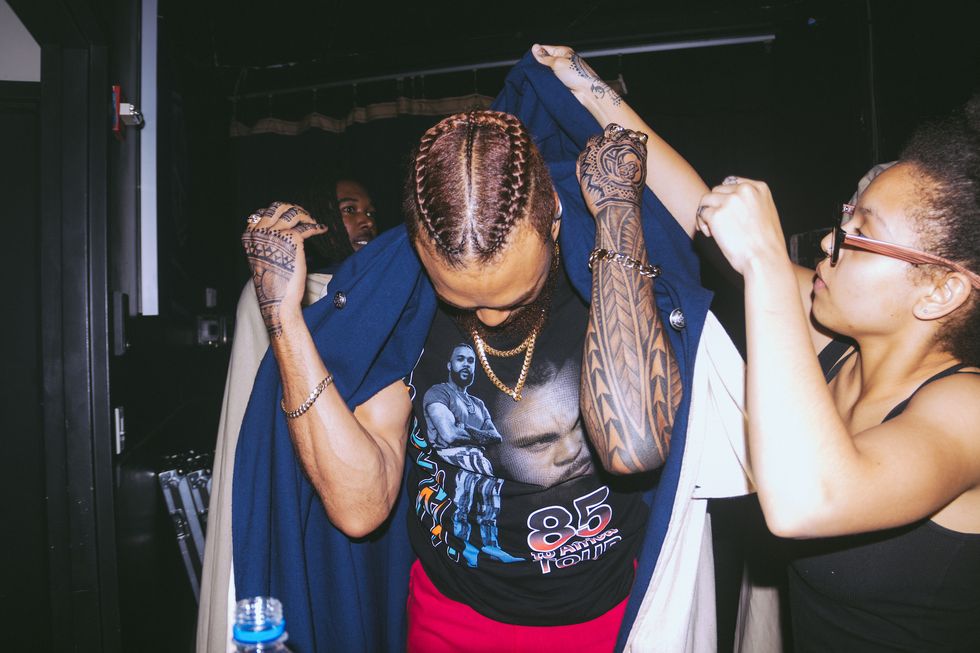 The "85 to Africa" tour runs through mid-November. See current tour dates on Jidenna's Instagram page. You can find the merch at a tour stop. But if you can't make the show, the entire "85 to Africa" merch collection is available for purchase at Okay Shop.

The Super Eagle's new kits are an impressive follow-up to the 2018 design.

Nike and Nigeria have done it again.

On Wednesday, the sporting brand unveiled a brand new Nigeria kit. This comes after the success of the wildly popular World Cup kit from 2018 which seamlessly fused streetwear with athletic function. The famous design was even nominated for the Beazley Design of the Year Award the year of its release.

The 2020 design is just as striking, featuring an angled, hand-drawn green design on top of a cream base. The Super Eagles's football crest is placed at the top front of the jersey, with the signature Nike swoop underneath. Matching sock sets were also unveiled for both colors of the jersey.

Founders of the popular brands discussed all things African streetwear in a conversation facilitated by OkayAfrica and moderator Amarachi Nwosu.

Moderated by Melanin Unscripted creator Amarachi Nwosu and presented in partnership with OkayAfrica, the design-based conversation explored everything from sustainable practices in manufacturing, to the overall evolution of streetwear globally. The founders of Free the Youth, which was been called Ghana's number one streetwear brand, expanded on how they've been able to build their audience, and shared details about their community-based initiatives.

They event, which took place at the Daily Paper Pop-up Store in Accra last Friday, drew a fashionable and creative-minded crowd ready to partake in a design discussion between West Africa and Europe.

Check out some of the action that took place at the Daily Paper x FYT event below, with photos by Abena Boamah.

Following his debut EP 'Croc City Boy', the US-based Nigerian artist is back with another banger.

Last year, Benson released his critically acclaimed debut EP Croc City Boy which One Tribe Mag described as "an introduction into the artist's mind" and the result of him "sticking to his dream and crafting his own sound".

More recently, the up-and-coming artist is back with another undeniable banger.

Listen to Rema and Becky G's Remix of 'Dumebi'

Rema features Becky G in the remix of his 2019 hit single 'Dumebi'.